Nothing shuts down Main Street during an Indian wedding quite like the boisterous, colorful, music-filled baraat. When you envision your dream wedding, Indian baraat images are sure to come to mind as the lively procession of your groom making his way to the wedding venue truly sets the tone for the entire day. Laughter, dancing, cheering, and excitement... the baraat is the ultimate way to kick off wedding festivities in New Jersey, Central New Jersey. 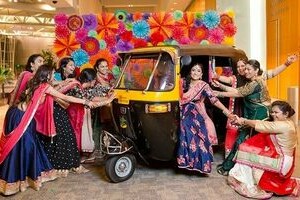