Happy Wednesday Maharanis! Today we have an action packed wedding presented by Wedding Documentary Photo + Cinema full of culture, fun and celebrations. There is an endless amount of wedding inspiration brimming from Swetha and Ashu’s and we can’t wait to share all the details with you all. If you are a Maharani seeking for inspiration for your big day, the next few weeks are going to be your best friend. Swetha brought on planning and design planner Mandy Scott Events to help curate her multi day event. One of the most treasured memories of the wedding celebration was the celebration of Holi! This special day was especially memorable as Swetha’s own parents wedding anniversary happened to fall on the day before her own. As the bride has quoted to Maharani Weddings, “It was a really cool way of paying homage to my parents' own marriage and celebrating a holiday that was really important to us. Our guests got take part in the revelry and fun of holi -- and let loose!” This was a special event full of culture, traditions and of course colorful powder that permeated the air and kicked off the wedding events! Guests were given the full Indian treatment complete with the bride and groom’s favorite street food with catering by Amber India! Swetha pours her heart out below with details of her love journey and it’s one of the cutest we have ever heard! Check out the deets after you brim through her love story that we have arranged for you in the gallery. Have you taken a gander at our 2016 Unforgettable List Magazine? Take a look at the glossy pages for this featured wedding! 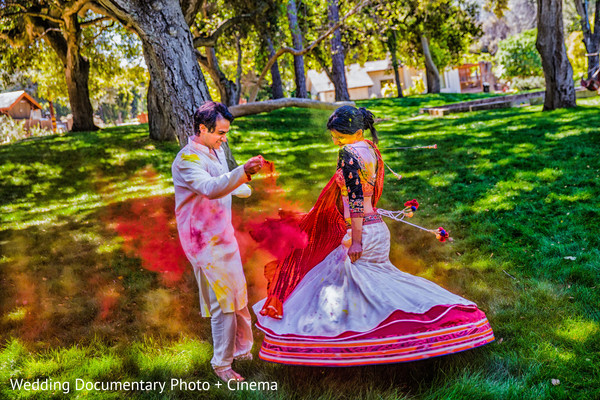 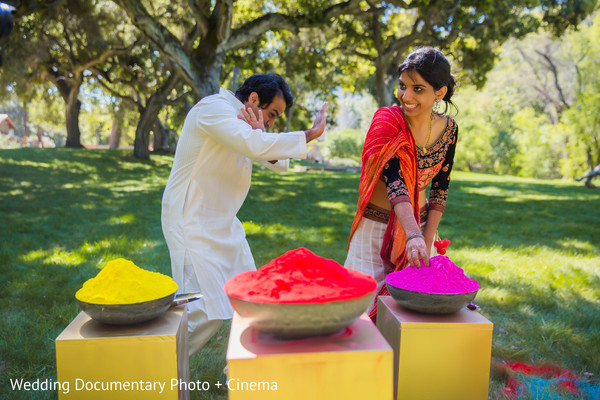 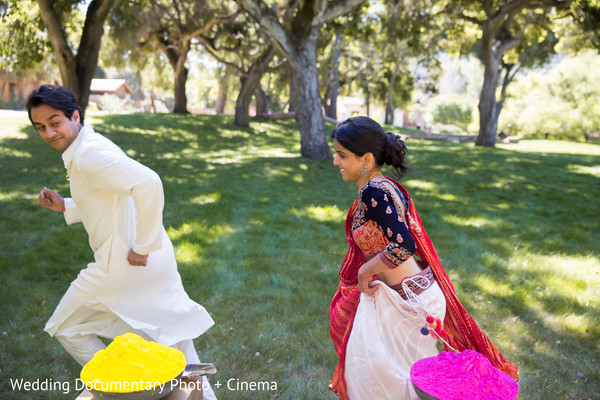 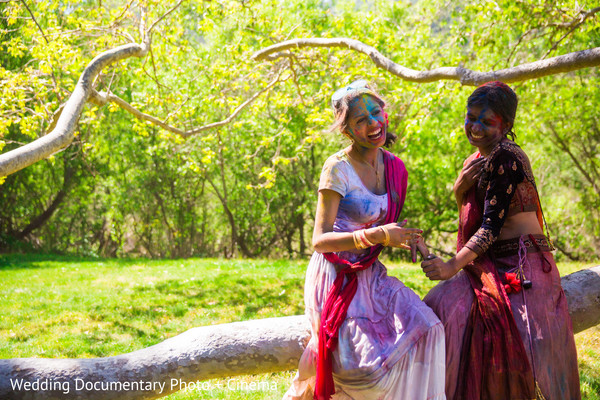 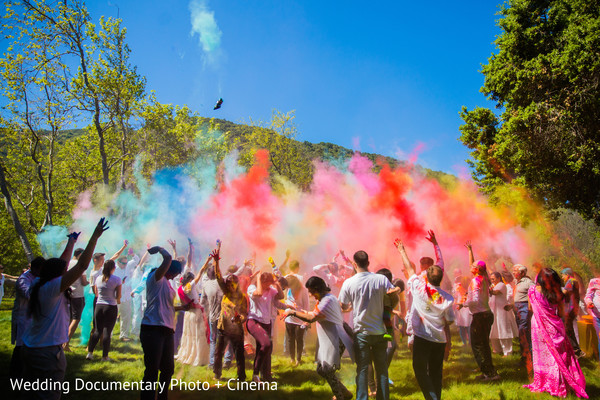 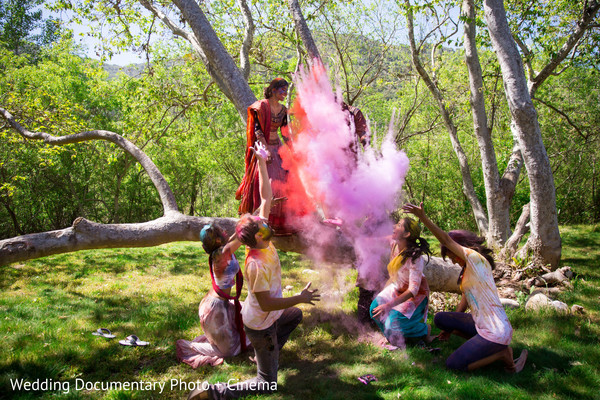 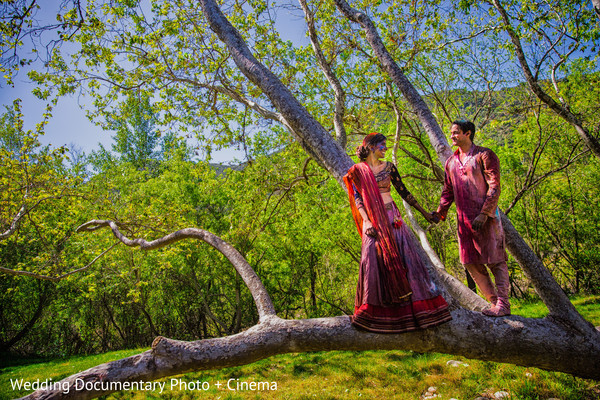 How did you meet your Groom and when did you know he was "the one"?
Ashu and I met about five years ago in Bombay at a work event! We had both just moved to India from the US about six months prior, having left our finance jobs in New York and Boston, respectively, and traded these jobs in for new careers -- international development for me and impact investing for him. Ashu was friends with many of my colleagues in India and we were hosting a networking event on behalf of one of our clients. Ashu came to that event and we were introduced then. We had what Ashu calls our first date a few weeks later. We didn't end up dating, then, however, and instead remained part of the same friend circle. Ashu moved back to the States a year and a half later and that was that. Only when I came back to the US during a winter trip several months later did we recognize the intensity of our feelings -- which somehow hadn't dissipated despite time and distance -- and agree to give a relationship that was two years in the works a chance. I guess I implicitly knew for a while that a relationship with Ashu was worth fighting for, but that trip back to the States was when the concept of a relationship finally crystallized.

Starting a relationship nearly 10,000 miles away is fraught with its own challenges, namely logistics. We were committed to trying to see each other as a way of making this relationship work, so the first time -- we met in Morocco! We both thought it was a little nuts to travel for 10 days with someone and I think knew would tell us whether this new "relationship" would work or not. Most of our friends told us we were crazy. We had a magical time in Morocco and I'd say that's when we both had a strong sense that the relationship might work out.

We then did international long distance for a year and I traveled to the States in between and during projects (stopping over in SF during trips to Latin America, meeting in NYC for two days, or flying over for a weekend from Indonesia. It was actually all kind of absurd and straight out of a movie). Ashu came to Bombay that December -- we traveled some more -- and I moved back to the States. We'd come full circle.

Share the scoop on your Proposal Story!
Hah! So this was -- almost -- a complete surprise. By the summer of 2016, Ashu and I were quite serious but hadn't formally discussed getting married, or timing, or logistics. And importantly, he hadn't actually met my parents. In July, I finally worked up the courage to let him meet my parents, so we took a trip out East to Virginia where my parents live. After we came back from that trip, we went ahead with planning summer travel and made plans to go to Indonesia -- which I'd fallen in love with the year before -- for 10 days, in part to learn how to dive. I asked my best friend, Monisha, to join us.
About two days before the trip, I got an email from Ashu on my phone. I tried to open it up using my phone app, but it didn't appear, so I opened up the gmail browser to get the email. The email said something along the lines of "It's all up to her from now. I hope she says yes." Turns out the email was to my mom (whose email we'd logged into a couple of weeks ago when I was at home with her) and not me. Once I recognized the email wasn't for me -- I panicked a little and stopped reading the thread but it still didn't dawn on me that it was about a potential proposal. For example, I thought that maybe he was just telling my parents that we were going to Indonesia together, but nothing really made sense except the possibility that he was going to propose. totally confused, I left the apartment, took a walk and determined to forget about it. The next day, I called a my other best friend, Sharmi, and tried to get her to tell me that I was crazy for even thinking of such a thing!
In any case, we went to Indonesia, learned how to go diving and then went to a beautiful, super remote island named Moyo off of the coast of Sumbawa. We'd planned to take a hike up to a point named Crocodile Head after some massages we'd planned to get. Ashu said he'd needed shoes from his bag so asked the hotel to bring his bag; instead they brought his shoes. Flustered, he said he needed to go back to the room. I was happily enjoying my massage -- not quite understanding why he really needed a specific set of shoes.
He came back and we nearly had to sprint to get to crocodile point, where the sun had just started to set over the pacific ocean. By that point, I wondered but had also dismissed the idea that he was going to propose -- particularly because his pocket seemed rather flat (i.e., no ring box, but also a ring didn't really seem like his style anyway). It also seemed like a futile thing to worry about. I sat down on the bench to look out at the view when all of a sudden "Madam, I have a question." I was totally stunned -- time just paused for a few seconds while I didn't say anything (it mustn't have been a long time but it FELT like it was forever) before I caught my breath and said yes (and then wondered what I'd just agreed to!).
Poor guy asked me a few minutes later if I'd been surprised. Instead of saying yes, I fumbled with the story about my phone and the email I wasn't meant to see. To this day, it's the surprise that wasn't quite a surprise!

We have the stellar wedding coming right up with some live music from the one and only Kukoo G. Singh! See you in a bit!