Our Pakistani bride opens up her palms, and we get to see the amazing mehndi work by Bridal Elegance by Suman Khosla in great detail. The coloration is a dream and the incredible design is what Maharani dreams are made of. Project Motive Photography stole some candid moments of our bride as she got ready, and I'm sure she'll be looking back at these scenes with great nostalgia in the future. As Styles By Swati tends to her hair, and Farzana Zaman does her wedding day makeup, we can only imagine the thoughts that are running through the lucky Princesses mind. All the Maharanis reading this that have been there are sure to know. Once she steps into her stunning, custom-designed, navy and red open shirt bridal lengha and completes her look with some of the most enviable jewelry we ever did see from Jewels N Gems — I mean, even her bouquet of red roses is decked out in gold and precious stones! — she's almost ready to reveal her look to the Raja of her dreams. Before we get into the portraits of our happy couple, do yourself a solid and head into the gallery for even more fashionable inspiration from our bride! 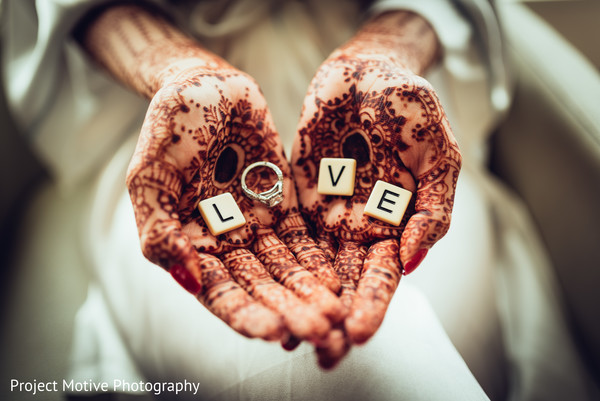 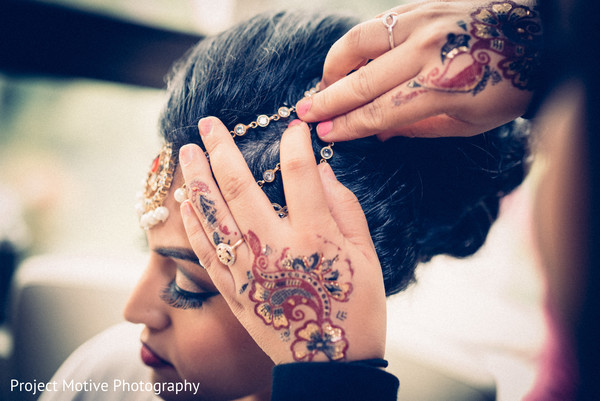 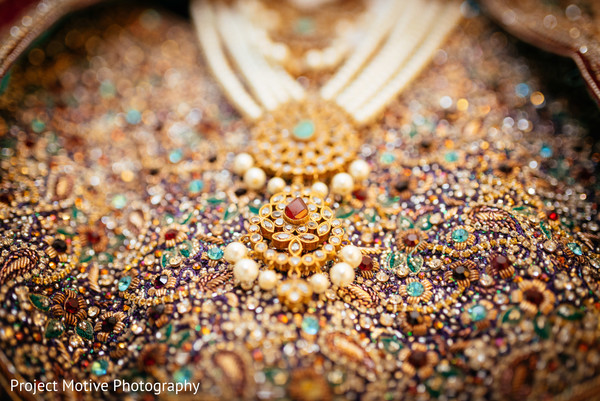 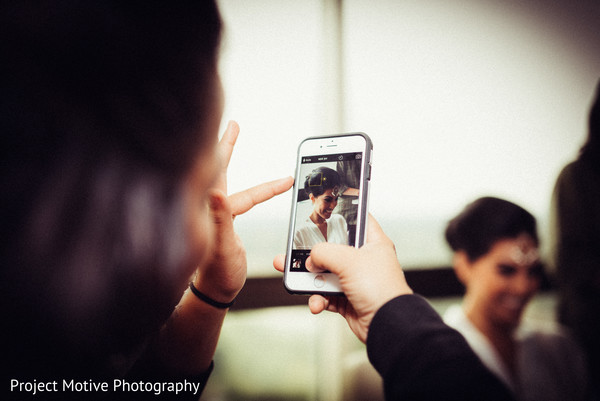 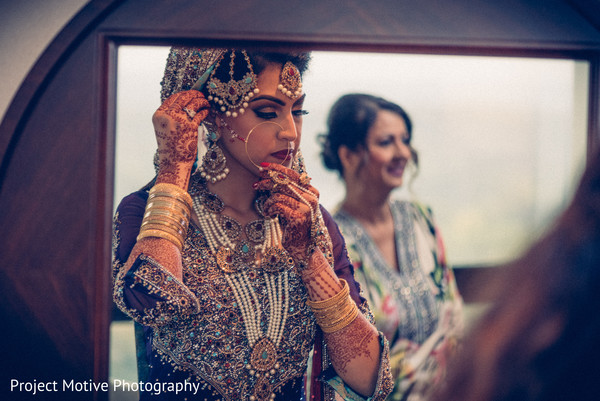 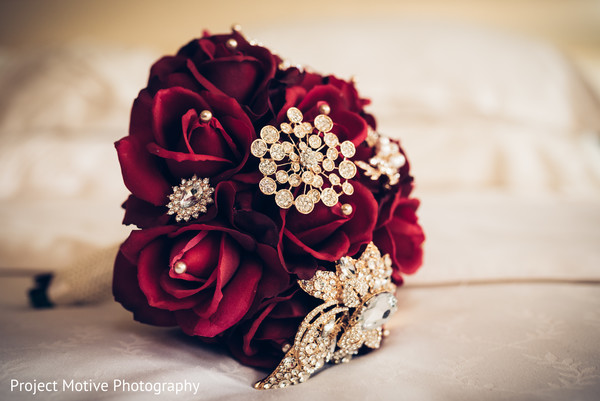 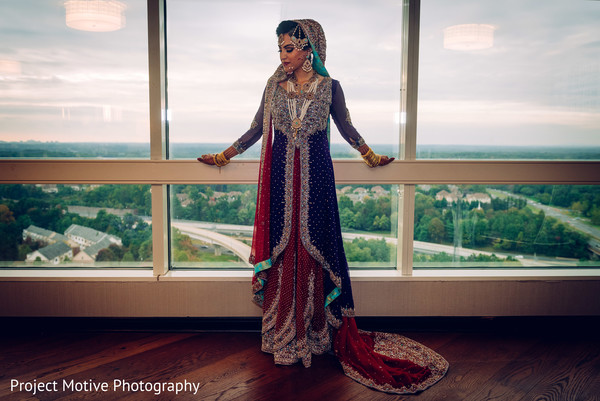 "Sobe had invited Hibah to accompany him to his office holiday party in Old Town, Alexandria on the evening of Friday, December 20th, 2013. His little sister, Muneeba, had come over that afternoon to help Hibah with her hair, before heading off to the movies with her best friends, Autumn and Bailie. Sobe went to Hibah's house to pick her up, however she was running (fashionably) late, as usual. He patiently waited for her, and once she was finally ready, they headed to Old Town. After parking, the two got out of the car and started heading toward the bar where the holiday party was being held. On the way there, Hibah noticed the large water fountain in front of Alexandria City Hall, where they had met for their first date. The two had an ongoing joke about this particular spot, so Hibah sarcastically asked Sobe, "remember that time we met?" They laughed about it like usual, and Sobe asked Hibah to take a picture with him by the fountain, since there was a beautiful Christmas tree in front of it for the holiday season.

Sobe asked a random bystander to take a picture of him and Hibah in front of the tree with his iPhone, and the two posed with a smile. Sobe then turned to Hibah, took her hands in his, and asked Hibah if she wanted to take a picture of them holding hands and looking at each other in front of the tree. Hibah teased Sobe for wanting to take such a sappy picture, but went along with it. The next thing she knew, Sobe was kneeling down on one knee. Sobe told Hibah how amazing the past 15 months had been with her in his life and how he was ready to spend the rest of his life with her. He told her that he had already received her parents' blessings, and that all he needed was hers. "Will you marry me?” he asked, as he pulled out the most beautiful ring she had ever seen. Hibah was speechless; her brain had ceased all functional abilities the second she saw Sobe kneel and realized what was happening. After allowing her brain to play catch-up, she said "yes!" Sobe then rushed off his knee and pulled Hibah into a tight hug. There were several people around the fountain, watching the proposal, who clapped as Sobe and Hibah were hugging.

As Sobe took her left hand to slip the ring onto her finger, Hibah realized someone was taking their picture with a professional camera. She turned to see that the young lady Sobe had handed his phone to was not a stranger, but Muneeba's friend, Bailie, who was a photographer. He had arranged for her to be there, with a scarf to cover her face so Hibah wouldn't recognize her. She had pretended to take a picture of the couple in front of the tree with Sobe's iPhone, but as soon as Sobe turned Hibah to face him, Bailie had pulled out her professional camera to photograph the entire proposal. Shortly after Hibah realized this, Muneeba and Autumn came running to them from across the courtyard, and they told Hibah that they had the entire proposal on video. As it turned out, the girls didn’t really have a movie to catch that evening. Hibah was in complete shock and couldn’t believe how much effort everyone had put into the proposal, for it to be such a memorable surprise.

The first order of business for the newly engaged couple was to call Hibah’s mom, who laughed with joy when Hibah told her the news. Sobe explained to Hibah that he had visited her parents earlier that week to officially ask for Hibah’s hand in marriage, and to tell them how he planned on proposing. He put Hibah’s phone on speaker to tell her mom that they were going to his office holiday party and would be coming over a little later that evening. Hibah melted when she realized that Sobe had even planned to take her home to see her family at the end of the evening (since she lived on her own). After talking to her mom, Hibah wanted to call Sobe’s mom as well, who Hibah found out also knew about the proposal all along. Hibah told Sobe that there were so many more people that she needed to call, from her best friends to her cousins, and her sister in New York, but Sobe insisted that they first stop by his office holiday party for a few minutes. Hibah was still in a world of shock, so she went along with it and decided to wait to let all of her loved ones know about her newly engaged status.

Sobe and Hibah headed to Two Nineteen, which was a short walk from the fountain where Sobe had proposed. Hibah walked into the bar only to realize that it was not Sobe’s office holiday party but in fact a surprise party with all of Sobe and Hibah's closest friends and family to celebrate their engagement, which was also coordinated by Sobe. He told Hibah that her mom knew about the surprise party at Two Nineteen, but he had told her that they were going to his office holiday party while she was on the phone earlier, so as not to spoil the surprise for Hibah. In order to pull the party together, Sobe had contacted two of Hibah’s best friends, Cati and Michelle, and her sister, Fasiha, to get all of Hibah’s closest friends together at the right time. Sobe and Hibah spent the majority of the evening taking pictures with everyone and thanking them for all their kind wishes. After the party, they went to Sobe’s house to eat dinner with his parents and share the news with Bella (Sobe's cat). Next, they went to Hibah’s house to tell Dexter (Hibah's puppy) the great news, and to pick him up to spend the remainder of their evening at Hibah’s parents’ house with her family. What started out as a simple office holiday party turned out to be the best night of Sobe and Hibah's life."

Stick around for some sensational first look details — coming up next!