Hello, my loves! We're starting today off with a fairy tale first-look session with KSD Weddings and it's pulling at my heart strings! These sweethearts bring the regal romance as they pose for pics in the most elegant wedding ensembles before heading down the aisle. I think it's so important to have a moment of peace with your love and capture those unforgettable snaps; because in the hustle and bustle of your wedding day, alone time is so precious! Head to the gallery to see every perfect portrait! 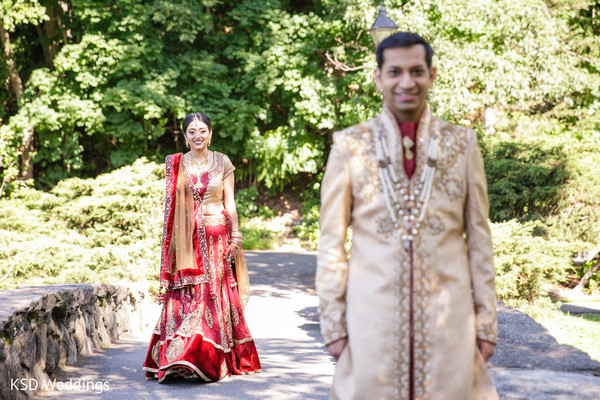 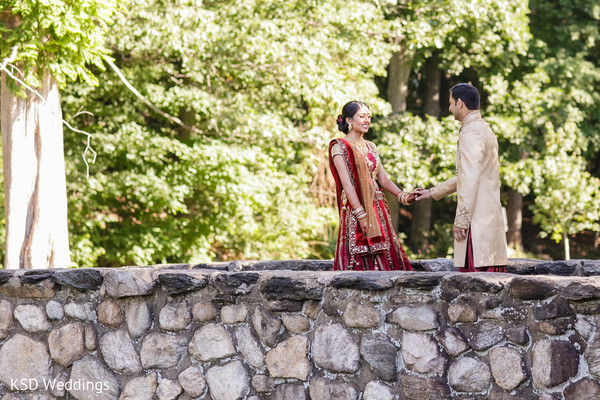 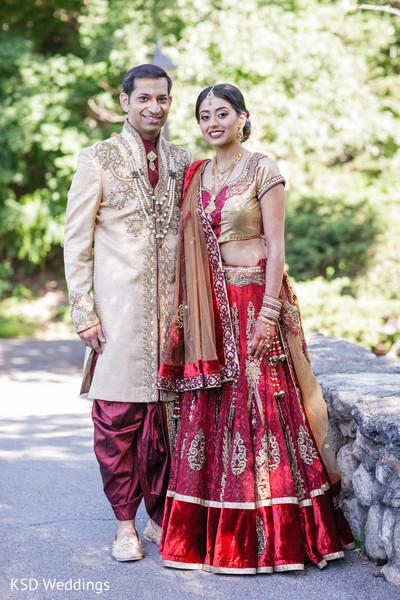 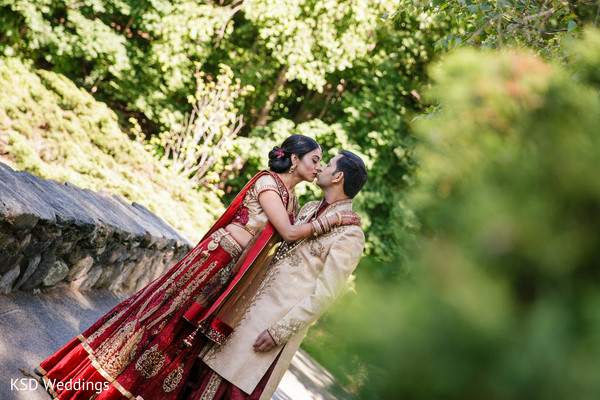 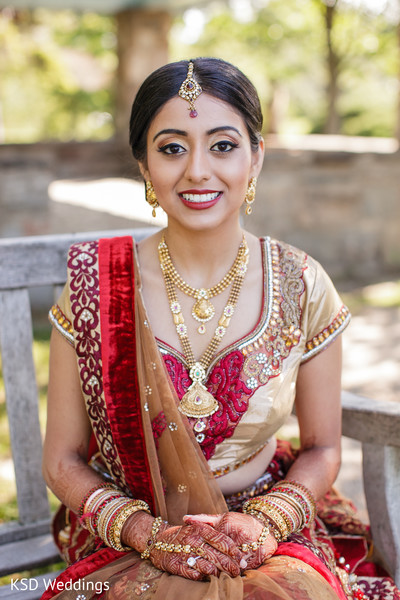 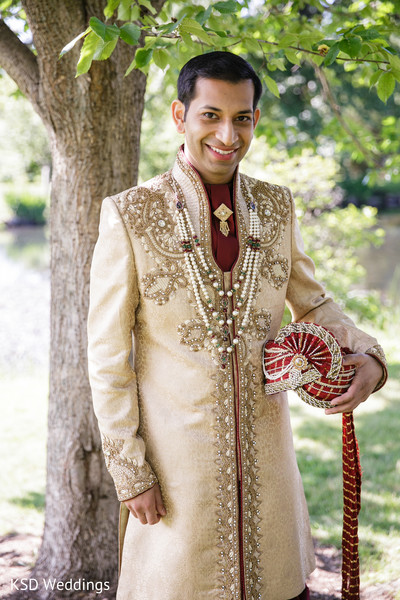 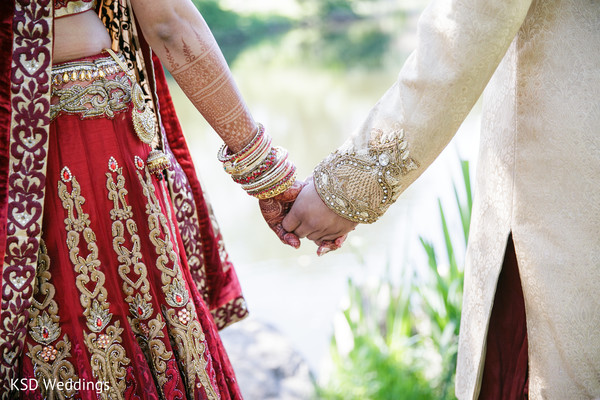 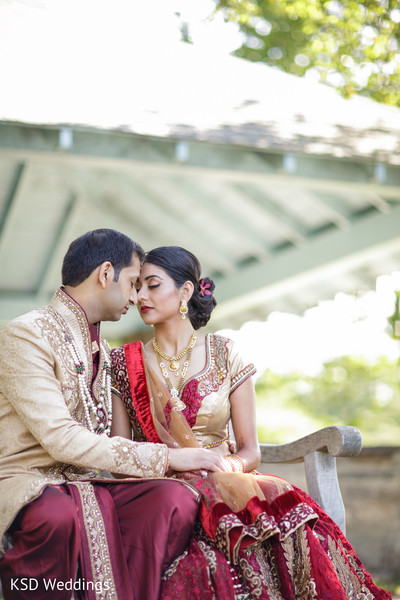 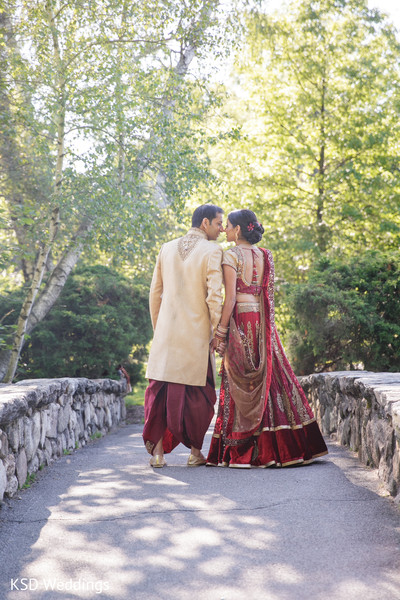 From the bride, on the proposal story:

"As a belated birthday present, I had purchased tickets to Jay Z and Justin Timberlake's Legends of the Summer tour for Vijay. It was supposed to be a surprise, but since I was so excited I couldn't keep it a secret and told him about it, two months in advance! Being the smart man that he is, Vijay knew the only way to catch me off guard for a proposal would be to plan it on a weekend where I would least expect it. So he began plotting for July 20th, 2013 to be the most incredible day of my life.

The day before the proposal, my mom had asked I take off from work because she had planned a 'girls day' so she could spend time with my sister and I. We were going to spend the day shopping and going to a spa to get our nails done- all before I headed into the city that evening to meet with Vijay. I didn't know this then, but planning this fun day was a scheme to trick me into getting a manicure, because my mom and sister both know a girl's nails need to be in top shape when being proposed to! As usual, the shopping portion of the day took much longer (thanks to me) which meant we had to cancel our nail appointment. I was bummed that I wasn't able to get my nails done and so decided it would be ok if I made Vijay wait just a little, while I quickly got them done in the city! Meanwhile, Vijay had taken the day off from work and headed into the city much earlier to pick up my ring and finalize arrangements for the proposal.

That evening we had a great time with friends but decided to call it an early night since the scorching heat was really taking a toll on us. The next morning I awoke to Vijay scrambling because he left groceries in the car overnight and was worried they would have spoiled in the heat. I figured that makes sense, Sejal (his sister) was coming back from vacation the next day so he wanted to make sure she had some food at her apartment when she returned (you'll see why this detail is important later). While he headed out to the car, I decided to head back to the nail salon to get a pedicure, since I was rushed the night before and was only able to get a manicure! At that point Vijay was convinced I knew what he was up to. Why else would any sane person get a manicure one day and then go back the very next day for a pedicure?

After returning to the apartment, Vijay let me know that Sejal had called to tell him she had bought us a giftcard for brunch at the Gramercy Park Hotel’s Rooftop Terrace. Knowing that Sejal loves to spoil us I thought, wow that's so nice of her and believed the story because he even showed me the "giftcard", turns out this was just a spare room key from the hotel! Vijay went on to tell me he had called the hotel while I was out and even though they were booked, the manager, Rob would try to squeeze us in.

When we arrived at the hotel, I walked in and thought WOW, this hotel is so nice. We asked to speak to Rob and were informed that they could give us a table around 1:00. At this point it was noon, so Rob suggested we grab a drink or check out the hotel’s private park. Vijay wanted to check out the park so I went along and thought to myself 'he's out of his mind, its 100 degrees outside...'

As some of you may know Gramercy Park Hotel has a private park, which only guests of the hotel can access. It turns out Vijay had met with director the day before and requested we be given access to the park. As we began walking around I started to get very annoyed with Vijay, the heat was unbearable and I couldn’t understand why he wanted to be outdoors so badly! Starangly, he kept insisting that we take a picture, but of course no one was around to take one of us. So, Vijay suggested we set the camera on self-time mode and try taking a picture by placing it on a park bench. We took the picture and Vijay asked me take a quick look at the camera to make sure I liked how the picture turned out. As, I began walking over to the bench Vijay called out my name... I turned around to see what had happened and to my surprise found him on one knee!!! I was shocked, I hadn't expected him to propose yet, so I was speechless! Also, since Vijay was so calm and collected all day, my initial thoughts were is this real? Why would he bring one of his mom's old jewelry boxes and play such a mean prank on me? Even after he opened the box and I could see the ring, I could not believe what was happening. It took me a few minutes of standing in disbelief to fully process that Vijay Shah was finally proposing!! Eventually, I ecstatically responded YES!

The surprises didn't end here... we then headed back to the hotel where I discovered what Vijay had really been up to the day before. There was indeed a brunch planned with beautiful red roses and a delicious meal. Vijay had been working with the staff of the hotel to plan every detail, from our arrival, to the fake scheme of no tables being available, to taking a walk in the park. He also met with the chef to request a special four-course meal. The food was absolutely amazing; unfortunately, I was too excited to eat much of it!

After brunch we headed back to the apartment. I walked in, still shocked and excited, to more roses laid out everywhere (this would be the groceries he claimed he left in the car), champagne and a very sweet card from Vijay! While we were at brunch, Vijay's cousin, Minal had decorated the apartment for us!
Vijay did an exceptional job planning the proposal! One of the best moments of the day was learning that Vijay had contacted my dad who was traveling abroad to ask for his blessing. It seems both of our families had known about the proposal for weeks, but everyone managed to keep it a surprise for me!"

I'll catch ya at the ceremony where Wedding Design and Shilpa Entertainment are setting up for some sensational events!