Good morning, Maharanis! We are heading to the end of this fabulous week, and as always, we are here to give you tons of inspiration by presenting a phenomenal wedding celebration. Today we are pleased to bring you Shruthi & Anuj's wedding festivities. To begin this journey, grab your passport because we are taking you to the paradisiacal lands of Cancun, Mexico, in the company of the best travel concierge: Indian Destination Weddings. So let me take you to The Grand at Moon Palace, the perfect venue chosen by our lovely duo to host their wedding festivities. And not only they hosted this spectacular event, but they also provided the fantastic lighting and the delicious catering and cake that served at the wedding reception. What a great provider! Everything was perfectly trimmed and planned by the talented crew from Dream Shaadi, who created our lovebird's dreamed wedding based on our lovey duo's vision. What talent! Styles By Swati - Salon SBS dolled up Shruthi, our gorgeous Maharani. And we want to point out that she made the right choice by choosing them for her beauty needs. To turn this gala into a tropical party, our friends from DynastyAV jumped into the stage and played their phenomenal beats, making everyone dance the whole night! And we want to give a big shoutout to Regeti's Photography, who snapped photos from every angle to create a phenomenal gallery that we can enjoy today. So, wait no more, and take a look at it. You will love it! 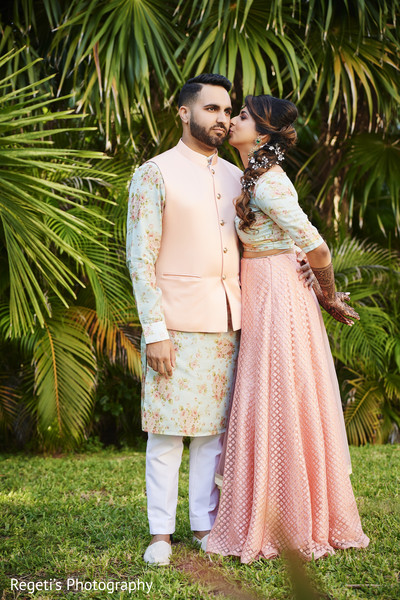 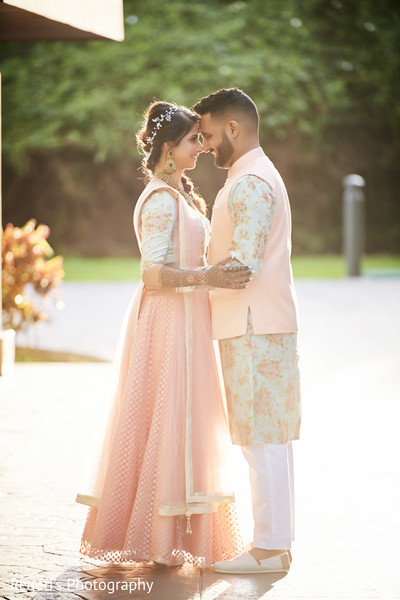 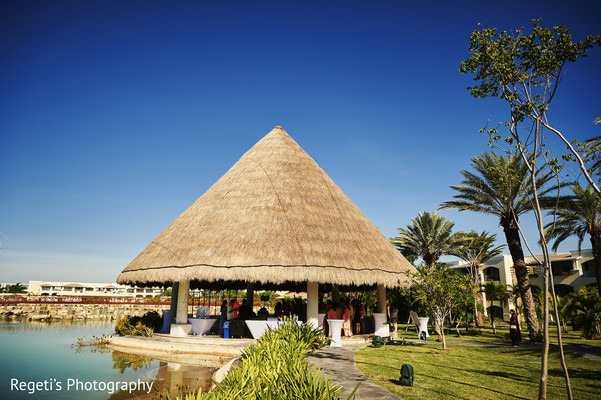 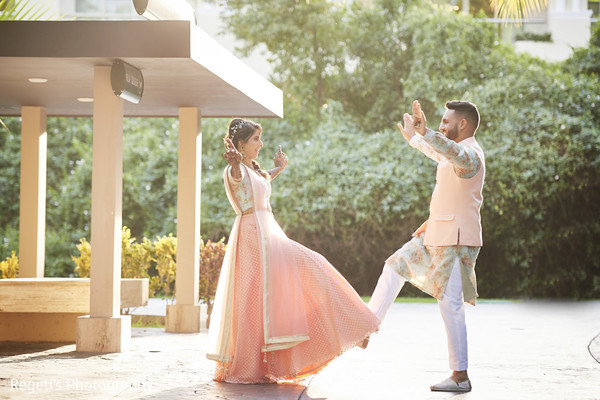 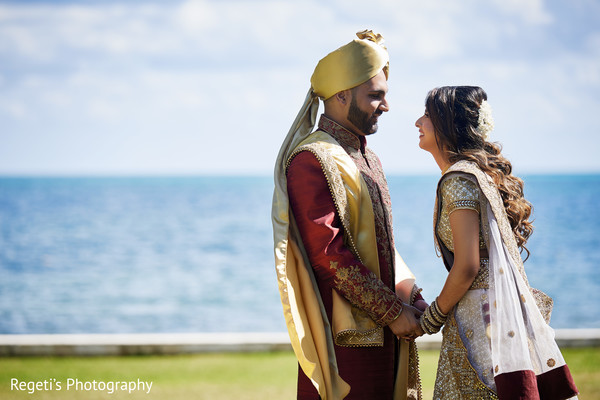 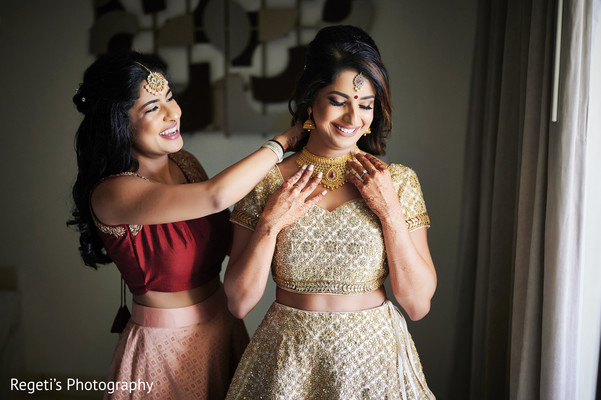 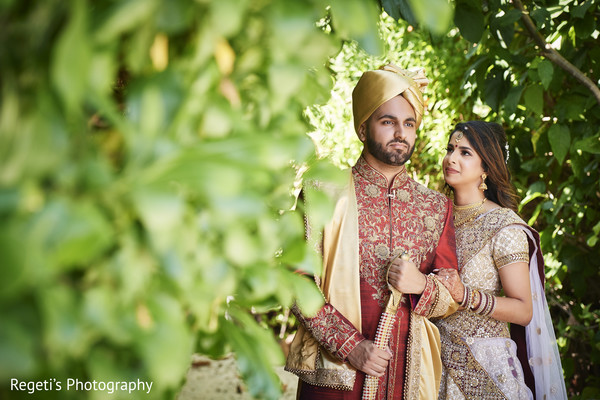 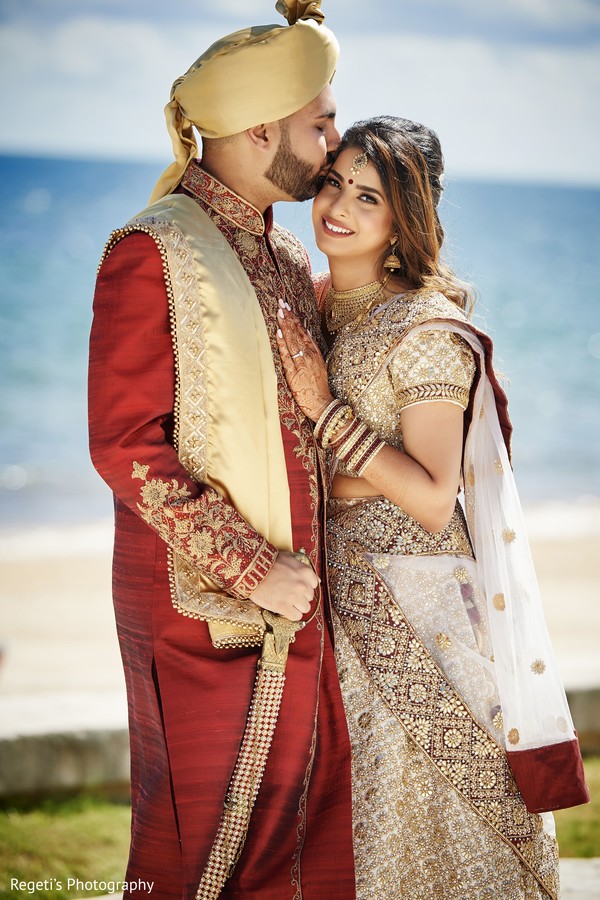 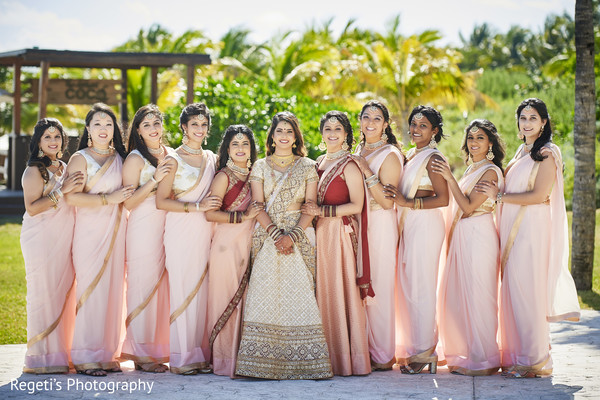 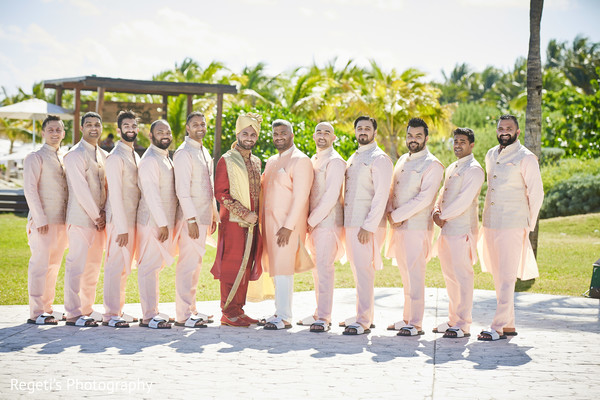 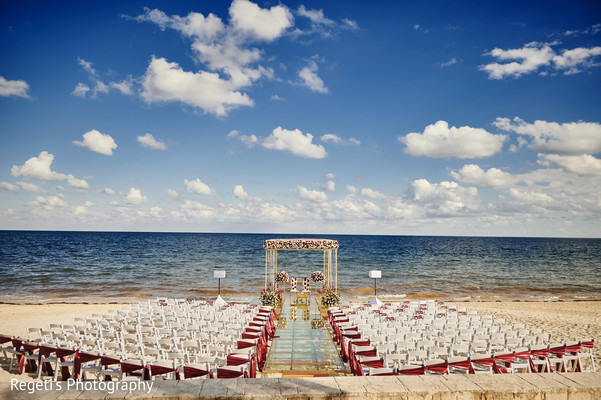 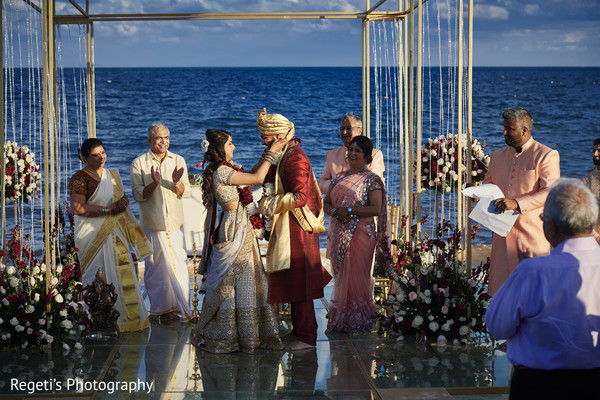 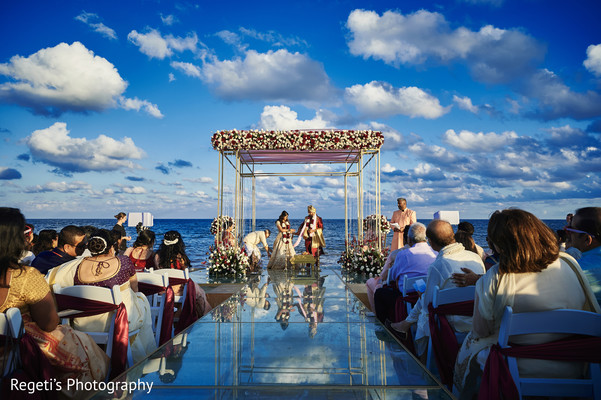 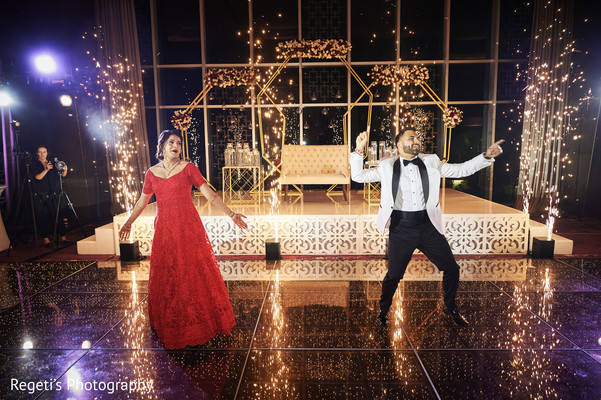 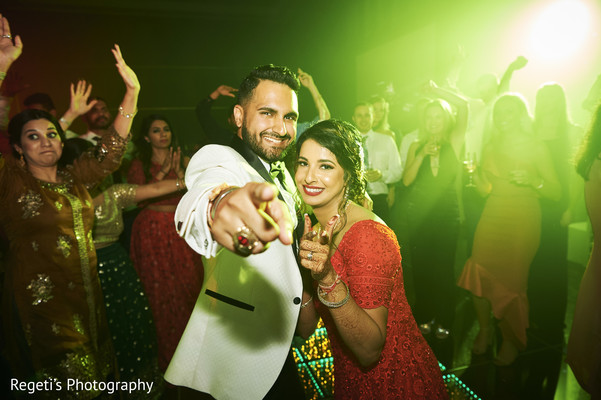 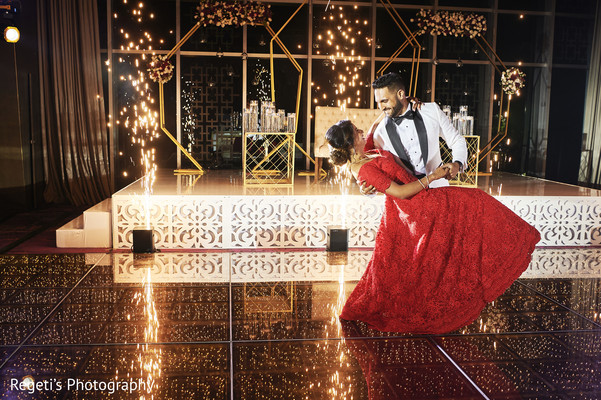 How did you meet your Groom and when did you know he was "the one"?
Anuj and Shruthi met on December 31, 2011 when Anuj's sister, Megha, invited Shruthi to their house for a New Year's Eve Party. Anuj, thinking he was too cool for his sister's friends, said hi to everyone, and went to go hang out with his own friends that night. When he returned later that night, he noticed Shruthi again, and looked at his friend Akhil and said "Dude, I think that girl is cute, what do you think?" After Akhil's encouragement, Anuj got the courage to say hi to her. Her immediate response was "Hey Megha's brother!" Anuj couldn't handle such dejection and walked away, thus ending their first encounter.

Jumping to a few years later (circa Spring 2013), Anuj was now a young working professional while Shruthi was a hard working student at VCU. Finally making a salary, Anuj decided to drive down to Richmond and “make it rain” on a college campus. As anticipated, Megha couldn't wait to see her loving, favorite brother, and decided to throw what was later coined as a "MeghaRager". There, Anuj met Shruthi again, but thought too highly of himself and assumed Shruthi and everyone else would be worshiping the ground he walked on. Shruthi, similar to the first interaction, did not acknowledge his existence. Unlike the previous time, Anuj was having too good of a time to care, and again they again went their separate ways.

Fast-forward to May 2015 when Anuj's cousin, Ayesha, was graduating from VCU. Unbeknownst to Anuj, Shruthi was also graduating at this same time. At this point, Anuj had forgotten about Shruthi and moved on to bigger and better things (or so he convinced himself). Once the post-graduation celebrations began, Anuj met Shruthi’s sister, Laya. Being two of the older people in the group, they passed the time talking about how things have changed in college since they graduated. Once again, Shruthi and Anuj interacted very little, but like a gentleman he offered his jacket to her when she was cold, which she wore all night. Anuj hoped to see her again the next day, but she was gone and Shruthi had simply left the jacket on the railing of the staircase along with his crushed hopes and dreams. A few days later they began texting each other talking about the graduation weekend and Shruthi’s post-graduation plans. Shruthi thought it was just an innocent conversation... after all he was just Megha’s older brother at the time. As the conversation continued and progressed, she found it very easy to talk to him and found herself laughing at all of his jokes. Then, she suddenly started to get the feeling that there may be a spark between the two of them.

Our next time hop will only be a few weeks later to end the of May when Shruthi and Anuj (now both interested in each other but too afraid to say it directly) met at a mutual friend, Sunna’s, graduation party. Luckily for Anuj, this party was in Anuj's 2nd home, Diya Restaurant. (contact Rahul & Ajay Arora for all your catering needs) With the confidence of familiar terrain, Anuj wasn't nearly as nervous as Shruthi. They awkwardly said hi while also doing their best to avoid each other; as the night progressed, they knew they couldn't keep ignoring each other and finally gathered the courage to say something. Anuj, mustering up the confidence to make the first move (obviously with his mouth full of butter chicken), used his Diya connections to impress Shruthi with a plate of her favorite dessert, gulab jamun, adding casually that he liked her. Shruthi was taken aback at first, but eventually told Anuj that she liked him as well. A few weeks later, Anuj decided to make it official by surprising Shruthi with a glass Coke bottle (her favorite) that was personalized to say, “Be my girlfriend?” Shruthi, now having been swept her off her feet twice, excitingly said "Yes!" and so it began...

Since then, their relationship has gone through a lot of tests. Those challenges eventually grew as distance started to play a significant role with Shruthi moving from Virginia to New York City, back to Virginia, then Pittsburgh, and finally settling in Philadelphia. Let’s not forget Anuj’s equal sacrifice of going from DC to Tysons Corner.  But as true of the connection between and Anuj and Shruthi a few (hundred) miles haven’t gotten in the way of this blossoming love. They've stood by each other every day, successfully facing whatever life has thrown at them, and can't wait to embark on their next chapter together as husband and wife!

Share the scoop on your Proposal Story!
After receiving all the blessings and well wishes from his and Shruthi's families, Anuj couldn't wait to put his proposal plan into action. He had booked an Escape Room outing in DC for the two of them (where the final clue was going to be the proposal) and was planning a post proposal party with their close family and friends afterwards to celebrate.

Shruthi one day non-nonchalantly mentioned that her company was sending her to Bologna, Italy for a week-long conference and how she was going to spend an extra day in Venice before coming back. Immediately an idea started to form... what if Anuj proposed in Venice instead? The Bagai house went in full lockdown mode as there were only 2 weeks to plan a proposal (not to mention, Anuj was in NYC for a week for work). The flight was booked, Shruthi's parents and siblings were on board, and the wheels started to turn. Due to the time difference, Anuj and his older brother, Sumeet, were talking to companies in Venice in the early morning hours to see how to pull off a proposal Shruthi would surely never forget.

Shruthi did not make it any easier on Anuj. He had to tell her he was going out for the night and his phone was going to die so he could go on a 14 hour flight undetected. The night before the proposal she kept FaceTiming him to see his face (who can blame her there?), but he had to keep ignoring her calls since he was already in the streets of Venice by then. He even had his colleague/acquaintance/friend Vishal send him a picture from work that Anuj then sent to her to convince her that they were still in the office working late.

As the morning of the proposal approached Anuj was anxiously awaiting Shruthi's arrival to the surprise proposal point. Due to the time difference, he was unable to find out if had she made it to Venice since it was only 4 AM EST and he couldn’t text her without tipping her off. Anuj was so stressed that he checked out of his hotel room 3 hours early and stayed on the same corner of the same street in fear of running into her in Venice. All his hard efforts paid off when finally...
https://vimeo.com/318815801/7c435289d1

Tell us how you went about planning your wedding, and your overall experience with the Venues, Hair & Makeup, Outfits, Decor Theme, and all of the other important details.
Our planning process was made a lot smoother due to the success of our wedding planning who is also our older brother. We are so thankful for all of his support and would not have been able to pull off our dream wedding without Dream Shaadi.

How did you select your bridal lengha or wedding dress? Did you have a favorite color in mind?
As a Malayali bride I always knew I wanted to wear a Kerala cream colored outfit, but as a fusion destination wedding I wanted to combine our north Indian and south Indian cultures. I wore a custom made ivory and maroon silk gotapatti lehenga made by Nazranaa. I absolutely loved it!

What did your guests particularly love about your Wedding?
Our guest loved the fireworks we had at our post wedding event.

Was there a really special moment in your wedding that constantly replays in your mind?
I most memorable parts of our wedding that keep replaying in my mind are obviously walking down the aisle at the wedding ceremony as well as seeing our guests reaction when the fireworks went off. It was a surprise to all of our guests including our immediate family.

For events other than your ceremony, please tell us as much as you would like about the decor, style, dances, and all the special details.
We tried to keep a reoccurring color scheme at each event and really took advantage of all the outdoor spaces available at the Grand at Moon Palace Resort to give our guests the ultimate destination wedding experience. The Post-wedding dinner party after our wedding ceremony is still the most talked about/memorable event for us and many of our guests.

Do you have any words of wisdom for Brides-To-Be?
Marry a man that makes you laugh and is willing to do anything to make you happy. The rest will all fall into place. Keep reminding yourself this even in the most stressful moments.

Anything else you want to tell us? We'd love to hear all about your other details! (jewelry, mehndi, venue, cake, bouquets, etc.)
We loved all our vendors and could not have pulled off our dream wedding without them. We're also thankful for all our family and friends that helped throughout the process.

If we inspired you today, make sure to join us tomorrow for more!