Ladies, take a sneak peek into the sophisticated union of Rima and Akshar! This lovely couple looked nothing less but incredibly beautiful on their wedding day. The stunning Rima dolled up by Arfana Jasar and decked in her exquisite floral lehenga and kundan jewelry, got a majestic Maharani feel that matched Akshar’s dapper look as Raja. This good-looking pair pulled together an awesome celebration at the premier Sheraton Mahwah with the expert assistance of Pearls Event and Co. The celebrated planning firm meticulously planned and executed a beautiful affair, taking care of every detail behind closed doors. The gorgeous décor that created the warm atmosphere was in charge of the Abhishek Decorators’s team who built a round mandap that was an absolute sensory delight where Rima and Akshar tied the knot in a traditional Indian ceremony. Sharad Patel’s images narrate the big day, from the priceless Akshar's first look reaction to the intricate rituals. So beautiful! Peruse through the unique imagery in our complete gallery! 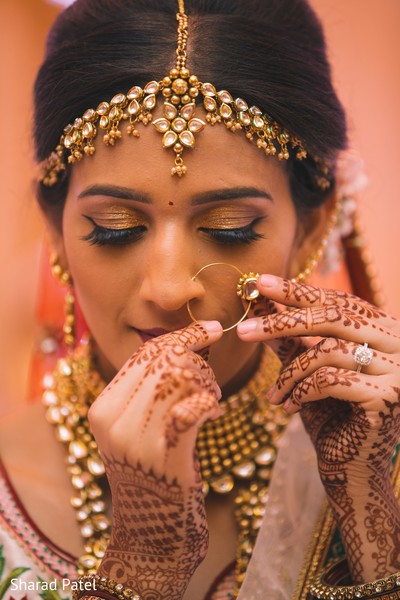 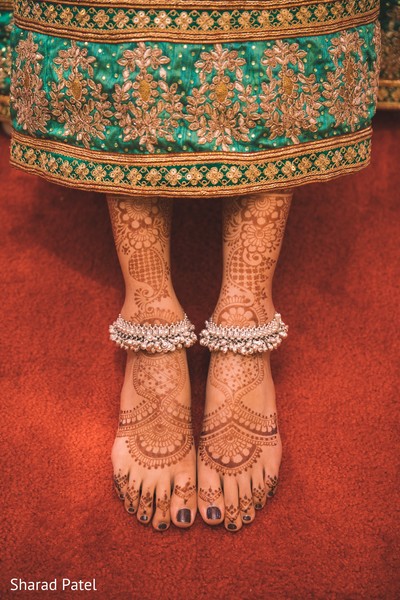 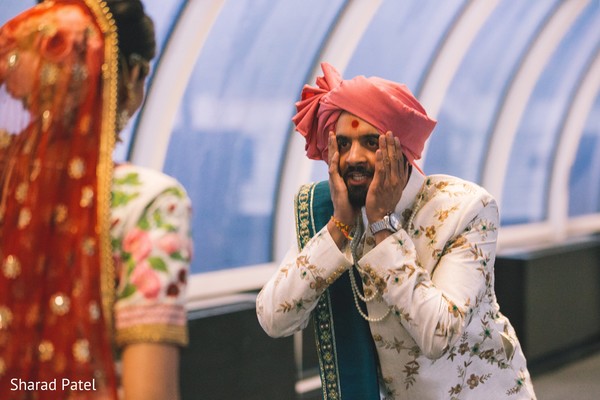 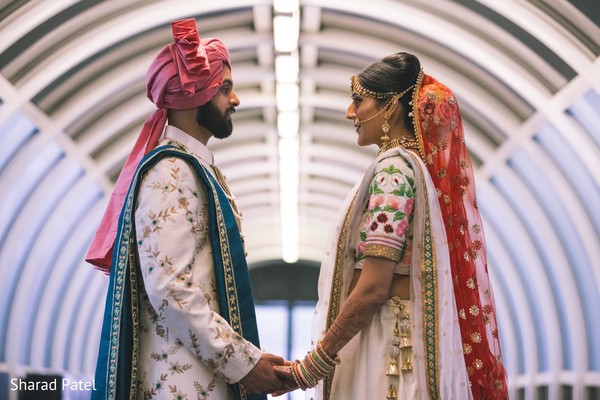 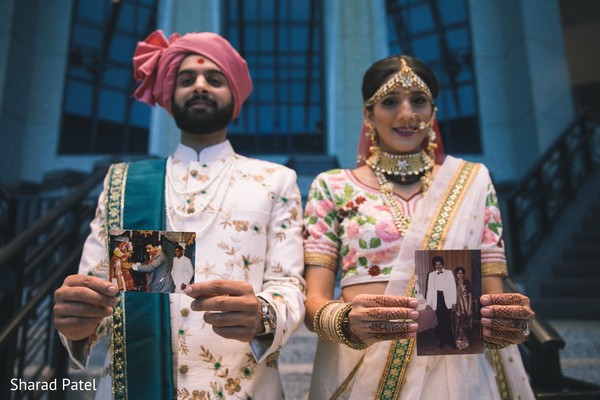 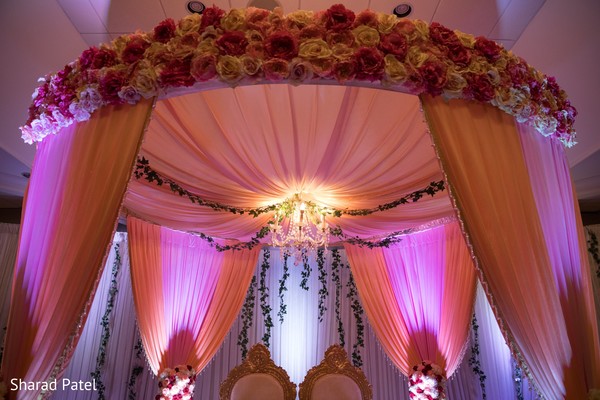 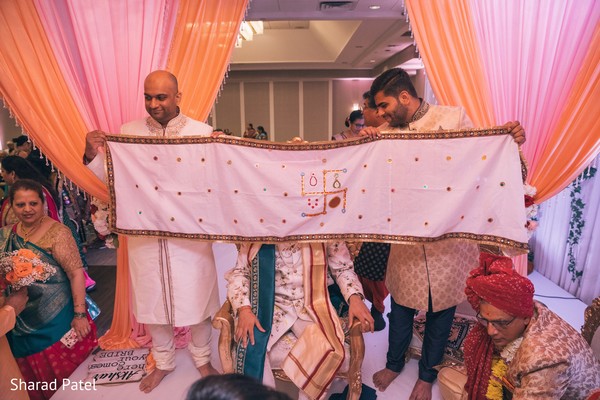 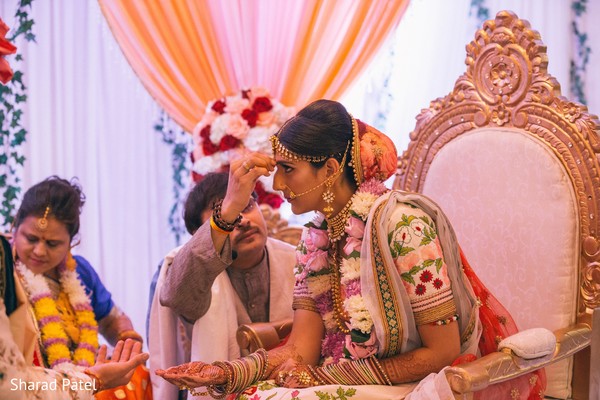 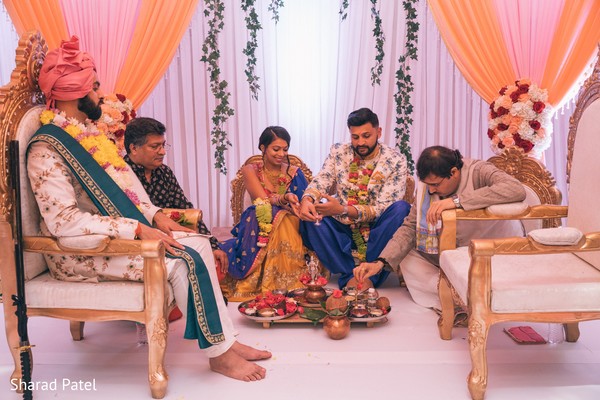 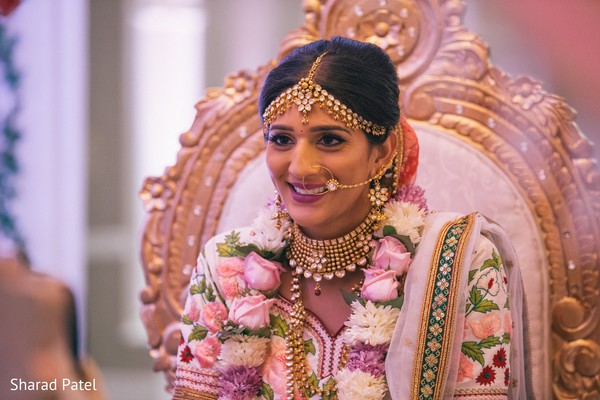 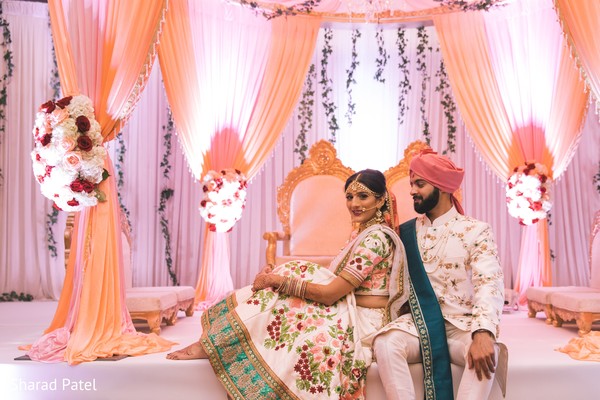 How did you meet your Groom and when did you know he was "the one"?
It began back on December 22, 2011, in New Delhi, India at the Swaminarayan Akshardham Complex. Akshar had just landed the previous night, while Rima had been giving tours at Akshardham for a little over one week. While Rima was knowledgeable and enthusiastic as a guide, Akshar spoke less than 10 words in his almost unconscious state due to jet lag. After the brilliantly executed tour, they both went their separate ways not knowing their paths would cross once again.
Fast forward to July 2013, a few days after the BAPS North American Youth Convention in Atlanta, Georgia. Akshar, more active on Instagram in the days of yesterday, received a notification that simply read: "Riima Patel (@qtrima4u) followed you." His immediate thoughts: why does this adult woman's username start with a "qt"? Akshar didn't think anything of it and proceeded with his life PR (Pre-Rima). After a few silent and uneventful days, Rima struck once again - this time by following him on Twitter. And while he did think she was becoming very creepy, he recognized her face a little more clearly in her profile picture. Akshar messaged her about the tour in New Delhi, and they hit it off almost immediately.
After a year of back and forth, they definitely and mutually decided to start dating while being long-distance. Rima felt nothing but heart-melting joy during this moment. After all, he had courted her for a whole year! Over the next two years, they experienced a relationship that proved to be fate. They traveled together, Akshar talked into the early mornings while Rima listened, they single-handedly generated Apple's revenue from its revolutionary FaceTime feature, and of course, bonded over their shared love of cheese and cheese-smothered foods.
In 2016, Akshar was lucky enough to receive a job offer that took him to New York. They were finally within the same tri-state area! That led to many many dates & hangouts, they fell deeper and deeper in love every day.
How did you select your bridal lengha or wedding dress? Did you have a favorite color in mind?
I wanted to do the Sabyasachi floral design so when I went to India I found my own designer in Baroda & got the exact dress made!
What was the most enjoyable part of the planning process, and why?
The little details such as program fans, popcorn on the seat, a homemade welcome sign, & more.
What did your guests particularly love about your Wedding?
The venue, Sheraton Mahwah is filled with mountains outdoors.
Was there a really special moment in your wedding that constantly replays in your mind?
The first look.

Rima and Akshar’s ceremony ended up with the most beautiful reception! Get ready to discover all the splendor in our next post.