There’s something about the navy and gold color combo that pops beautifully in photos! Palav and Jigar’s reception at Sheraton Mahwah resembled van Gogh’s ‘The Starry Night’ portrait, with beautiful twinkling lights, rich cerulean hues, and starry embellishments. Their ombre blue cake could have been mistaken as a work of art! It was covered in fondant star designs and topped with an adorable “Love you to the moon and back” quote. Palav made a graceful reception entrance in a stunning white gown, with head to toe floral appliques. Her dress swirled beautifully during the couple’s first dance, and we were thrilled to note her bright red heels! Such a pretty touch. And we have to mention the gorgeous white dance floor by M4U Events, which was outfitted with hundreds of twinkling lights perfect for their starry theme! The stars that shone most brightly were Palav and Jigar of course, who both glowed with happiness! We are obsessed with Palav’s smoky eye, polished red lip, and bouffant updo courtesy of Heena Das Beauty and mehndi by Mehndikalogie. Maharaja Jigar looked very handsome as well in his snazzy red tux! The planning and design by Elite Events Management and the floral and decor by Sajawat was impeccable, and chock full of so many inspirational details for all you brides-to-be! As the lights dimmed, delicious food by Moghul was served, followed by guests getting down on the dance floor to all the latest Bollywood jams by DJ Gaurav. You can peruse the full gallery by DP Studios below! And make sure to read up on all the behind the scene deets from Palav herself! 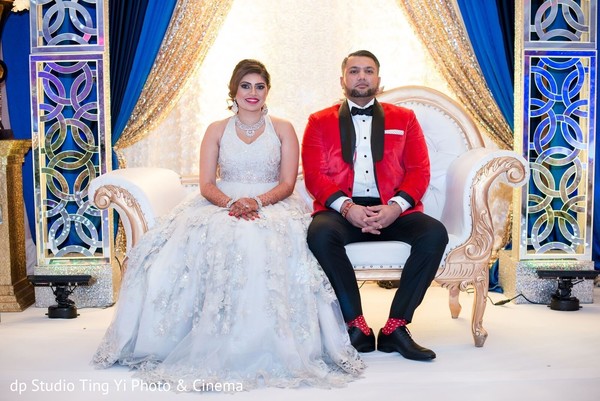 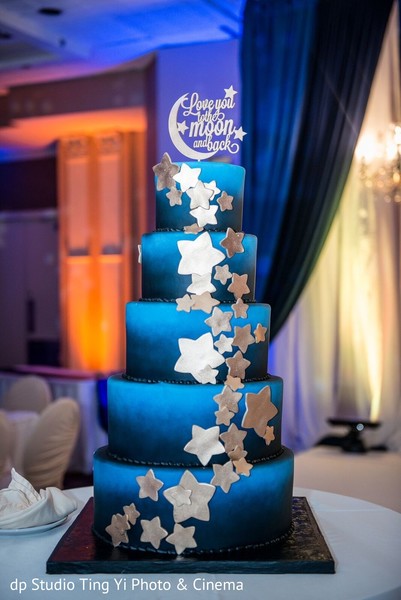 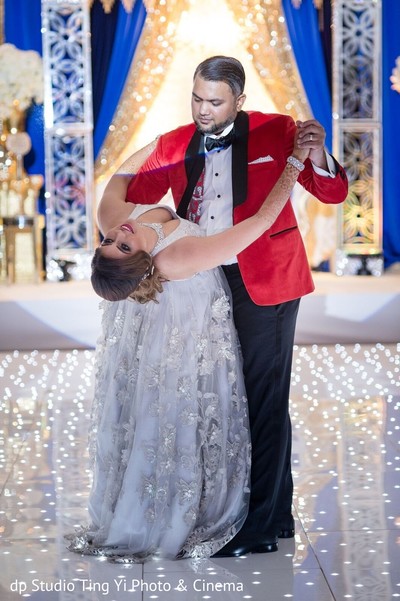 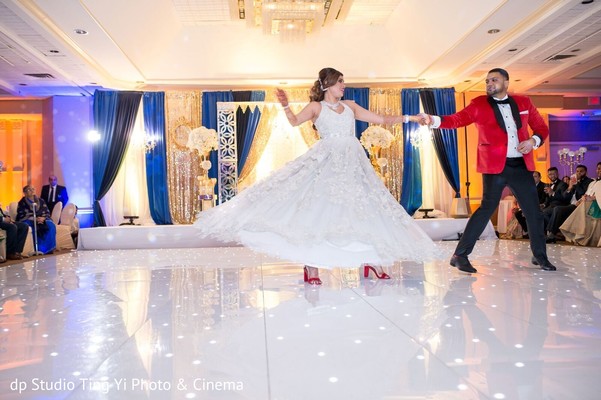 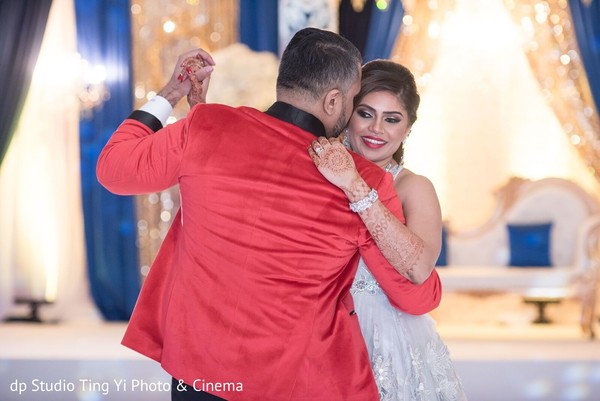 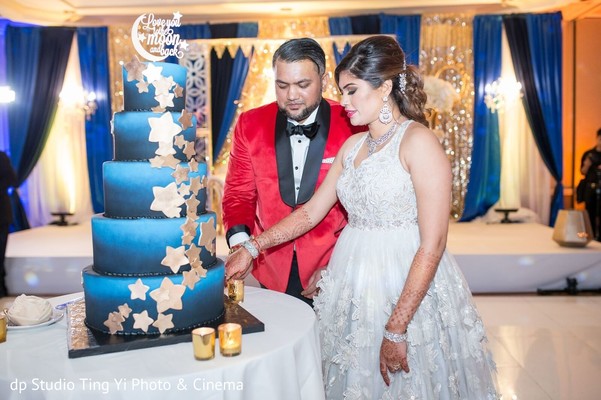 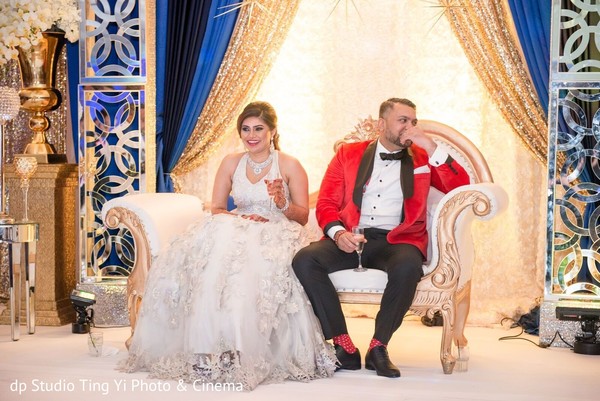 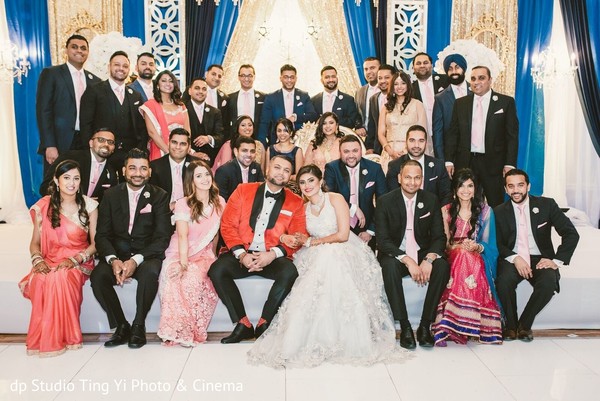 How did you meet your Groom and when did you know he was "the one?”

I met Jigar at Hotoke in New Brunswick. I was out with some friend and he was out with his. A mutual friend had the intention of introducing me to someone else, but Jigar happened to be in the right place at the right time.

How did I know he was "the one?” It was about a year after we met. We were out for a friend's birthday...one of those NYC party cruises. As the night went on I realized there were a lot of people from my past on the boat, when I mentioned it to Jigar, there was absolutely no judgement, he found it more funny than anything else. And that was that.

Clue 1: Around August/September of 2014 my best friend, Aesha, told to me about a "work event" she had coming up at the Philadelphia Art Museum and asked if I wanted to come along. I was a little skeptical about this...she doesn't like her job that much to be that excited about this event.

The night before this "event" we were all planning to go out to celebrate a different friend’s engagement. I remember being mad at Jigar because he had gone to Edison (his parents' house) to get something, and then decided to do a quick happy hour at Chili’s with his friends. Obviously it wasn't quick, because he was late in coming home to go to the city. Anyways, we went out had a good time and came home. Aesha had stayed the night at our apartment.

Clue 2: So now it was Saturday morning and we had to be in Philly by 5 for her "work event" I decided to drive down to PA early so I could see my parents (it was Diwali that weekend). As I was driving I get a call from Jigar...BUTT DIAL! I heard Aesha's voice in the background and immediately hung up....

Clue 3: I got home to see my parents and they were getting ready to go to the mandir for Diwali. I was a little surprised that they weren't mad about me not coming with them but instead going to a "party" in Philly. Very out of character for my parents.

Curveball: I get to the art museum and walk in through the entrance. The security guard then gives me a badge that had Aesha's company name in it...I was attending her work event after all. So now I was really thrown off. Maybe he wasn't proposing after all. I make my way to the exhibit to where this event was being held...

Go time: There was Jigar standing in the middle of the Indian art exhibit with candles and flowers all around. He got down on one knee and popped the question!

After party: Afterwards we went back to my parents' house where he told me that the reason he was late the night before wasn't because he was at Chili’s but because he had driving all the way to Warminster to ask my dad for my hand in marriage.

Then he told me that we were going back up to NYC to celebrate with our friend and he had something reserved for 11pm. On the way he says that it looks like might get there early, so let's stop at Hotoke (where we met) for a quick drink. We walked in and there are all of our friends and family surprising us...me.

Tell us how you went about planning your wedding, and your overall experience with the Venues, Hair & Makeup, Outfits, Decor Theme, and all of the other important details.

Even before we were engaged there were a lot of things that I knew I wanted. We started with the three most important things...Venue, food, DJ. After that we moved on to the smaller details. I, being a graphic designer, had a very specific look I wanted for everything. I knew wellll in advance that I wanted out theme to be "starry night" but not cliche looking with actually stars and moons all over the place. Sachi (Partyland) understood my vision to a tee. I also knew exactly the style of dresses I wanted, so when we went to India, getting them custom made was the best option.

I knew I wanted a completely red lengha with a gold dupatta on my head. Everything we saw in the stores was either wayyy too glittery/sequinsy or multi colored. I wanted something that was classic and timeless and not trendy. I was getting a little disheartened when I couldn't find something I loved. We finally went to a store and found something I really liked...I didn't love it, but I did really like it. So we bought it. I showed it to my friend and the response wasn't what I'd hoped. My mom’s best friend in India has a daughter who is a designer and was like “I can custom make all of your dresses!” So we scrambled to see if the store would let me return my dress...and they did! So I ended up getting all of my outfits customs made by my moms friends daughter and they were PERFECT!

What was the most enjoyable part of the planning process, and why?

I had the most fun picking out the small decorative details. I know it's stuff that most people wouldn't notice, but they were things that I really wanted. And in the end, they were things that the guests really appreciated. For example, to go along with the guest welcome bags I designed a small business card sized itinerary, which was helpful to those who didn't have the invitation on hand.

What did your guests particularly love about your Wedding?

Everyone loved the speeches during our reception. We had 7 in total, which seems like a lot. But they were all so sweet as well as entertaining that it didn't seem as if they were taking up too much time. We also got a lot of praise for the food at our reception which was from Moghul.

My personal favorite part was the pheras. My mom had gotten A LOT of flower petals. So as we walked around the fire it was a shower of petals.

Vidhi/Pithi: this was a small event at my parents house, with only close friends and family. It was a perfect way to keep the day relaxed and really personal.

Mehndi: we had a minor hiccup with this one, it was originally supposed to be at my parents’ house in the back yard, but with the unpredictable weather we decided to move it to a close by hall at the last minute. Dhara/Mehndikalokie was absolutely amazing. She was really sweet and accommodating.

Garba: I was so on edge for my Garba...nerves for the wedding the next day, I guess. This event was a traditional Garba. Live Garba music was provided by Ujjval Vyas and company. They did a great mix of the traditional Garba and raas songs as well as a few more contemporary songs. My Garba lengha was one of my favorites. It was so much fun to dance in. We had a total of 3 performances. The first was a dance performed by our family and friends. With a surprise appearance by my parents. Then, Jigar's cousin sang a lovely ghazal. Finally I, along with some friends, did another dance performance. The night was a lot of fun.

Do you have any words of wisdom for Brides-To-Be?

Don't stress too much. Be in the moment.... Everyone says this, and it always so hard to listen to and remember.

You've done months and months of planning so obviously you want things to go according to plan, but chances are something will go wrong...there's probably not much you can do in the moment. So there is no point in being upset about it.  Just enjoy the time with all your loved ones.

Anything else you want to tell us? We'd love to hear all about your other details! (jewelry, mehndi, venue, cake, bouquets, etc.)

Back to the hiccups of wedding planning. We had a major bump 3 days before our original wedding date (Sept 10, 2016) when Jigar ended up in the ICU with multiple pulmonary embolisms. It was definitely scary. I was getting my nails done the day before all the festivities were to kick off and I get a call from Jigar telling me that he's going to the ER (he's a doctor so he knew that something was up when his shortness of breath wasn't giving up...it definitely wasn’t anxiety). It was the next morning, the morning of what was supposed to be our Mehndi night, that we made the decision to postpone the wedding. His doctors told us that  he would have to be in the ICU until at least that following Monday. Jigar could have left against medical advice...he was worried that all my hard work of planning would go to waste, and I was worried that he wouldn't be able to enjoy the wedding, after all it was his day as well. For me the decision wasn't too hard. I didn't want a wedding where everyone was worried, so no one would be having fun.

Both of us are soo grateful for all the support we got from our friends and family...even our vendors. They were all so accommodating to our situation.

Same place, same time tomorrow Maharanis! Can’t wait to share another gorg wedding with you all!