Just like Kriti and Amit’s personalities, their love story is sweet, unique, and hilarious! On their first date, Amit was a bit late since he was listening to the Oakland A’s playing on his car radio. Weeks later, immediately after Amit asked Kriti to be his girlfriend on the Golden Gate Bridge, she realized she had forgotten her wallet in their Uber ride, and the two raced through San Francisco to track the car down! Many more misadventures and adorable stories later, Amit whisked Kriti away to Las Vegas. During an impeccably planned dinner at the Eiffel Tower Restaurant, the waiter brought out a dessert tray complete with a Eiffel Tower ring box, and Amit proposed to Kriti as the Bellagio Fountains were in full swing! Too cute! You can read more romantic details about their love story and proposal below in our interview with Maharani Kriti. The twosome had a wedding celebration bursting with color and creative details over the Christmas holidays, with planning by Ambiance by Tejel. It began with a joyous sangeet at Mayuri Restaurant decorated with a lavish Rajput theme by R&R Event Rentals. This was followed by Kriti and Amit’s ceremony, which took place at the Fairmont San Jose. The hotel was lit up with Christmas lights, which made for such a festive baraat and ceremony! As a cute touch, they included a mistletoe bouquet at their ceremony entrance, which meant that the bridal party had to blow kisses at each other before they made their way down the aisle! The decor was done by Fine Linen Creations and De Young Flowers, and the couple was sure to book Wedding Documentary Photo + Cinema to photograph and film their wedding. The resulting captures couldn’t be more beautiful! Take a peek at all the festive photos in the full gallery. The fun has only just begun, and we’ll be giving you the inside scoop on their Winter Wonderland reception in a bit! 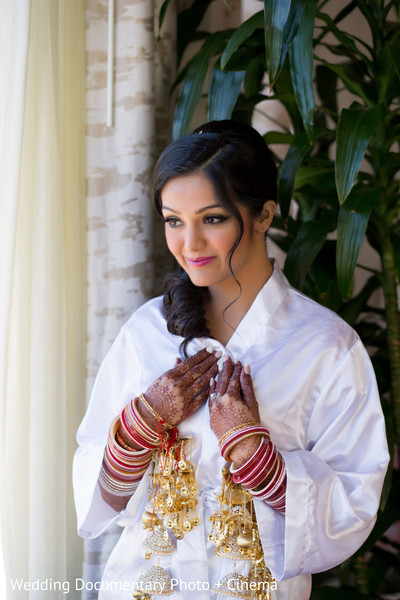 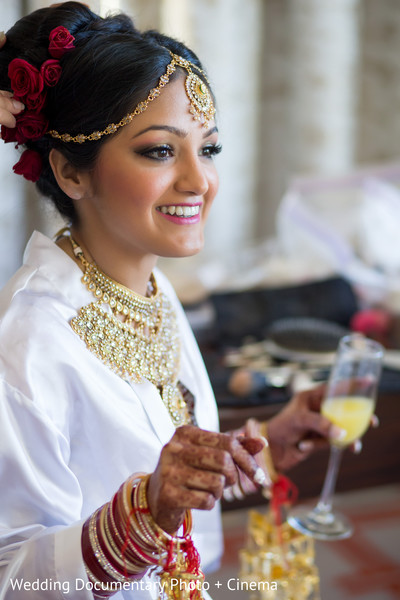 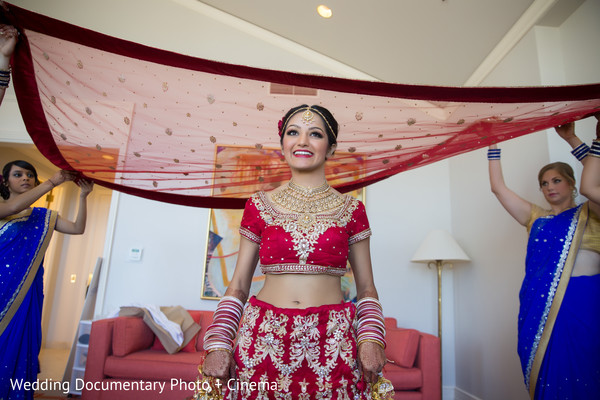 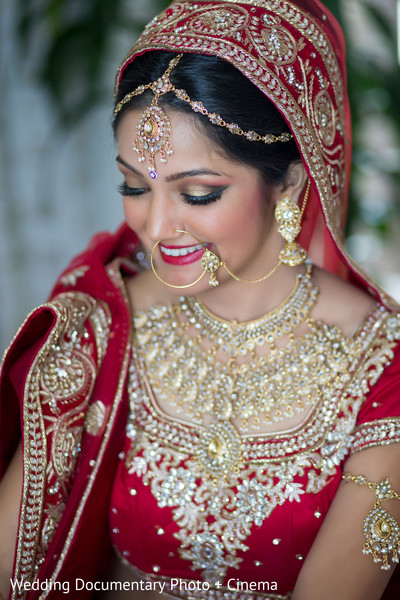 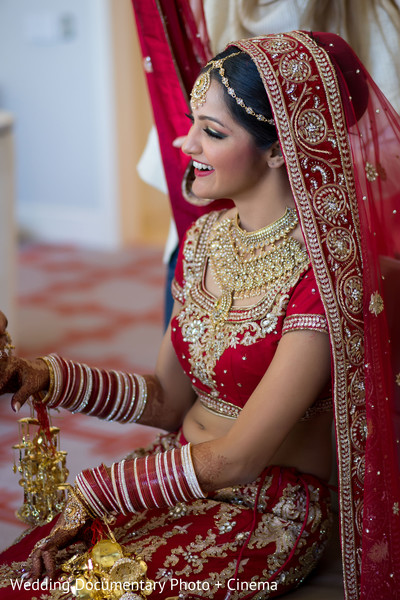 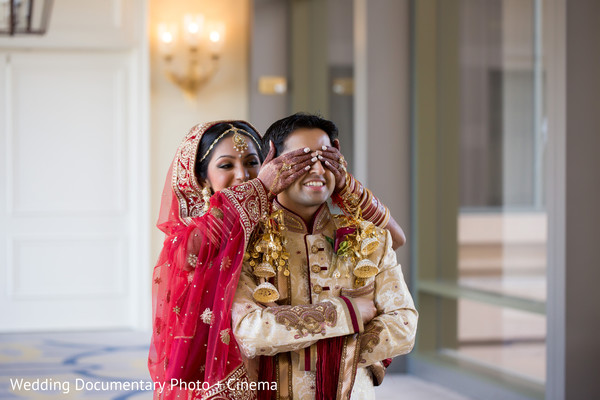 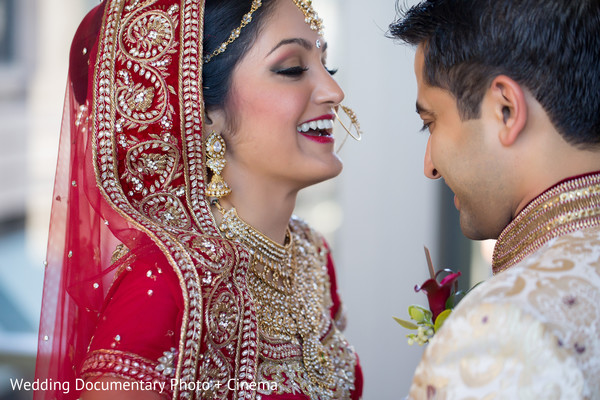 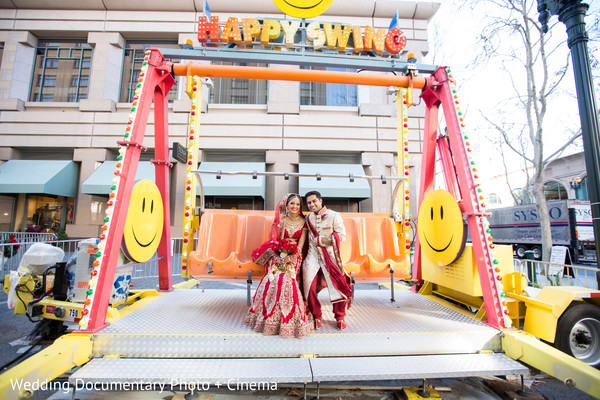 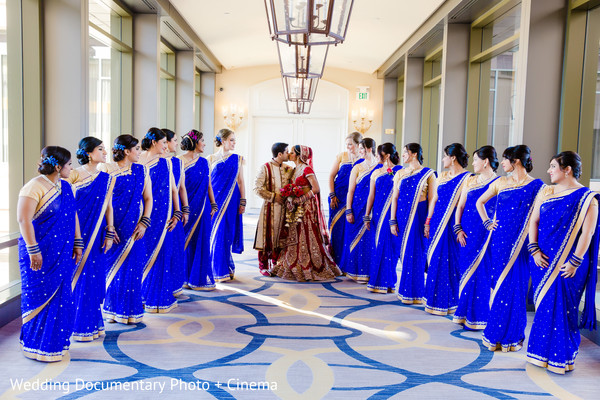 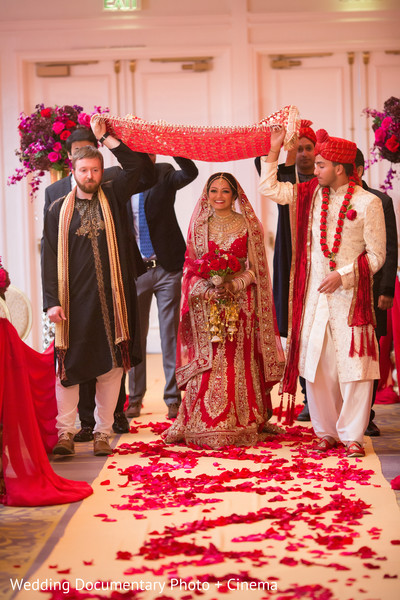 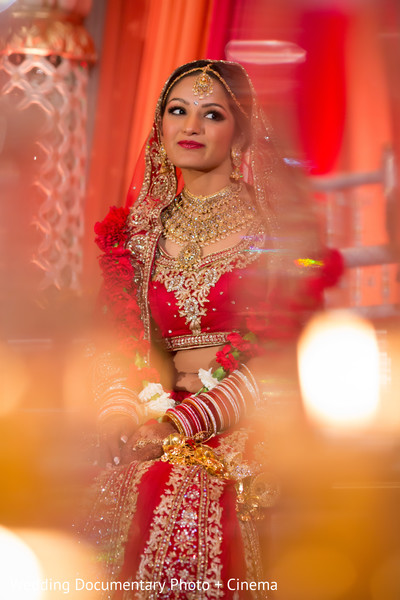 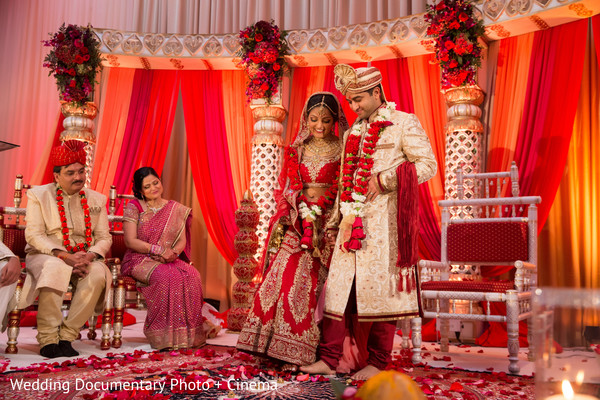 How did you meet your Raja and when did you know he was "the one"?

Amit and I knew it was love at first swipe when we both swiped right on Tinder that day. We had both just downloaded the application too! Can't get luckier than that. After he messaged me first, the conversation started awkwardly flowing since neither of us were very good at this online dating thing and I was terrified when I found out he was a doctor that maybe he knew my mom... turns out he did. He actually interned with her best friend at Kaiser Santa Clara. That was awkward. But he seemed nice and I was hungry and wanted a free meal so I agreed when he invited me to dinner on August 2nd. We met up at the Vintage Wine Bar first where I told him I was running late and showed up 2 minutes later with him nowhere to be seen because he was listening to the A's game in his car (such a romantic). He showed up, we awkwardly hugged and sat down, and in all my nervousness since it was my first online dating experience, I asked him "so why are you single?" It couldn't have been a more hilariously awkward first date, especially when he took me to the one place in Santana Row I dislike with a passion - Pizza Antica. How do you eat pizza on a date gracefully? It's just not possible. I was so nervous I remember nothing about any of the conversation except that he talked about the 49ers for a while and was impressed by my very minimal knowledge of them.

After that first date, we met up for some casual dates after that where I was convinced he didn't have feelings for me and just wanted a friend. He even tried cooking for me (which included making ranch dressing from scratch which did not work) and ended up with me cooking the pasta for him. I didn't burn it! It took him forcing me to watch 3 scary movies (which I hate) to finally realize that I liked him and make a move. A month later he asked me to be his girlfriend in San Francisco on the Golden Gate Bridge - to which I said yes and then proceeded to realize I had left my wallet in the Uber and we went on a romantic expedition of find Kriti's wallet somewhere in SF. I think that's when he knew he loved me. I was still figuring it out hehe!

Do you have a super romantic proposal story or engagement memory?

It started with a Christmas Present from Amit - Taylor Swift Concert tickets with a coded note on the back that said:

Merry Christmas. Pack your bags. We are flying to ? on Saturday December 27th.

Saturday morning came around and we began our travels. I was so annoyed when the plane was stopped in LA, but that was just the layover! I was super stoked when Amit finally told me we were going to VEGAS! Amit surprised me again by taking me to the Paris Hotel - which I had never stayed in before! We had a gorgeous view from our hotel room at night! We spent the day wandering around the strip, eating dim sum in the hotel, and grabbing drinks at the Cosmopolitan. I still had no idea that he was going to propose because he convinced me that he would do it in January.

Amit told me to dress in a blue dress and kept asking me to fix my makeup and jewelry (super offensive haha) - that set off alarm bells for me because he's typically very unhelpful with the girly stuff. But I was still convinced he would do it in January and just thought he'd been watching too much Bachelor. Plus he's normally pretty romantic like this (I bagged a good one)!

He took me to the Eiffel Tower Restaurant and even though they had a personalized menu, beautiful roses set up on the table, and a gorgeous view of the Bellagio fountains, I still had no clue! They brought out a special dessert plate with the ring in an Eiffel Tower ring box surrounded by rose petals and 'Will You Marry Me' written in chocolate! I started crying because there was no food on the plate and I didn't stop through the entire proposal. Amit apparently did not hear me say yes when he asked me the question, but he put the ring on me anyway. It was incredibly romantic and he timed it just so the fountains would be going off in the background! Couldn't have asked for a better proposal.

And then we lived Happily Ever After as Mr. & Mrs. Saxena... Lol no, we did not elope in Vegas despite my repeated requests to do so. Amit even gave me another surprise with his parents and sister there to congratulate us at lunch in Vegas! That was really sweet and fun!

So romantic! We have Kriti & Amit's winter wonderland reception deets coming right up!