Today’s love tale unfolds from the lens of Wisner Photo celebrating Maharani Pearl and her beau Ben. We just loved all the charming details of this bride’s wedding at the Lover's Lane United Methodist Church! Pearl is a planner on her own and soaked each loving moment she got to spend with family and friends as they organized a lot of wedding duties themselves. What bride doesn’t love dress shopping? For Pearl, the decision between a sari or a dress for her ceremony was a tough one. However, once our Maharani laid her eyes on a chic and modern sheath wedding dress with corded lace and wispy organza flowers, she was head over heels. It was the perfect dress for her union with Ben and she looked absolutely striking. Vanita Patel further festooned this natural bride with a subtle glow with a side swept ponytail that was just darling. As the guest list topped over 750 family and friends, a lot more coordination wes required. Nancy Joseph helmed the important task of ensuring that the event was a streamlined as possible. The bride and groom wed in a beautiful church boasting archaic designs and symmetry. The wedding ended with an intimate session with Wisner Photo who captured all the shots you see on this feature. This romantic love story unravels with Pearl gushing about her beau down below! Take a gander into the gallery where the love just pops off the screen. 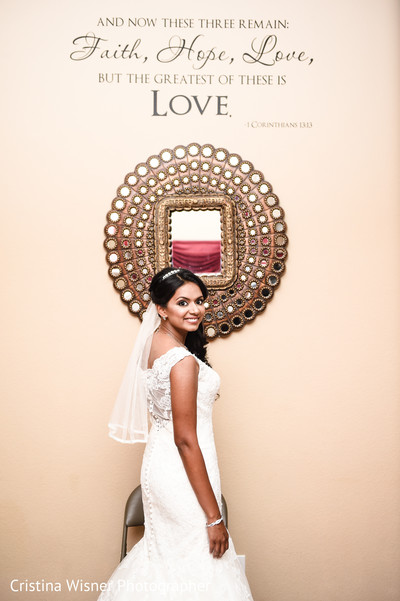 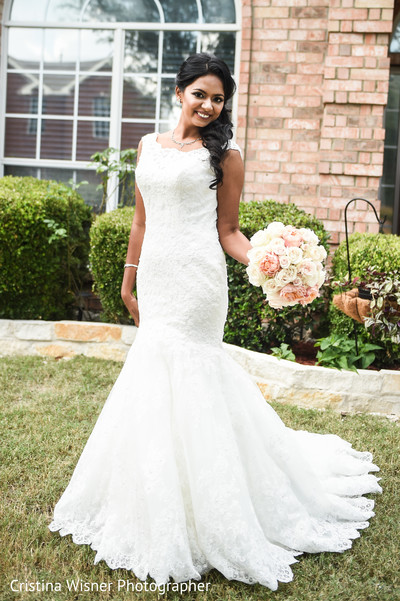 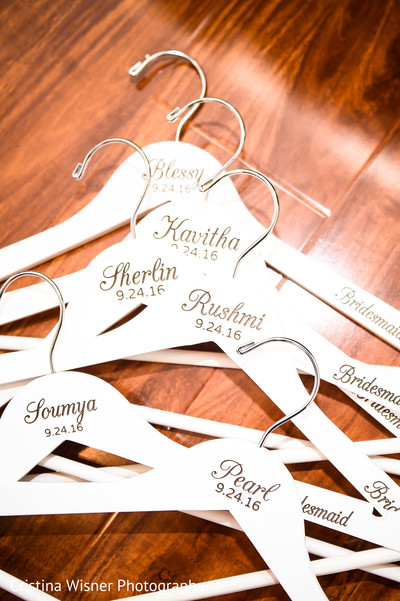 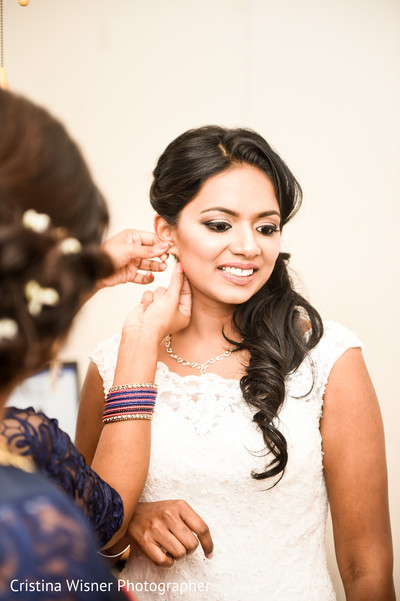 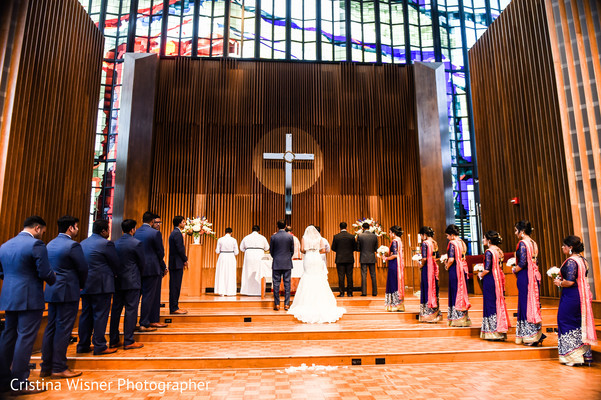 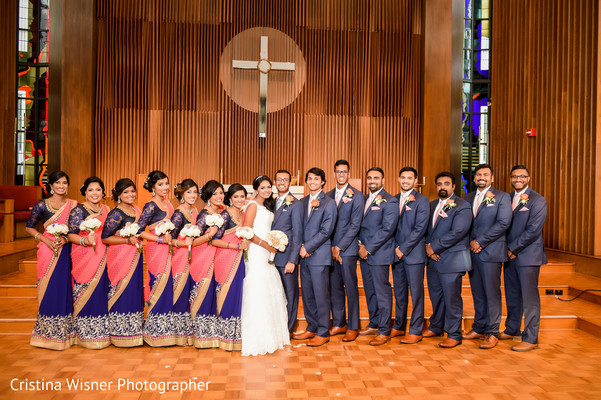 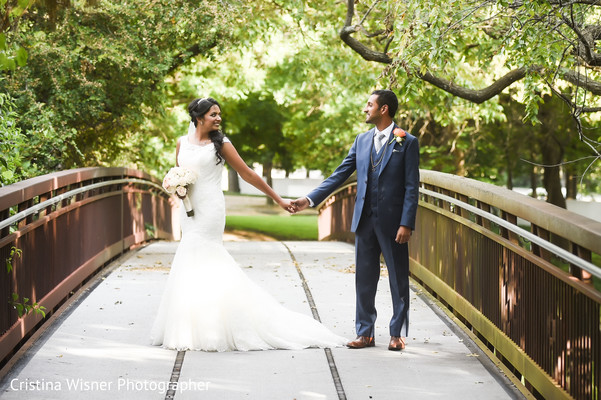 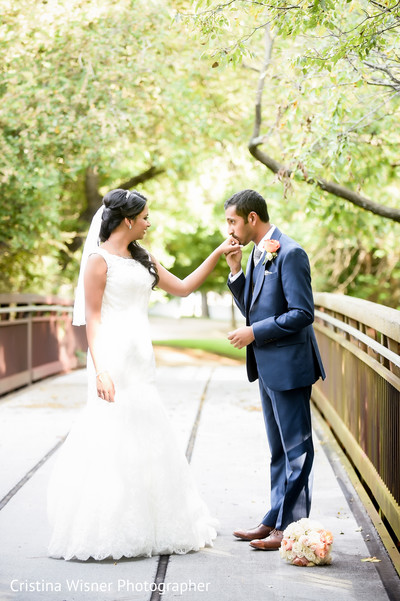 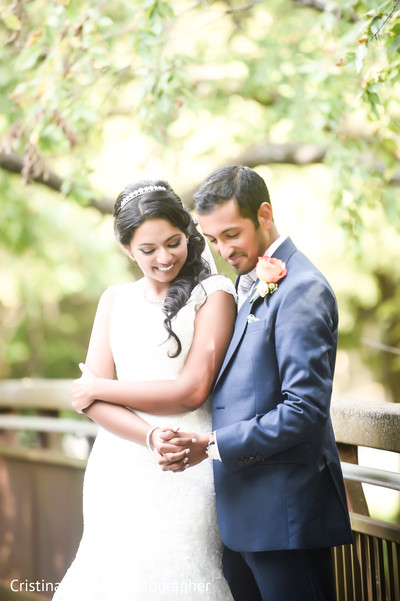 Even though our paths crossed multiple times in college at the University of Texas at Austin and through church events, Ben and I did not interact with each other until Revival 2014 when he asked me to share my testimony. From the beginning, I was intrigued by the way he respected me and saw me for who I was. Later that year, we started texting and talking more often to share my struggles with job hunting and his experiences with applying for residency. I remember starting to be more attracted to his humble personality and his Jesus-loving heart, but I did not think he would be interested in me. I thought he just considered me as someone who could bounce ideas with him and build an innocent friendship with him.

In December 2014, Ben went to India on a family vacation, and I thought that would be the natural end to our conversations. But he continued to keep in touch even when he was away! He even asked me to partner with him on a two-week Internet fast "as he prayed for clarity in his life". God really worked in our hearts during this time and showed us how He was preparing each of us individually to enter into a relationship with each other. We decided to start dating in January 2015 after many prayers, guidance from our parents, and support from our friends

The proposal story is my favorite story to tell, because it speaks volumes about Ben’s character - he is thoughtful, meticulous, goofy, fun, and full of surprises! Months before the proposal, I received an email from my pharmacy school professor Dr. Lawson to invite me to his retirement party in January at his home in Austin. I knew Ben would be in town that weekend, but he refused to go to Austin with me because his best friend (read: best man!) Tobin was visiting him that same weekend. He asked me to take my college roommate Blessy with me instead. Now January was a busy month for me because our church was hosting a national conference. My friend Sherlin and I went to get our nails done as a reward for "successfully hosting the conference” and I thought it would be good until the retirement party as well (I stress this part only because I RARELY have my nails done). The day before this retirement party, Blessy called to ask me if she could drive to Austin the next day so that she can also visit her cousin Jimy who recently moved to Austin. Since I always drive, I obliged. My sister also made sure that I wore the dress that Ben’s sister Rushmi got me the previous Christmas.

On Saturday, January 16th, 2016, Blessy picked me up from my house to go to Austin. I texted Ben to let him know I was leaving, and he sent me a snapchat of Tobin being picked up from the airport. Once we got there, Blessy said that her cousin lived on Riverside and wanted us to meet him at Joe’s Crab Shack across the Boardwalk at Lady Bird Lake. Truthfully, I was slightly annoyed that we had to walk for half a mile in heels down this Boardwalk (Blessy would NOT let me take my heels off). As we were crossing a pier, I noticed that it was set up with candles and Christmas lights, and I turned to Blessy saying, “wow Bless somebody is going to get proposed to today!”. I tried to hurry away but Blessy started slowing down. She then got really close to this janitor that was sweeping the Boardwalk. I was so confused - “Blessy why are you inching towards a janitor”, “Blessy it might be the photographer for the proposal back there”, “Blessy we’re in Austin don’t talk to strangers!”. The janitor lifted his hat, and it was BEN! (Boy knows how to get into character for sure!).

He proceeded to tell me how he loved me (the first time we exchanged those words) and put a ring on it! I always imagined myself to be gracefully crying at my proposal. But all I did was circle through “oh my gosh”, “this is weird”, and “what are you doing!”. I have never been so much in awe of a person until that moment.

Ben then told me he was going to take me to Dr. Lawson’s retirement party. I was pretty hesitant at first, because I did not want to leave Blessy. As he was driving to the house, I was still in disbelief. I wanted to call my dad but he said he wanted to do it together. He asked me if it was everything I imagined, and I said “yes I did not see it coming! I just wish my parents were here”. He got to the house and there were no cars in the driveway. I was beginning to feel embarrassed that now we are super late to this party, but Ben reassured me that we have legit reasons.

I walk in and Dr. Lawson just looks at me with the biggest smile on his face. Before I could say congrats, I noticed a couple pictures at the entry - it was from our proposal! I turned towards the dining area, and all my pharmacy school friends (affectionately known as "the Brownies") were there! I literally stood in the doorway in shock.

As I proceeded a bit further into his house and rounded into the kitchen, I look to the left to see both our parents and my cousins waiting or me. I couldn't believe it! I had felt a little bad earlier for not calling to tell them right after Ben proposed, but now I saw why he didn't want me to.

Coming right up we have the wedding reception that is dressed to impress by Wedding Décor by Faiza with an equally impressive bride dolled up by Draped2Nines. See you right back!