One of the best jollies for an Indian bride is her sangeet and mehndi night. After all, who doesn’t like to be doted on, hand fed, (while your henna dries!) and enjoy in the pre-festivities before your big day(s)? Maharani Jayna’s sangeet night was a mixture of full color, music and lots of fun! The sangeet was held at the SLPS Hall, where Mehnaz Ranmal intricately applied mehndi to the bride and bridal party on the rich and radiant stage. The mehndi and sangeet night was a combined event with the decor appointed by the bride, her mother and two sisters! What I found the most unique for this sangeet setup is incorporating the bride’s mother’s old saris! Pops of orange, violets and pink made the room just glow! The entertainment didn’t stop there as Jayna’s two sisters (after much choreography practice!) did a dance performance in front of the guests. The satak (pooja ceremony) was also held at the SLPS Hall and was a peacock infused theme that assimilated hues of gold and royal blue. After the various ceremonial traditions associated with the pooja, the groom and his family joined the bride’s party and ended with a victorious cocktail hour! The diverse set of events was captured on film by Digital Shaadi Films - Mistry Photography. Take a gander into the gallery for more images of this amazing celebration! 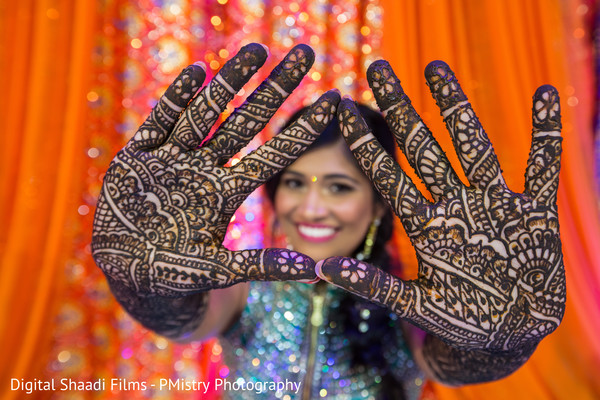 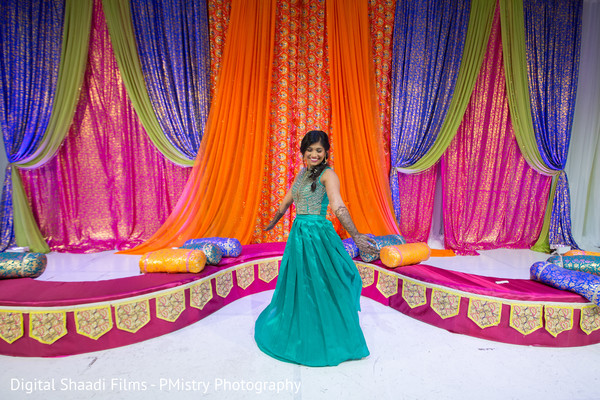 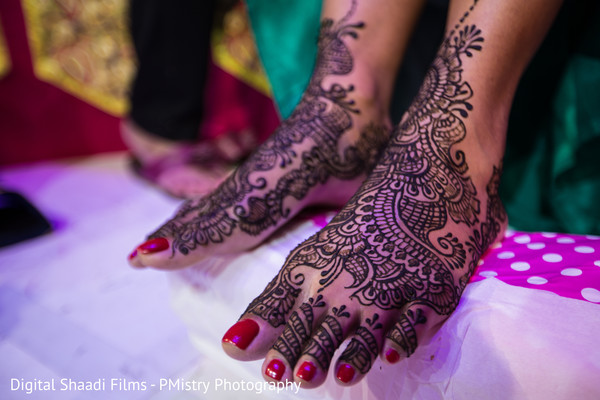 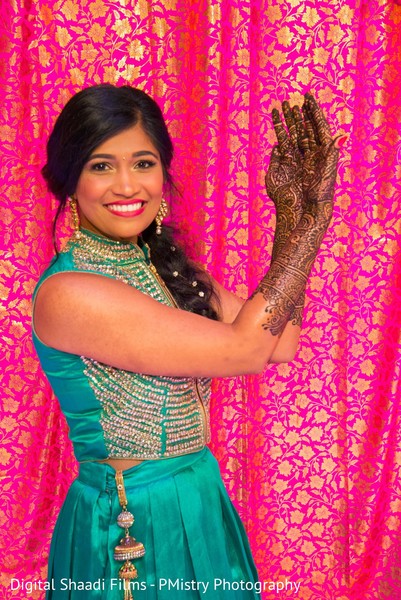 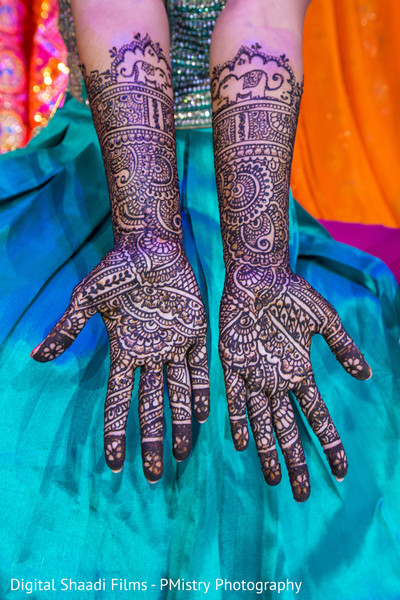 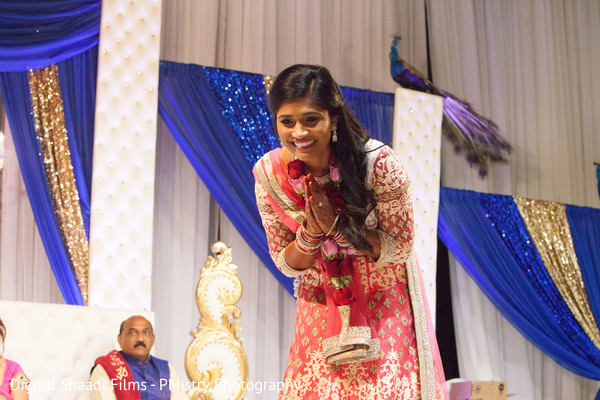 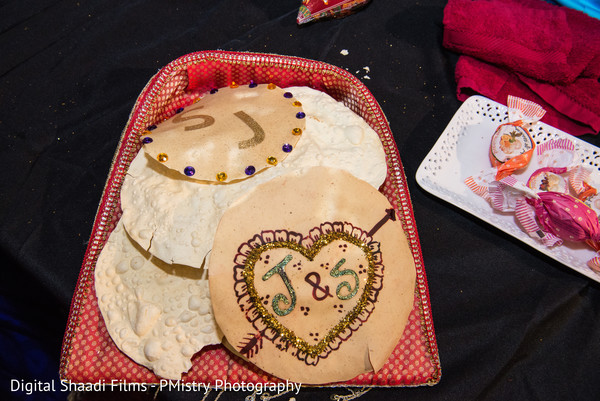 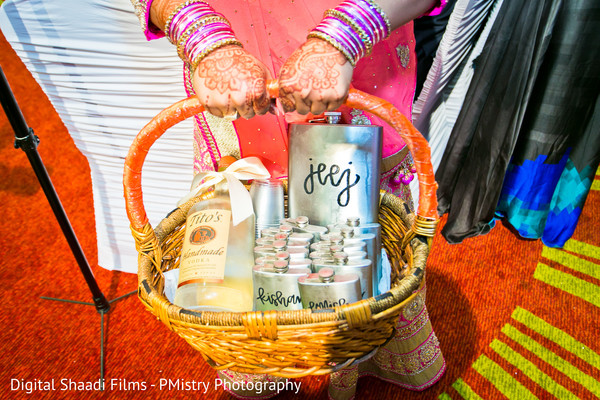 My plan was to move to Houston since I was accepted into my Master's program before I had met Suraj and my dad and Suraj's dad had a mutual friend that they wanted me to talk to and that's how I came to know about Suraj. We started talking via e-mail (those that attended our wedding know the story) and then later through texting and talking and haven't stopped since the day we started 2.5 years ago. The crazy thing is that we have a lot of mutual people that we know, but never knew each other. Suraj is unlike anyone I have ever met. His confidence, calming demeanor, and knowing what always to do next is how I knew he was the one for me. I had all my plans in life set out, knew where I wanted to go and what to do, but he was the only missing piece.

Our proposal took place in Houston, Texas on March 4, 2016. I was already living there since I had moved for school and he took me to the Water Wall near the Galleria Mall. It was funny because he kept trying to pull me into the waterfall, but I wasn't having it considering I was wearing a white dres.  He got down on one knee and popped the question. I was so shocked that my first response was no. I wasn't expecting this at all since we were planning for our engagement ceremony to be in April and later came to know that he had bought the ring back in January when he went to India. He did good. His friend, Bhavesh, was there photographing the whole thing. Later on, he took me to the Rodeo (a famous Houston event) and we ended the night watching my favorite singer ever, Jason Derulo, perform.

Tell us how you went about planning your wedding, and your overall experience the Venues, Hair & Makeup, Outfits, Decor Theme, and all of the other important details.

Wedding planning a seriously no joke. The first step was picking a date and venue, our Samaj Hall was the only place that my parents would have the wedding so that part was easy. I was only able to take a two week trip to India during the wedding planning process, but surprisingly I did my wedding shopping in just two days and all in Bombay. Having them alter the outfits and send them back to you was the part that took the longest, didn't know that. My outfits were a combination from Bavri and Aishwarya. Wedding shopping is so much easier in India as there are so many options, I learned early on that showing Pinterest pictures to the stores wasn't going to do me any good. I just had them show me outfits and chose from those options. Highly recommend just going with an open mind. My bridesmaids and Suraj's groomsmen outfits were from Bardoli and Navsari. Finding a wedding decorator was hard as I shopped around to get a good price, but once I signed with Decor One I had two meetings where I explained what I was wanting and picked my themes, table covers, and center pieces. The details as far as setting up and taking down they all handled on their own. I just had to coordinate with the venue as far as table set ups and when the team could come to decorate. My DJ was the easiest to pick because I already had Asad and Outspoke Visions in mind since I have seen their work, I gave Asad a schedule of the wedding and reception and they handled and coordinated perfectly. I used the website Thumbtack a lot during the wedding planning process, that's how I found my makeup artist. A different makeup artist cancelled last minute the morning of my wedding for my sister's makeup and Liliana stepped up and did all three of our makeup that day. My sister's friend is the one that made our cakes, I actually never met her but sent an idea of what we wanted for the cakes and they turned out perfectly especially incorporating Houston into Suraj's cakes. She offered us unlimited flavor choices.

Suraj actually went shopping in India first since we weren't able to go at the same time. I knew I wanted something that was red and gold and I took a picture of his outfit when I went wedding shopping for mine. The people at Bavri are amazing, they are attentive to what you want and they even chose my jewelry for me.

What did your guest particularly love about your Wedding?

They loved how organized the events were, we had a lot of help from my parent's friends and my parents actually had a get together before the wedding so that everyone that was going to be involved was on the same page. They also said that the cake was amazing.

Our group hug with my three siblings, Suraj, and his sister after the wedding and our surprise flash mob at the reception.

Pithi ceremony was at home, I wanted one event to be there and that's how we started off the week. The decorations were done by me, my Mom, my two sisters, and my Masi with my Dad and Masa supervising. We actually used my Mom's old sarees!

Not quite done yet, that was just the pre-festivities! See you in a bit for the wedding and reception for the awesome baraat led by Outspoken Visions Entertainment!