Welcome to Maryland for yet another gorgeous Indian celebration! This Indian wedding ceremony kicked off with a festive Raas Garba at the Hilton Baltimore BWI the night before the big day. For those that are not familiar with this type of ceremony, this event is in a form of a dance where both the bride and groom’s side of the family participate in a festive dance off. This event is one of my favorites because it is a time to meet your new family in a festive and fun way. The bride wore a colorful peach and gold chaniya choli, which is a three piece dress that is commonly used when dancing. Because of the way the skirt flows, all the women participate in the dance in a straight line so the synchronization of all the skirts flows in unison. The next morning guests got up bright and early for the Baraat & Wedding, within the same location. Maharani Sneha wore a traditional red and gold sari draped in the Gurathi wedding style which was accompanied by traditional gold earrings and necklace. The bride’s sari itself was unique, crisscrossed with intricate Indian designs. The groom showed up in style atop ivory white Lamborghini from Imagine Lifestyls Luxury Rentals. The couple exchanged weddings garlands handcrafted by Vivek Flowers, sealing the union between man and wife under a crimsom red laced mandap crafted by Palki Mandap. At the forefront of the camera was Channa Photography who has graciously provided all the photos that you can find in the gallery. Read on below on the 411 from the bride herself! 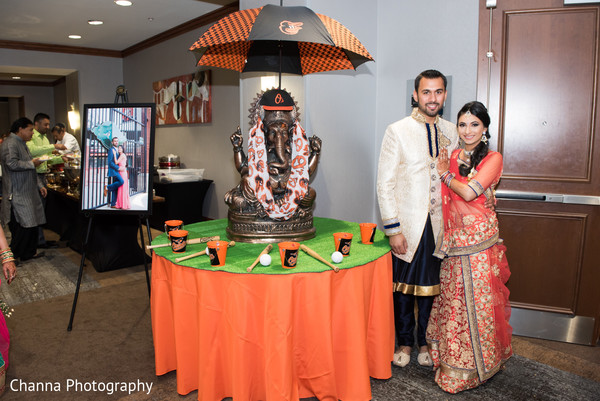 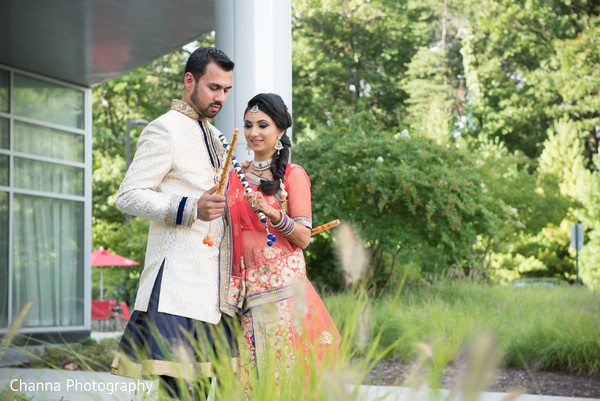 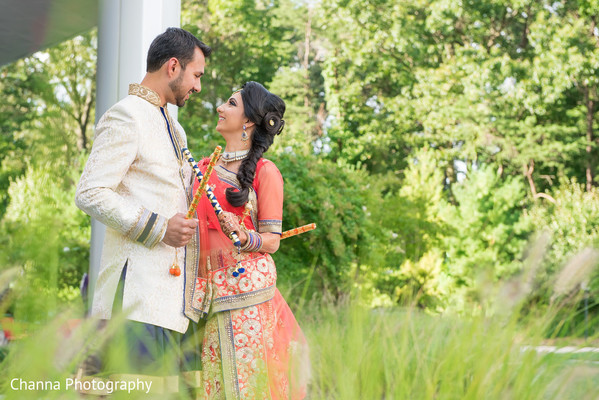 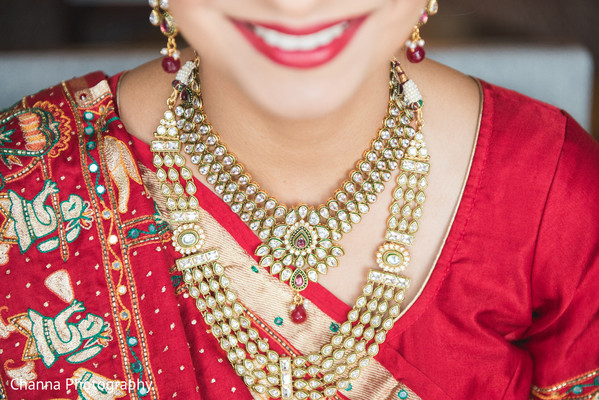 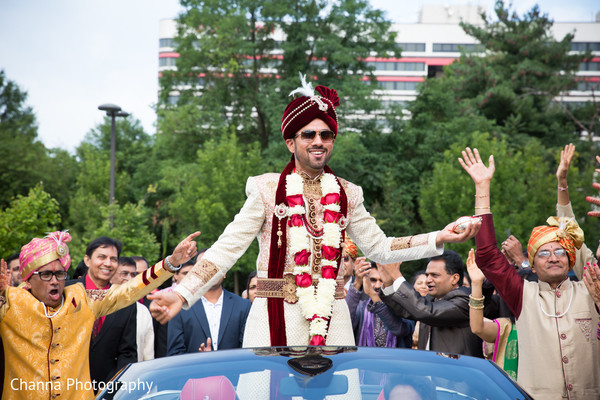 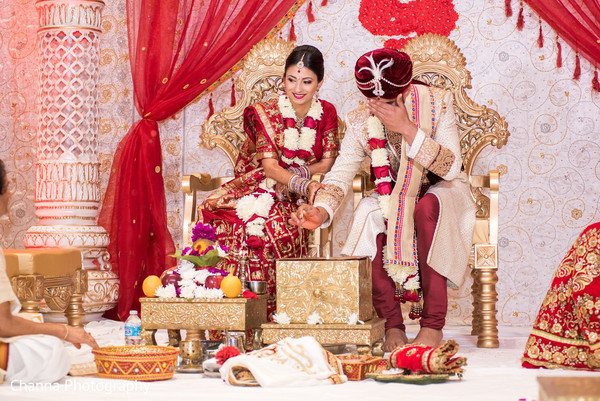 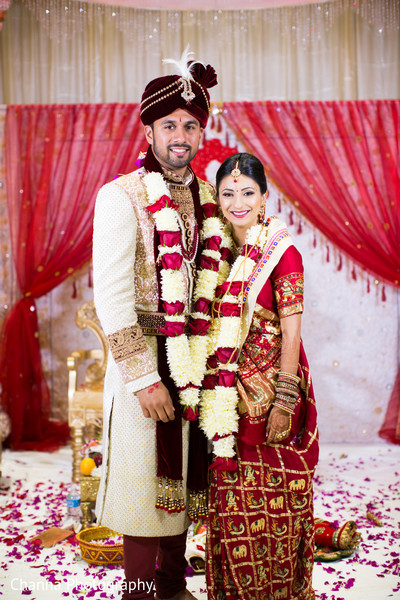 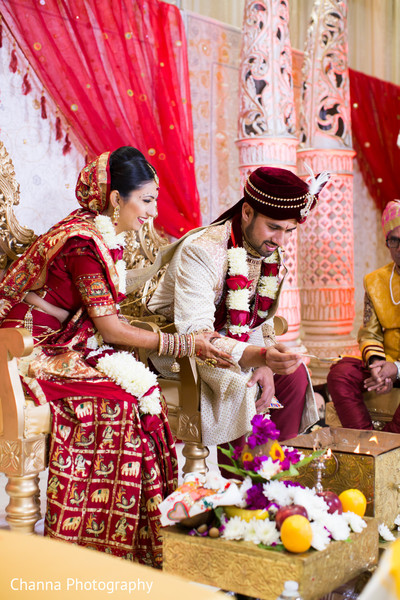 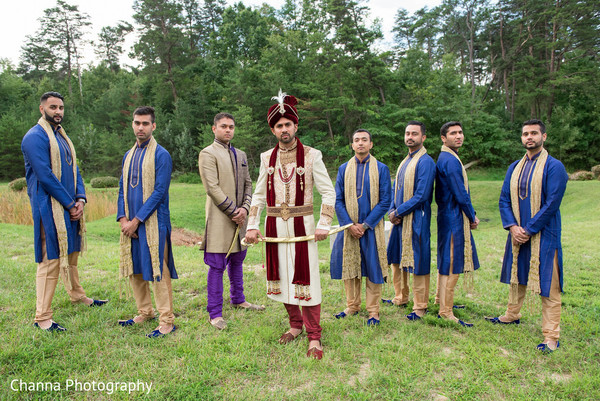 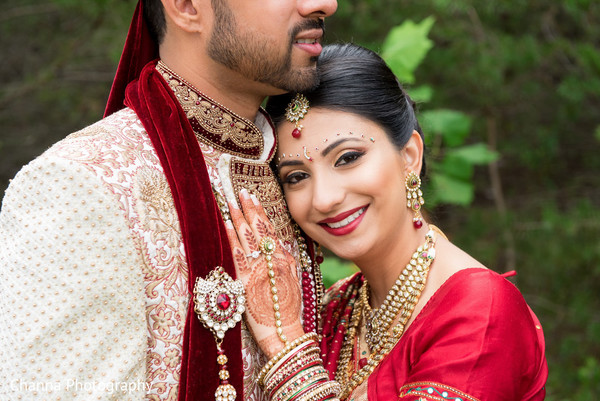 How did you meet your Raja and when did you know he was "the one"?

Akash & I first met at our local KPSNA samaj Diwali Party in 2007. I knew he was the one since we had separated to go our own ways to college and yet we still single waiting to move back home and start dating.

Do you have a super romantic proposal story or engagement memory?

Sneha was in Boston finishing up her last semester and had no intentions on coming down to Baltimore the weekend of the 16th since her parents were driving up to Boston for her cousin’s graduation. Akash knew that his window to propose to Sneha and to make sure that all of their friends and family could make it was extremely slim, so he really made sure that he picked the perfect date. Following much brainstorming with friends and family, he came up with the perfect idea! He had his only bhabhi send out a fake evite invitation saying that the birthday party was going to be on Saturday May 16th. B. Till now everything had been going according to Akash’s plan. Just to be on the safe side he wanted to play mind games with Sneha so that she wouldn’t get any idea! To execute this, Akash told Sneha the day of her flight that he would be picking her up as she arrived to Baltimore, but then ended up backing out last minute just to upset her. Furious as any girl would be, Sneha was super heated since Akash had bailed out on her. Left hanging, Sneha had to figure out her own ride back home, but Akash had planned this to happen and had Suzan awaiting on speed dial to pick Sneha up! As time passed Sneha kept showing her frustration towards Akash, as she wouldn’t return his phone calls or reply to his text messages. As he kept trying to get in touch with her, Akash was finalizing all the last minute arrangements as well as preparing for the upcoming day!

The day of the proposal, the plan that Akash had designed was that Suzan & Sneha would pick up Ankit (Sneha’s brother) from his work which is located in the heart of Baltimore city and would drive down to Virginia for Amaya’s 1st birthday party! On the side note, Ankit had notified Suzan & Sneha to pick him up from Federal Hill Park so that they could take pictures since the girls were all dressed up. Waiting for Sneha & Suzan to arrive to the park, Akash had all the balloons, props, camera, friends and family ready for this auspicious day! As time was winding down, Akash’s nervousness level was sky rocketing by the second, as he was super excited to execute the amazing proposal for Sneha! As she arrived to the park, Akash had lined up multiple stops along a trail that looked over a view of the entire city of Baltimore. Each of the seven location had a jar filled with different candies that she loved along with a large red balloons, and a message for her to read. As she was walking towards the last stop, Akash was hiding behind a few bushes waiting to approach Sneha at the right moment. As soon as Sneha started reading her message, Akash slowly walked up to Sneha! The moment Sneha turned around Akash took her hands and started reciting everything from his heart! Sooner then later, Sneha had started tearing up a bit which is when Akash knew would be the perfect moment for him to dropped down on his knees and ask the magical question! Before Akash could finish asking the questions Sneha screamed out saying YES!!!! Jumping up and down, she started seeing all of our friends and family approaching and was just shaken up by how her life had changed in a few moments. Continuously asking everyone on how Akash had pulled this proposal off, Sneha was mesmerized and simply couldn’t get her mind around it. After explaining the whole process on how Akash had planned out the proposal, Sneha finally understood on why he had to make her furious.

Having the biggest smile on her face, Sneha was so pumped that she wanted to start planning the wedding the same day!! As time went on and wedding planning started right after the proposal, Akash and Sneha are extremely happy that all their friends and family could make it to the proposal and really hope that all those that are reading this will make it to their wedding to make 9-4-16 the most memorable day for them both!

Tell us about your wedding style. When you sat down to really figure out how your dream wedding would look, did you start with one central color, a palette of colors, or a theme that served as your inspiration?

Akash and I both are from Baltimore, Maryland and we both love all of the Baltimore sports team. So we decided to make our save the date card a Baltimore Ravens ticket. Then we had our garba Orioles theme with orange and navy blue colors. Our wedding was traditional red/cream color. Our reception was Baltimore Ravens theme with black/purple/gold colors.

Looking back, was there a really special moment that you remember from your wedding that stands out as the most magical?

The most special moment was during our first look when Akash told me how beautiful I looked, told me how happy he was to marry me, and told me how grateful we are to have each other along with our friends/family support.

Did you and your Raja have a special song that you danced to as your first dance? How did you choose it?

Our first dance song was "Sab tera". We decided to chose that song because it was the only song we kept listening to over and over again when we were driving to see our vendors!

Did family or friends help out with certain special details that really added to the event?

Both families love dancing and making the entertainment special. At the garba we had surprise dances from the grooms side (mother-son dance) and from the brides side (mother-daughter dance). At the reception the brides family danced to the grooms favorite artist DRAKE which made it very special and personal.

We keep it Maryland as we return to the reception venue! Make sure you return to catch all the archaic details!