I was over the moon when the photographers from Life's Highlights shared this next shaadi event with us because I can never get enough of a Suhaag Garden wedding, and the floral and decor experts definitely left their magnificent mark on this South Indian fusion celebration in Tampa, Florida! Before we can deliver those extraordinary details to you though, meet the bride and groom of the hour, Ann and David! This collection of images from their pre-wedding, first look and Catholic ceremony at the Sacred Heart Catholic Church will definitely set the stage for the breathtaking details that still lay ahead. This airy affair is so visually appealing, and it gets even better when we get to the post-ceremony soirée at the Tampa Marriott Waterside Hotel & Marina! We just adore the South Indian bride's beautiful white wedding gown by Matthew Christopher and her sweet-as-can-be hair and makeup by Michele Renee The Studio. Maharani Ann has picked out the most vibrant, hot pink and gold saris for her bridal party, and her hubby-to-be is rocking a handsome bow tie to match! When I get back, I'll be delivering on the gorgeous goods from Suhaag Garden at the reception, but before I do, make sure to head into the complete gallery for more breathtaking details from Ann and David's wedding ceremony and their spectacular wedding portraits! 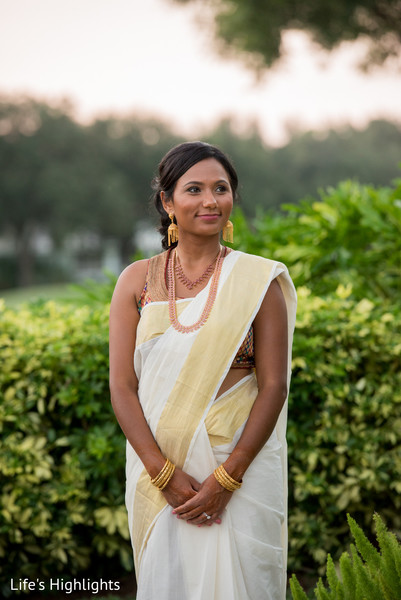 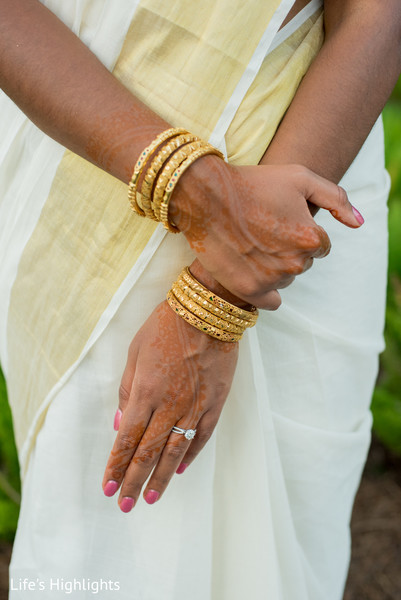 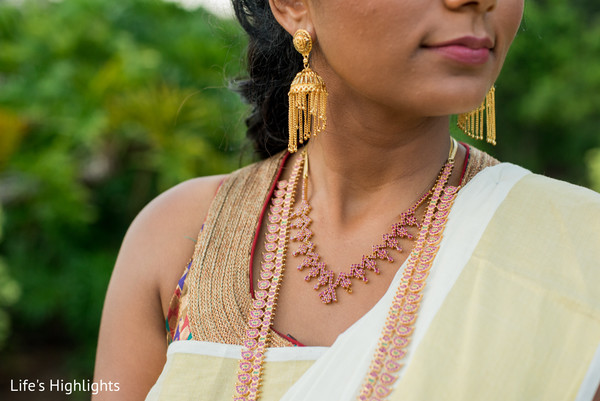 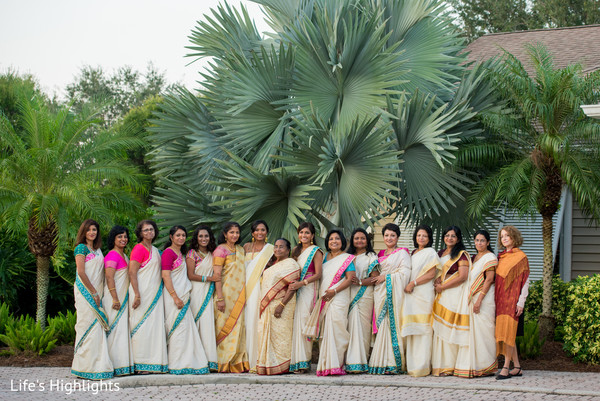 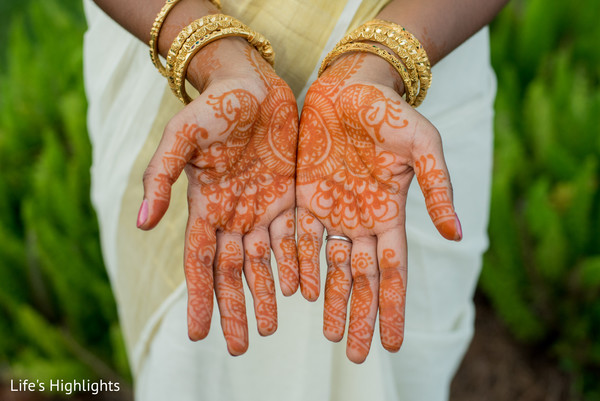 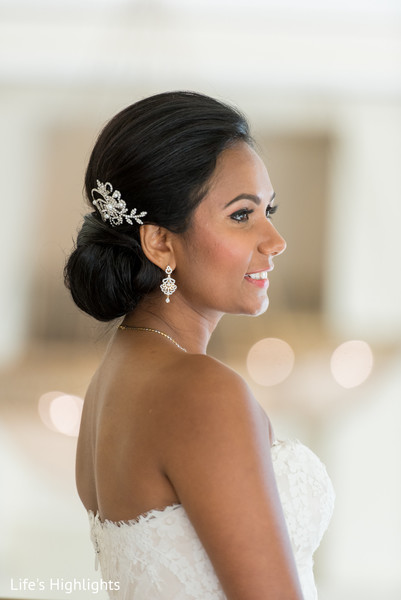 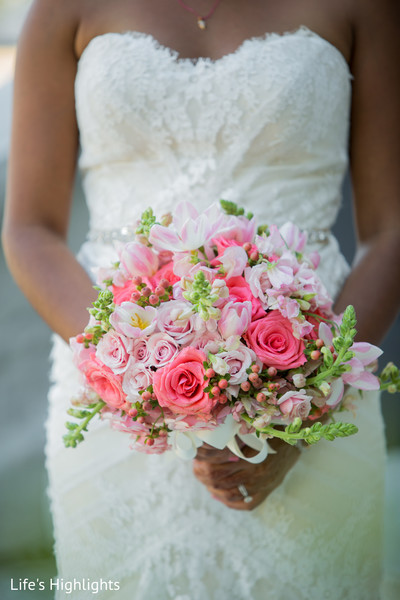 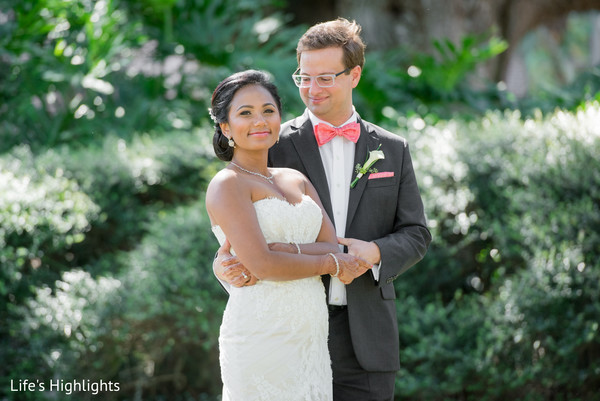 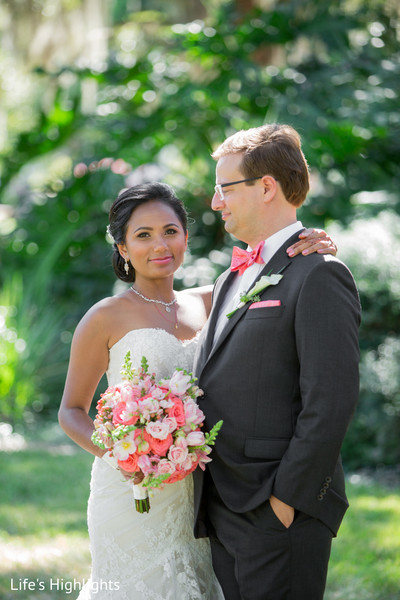 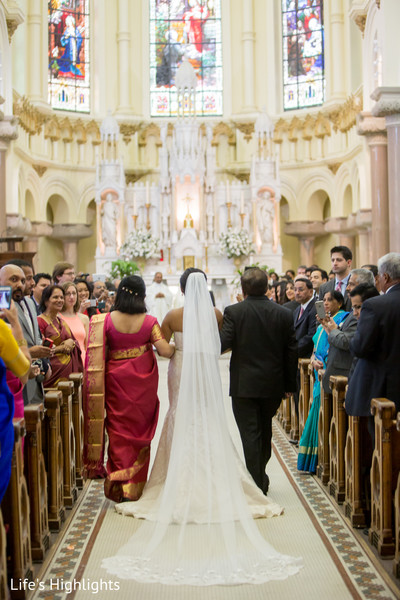 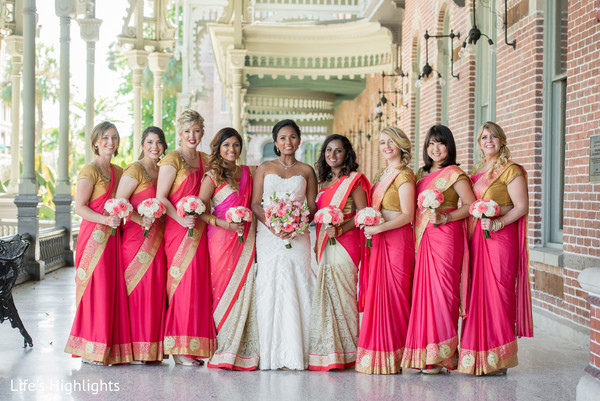 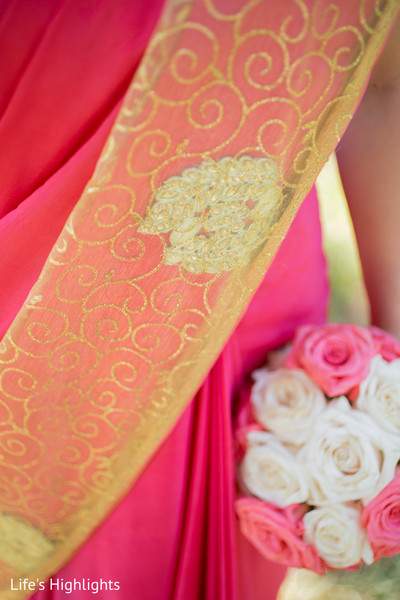 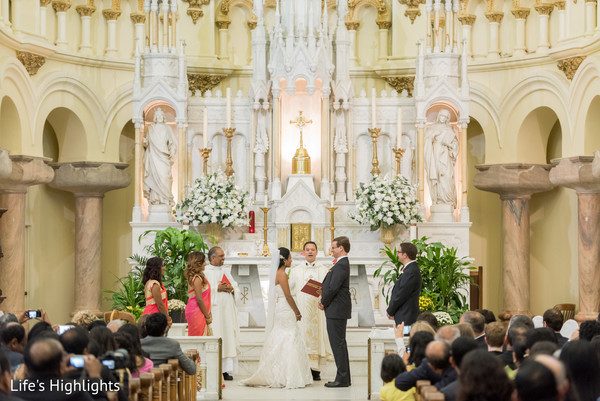 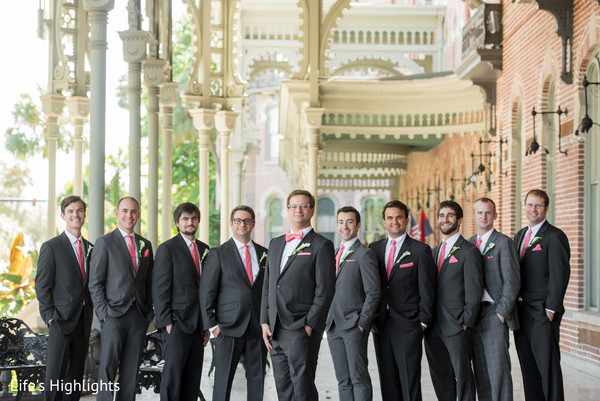 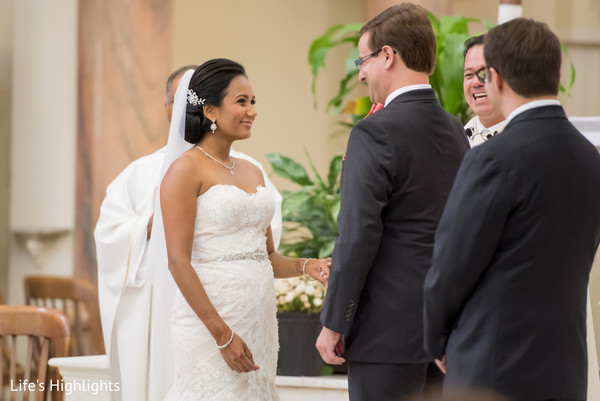 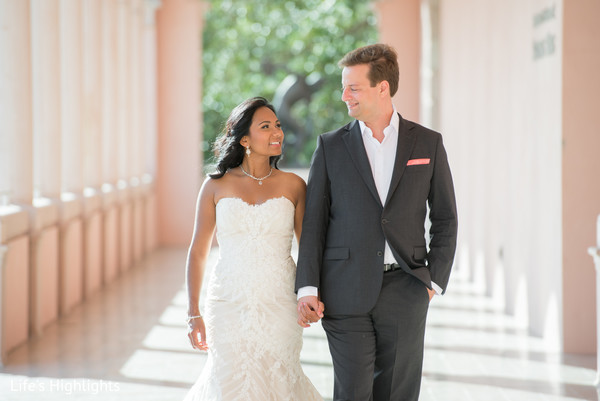 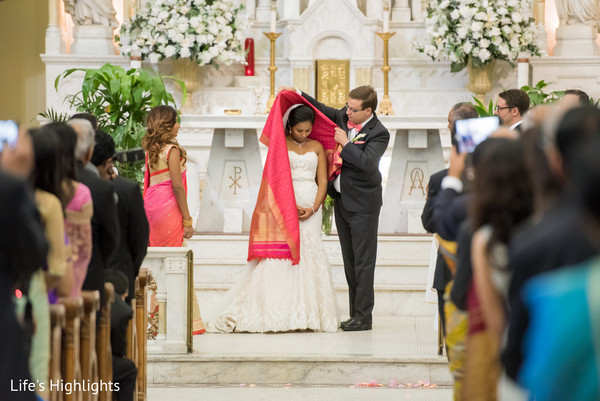 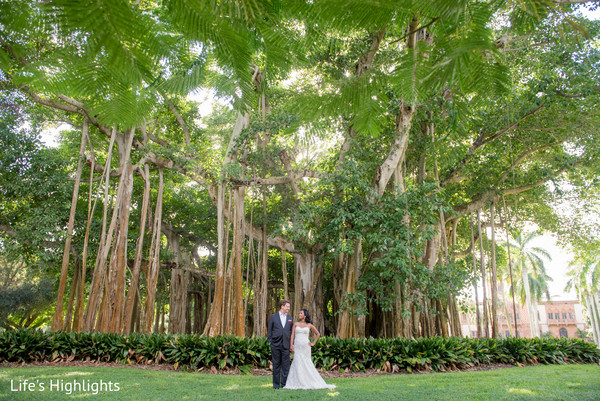 Maharnia Ann, on meeting the Raja of her dreams, David:

"David and I met at a conference on Indian entrepreneurship at MIT in Cambridge, MA. David started India's first self-drive (no chauffeur) car-rental company in India, Zoomcar. I knew he was the one on our second date. He showed up in a grey trench coat and a brimmed hat. I thought he looked like Inspector Gadget (a cartoon spy). When he saw me he said that he was always told to dress for the job you wanted --- a cartoon spy. He made me laugh and I decided he was the one for me."

"I was finishing a semester of research in Bangalore, India, the same city where David had started Zoom. We planned on dinner at our favorite restaurant in Bangalore – one with a flamboyant Italian chef who we had become good friends with. Suddenly, David started acting very odd i.e., he said he had to shower, shave & change clothes before dinner. His normal attire is a Zoom t-shirt and pants, so I was definitely suspicious because of his sudden interest in fashion.

Things got even weirder when David suggested we take an Uber instead of a rickety rickshaw, and that we have a drink at the bar before dinner. Someone had told me that the best indicator of an upcoming proposal is when your significant other acts bizarrely. In light of his extremely un-David-like behavior, I wondered if he was up to something. Anyway, I stopped thinking about it.

David and I started talking about our lives together in India and beyond. I had already told him a few times, "I'm not talking about the future until I see a ring." Usually, he just rolls his eyes. But that night he surprised me with the proposal! I immediately blurted out: “Where did you get this ring?!” I quickly got it together and told him that it was about time David gave me the same beautiful ring that his great-grandfather gave his great-grandmother in 1917. His great-grandfather died during the depression, just after their 5th child was born. His great-grandmother faced a lot of hardship and sold everything she owned, but still kept her engagement ring. David gave me this ring because we both love history and the ring symbolizes both his family’s history and love’s endurance, even through hardship."

On planning her dream wedding:

"The planning process was largely stressful! There were a lot of details, a lot of people coming, and a lot of conflicting family preferences. My fiance and I were also long distance between California and India, I was studying for the bar exam, and I was living in a different state from where the wedding occurred. It was tough!"

On her hair and makeup:

"Michele Rene did my makeup. I wanted a classic look with some color but not too much makeup. I like the softer and more natural look. Michele and I met and we played around with a few makeup looks and colors before we found one that was perfect for me."

Don't miss out on the most incredibly stunning reception decor inspiration, coming up next!