Happy Friday, Maharanis! If you're looking for the perfect way to bring in the weekend, then you're in the right place! We're reveling in two of the most sensational Indian weddings today, starting with this incredible event at the amazing Hilton Charlotte Center City! Carolina Wedding Belle planned this amazing affair, which featured some of their most stunning wedding decor work ever! Just check out these highlights from the Indian bride and groom of the hour, Vaishali and Sutan's, baraat and ceremony! The Beauty Fairy has fabulously styled Maharani Vaishali's hair and makeup, and our picture perfect Princess is looking flawless from head-to-toe in her white wedding lengha. Her hubby-to-be plays the role of dashing Raja handsomely in his traditional white sherwani, and these memorable moments captured by All Bliss Photography from their sunny outdoor ceremony are simply splendid! I'll be back in just a bit with a look into their spellbinding reception, but in the meantime, make sure you check out the complete gallery for more fantastic highlights from the ceremony — plus an exclusive peek inside some of the pre-wedding celebrations! 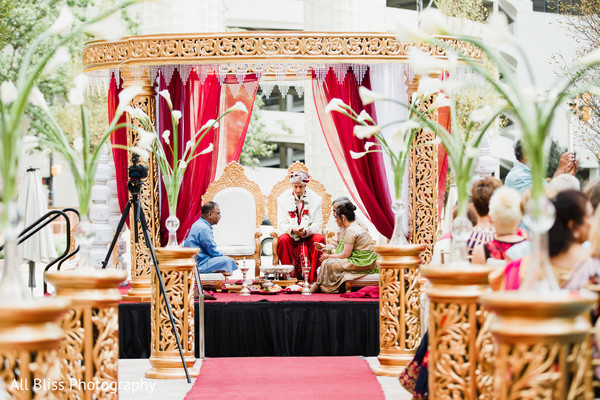 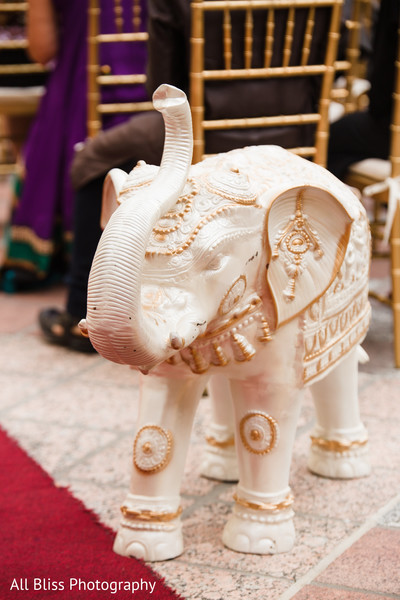 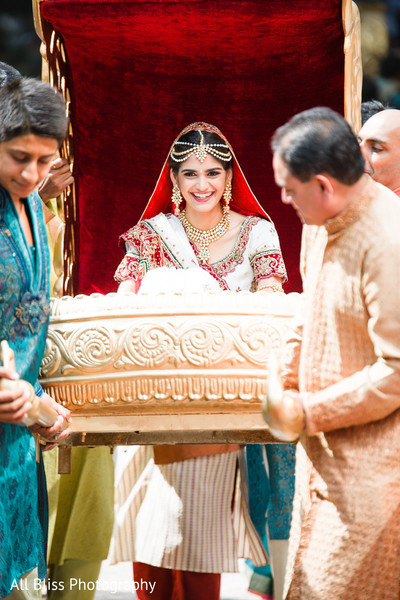 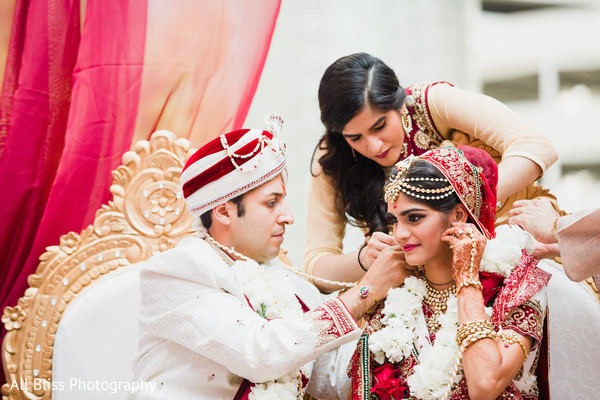 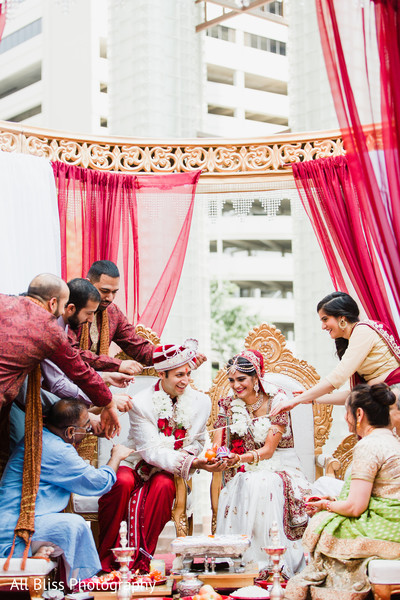 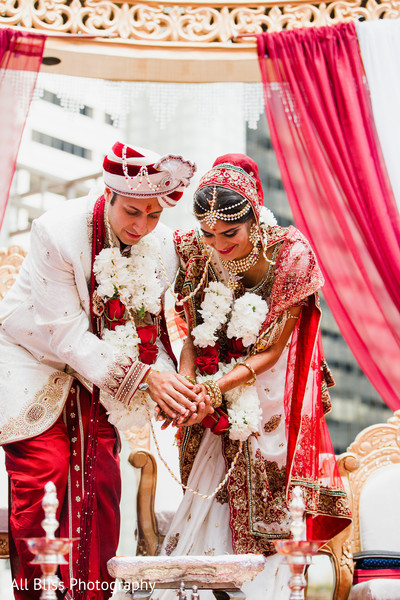 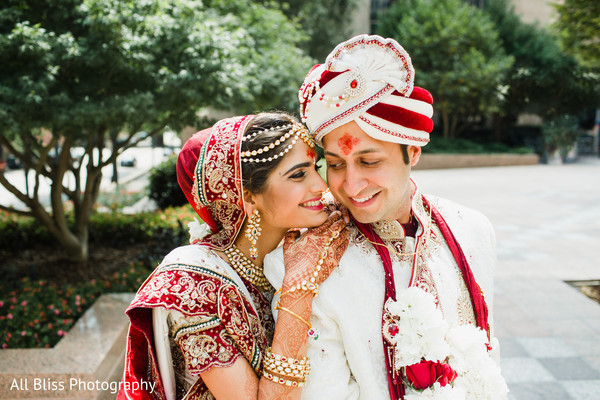 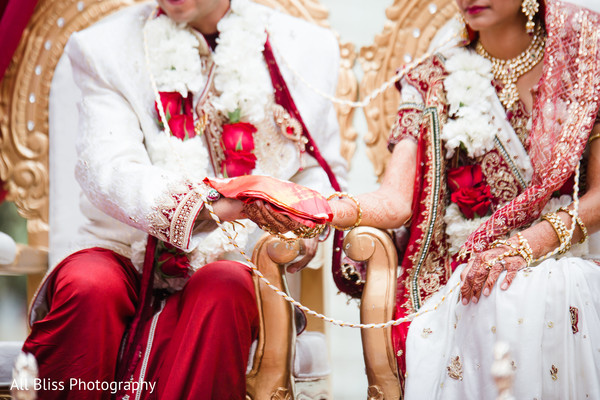 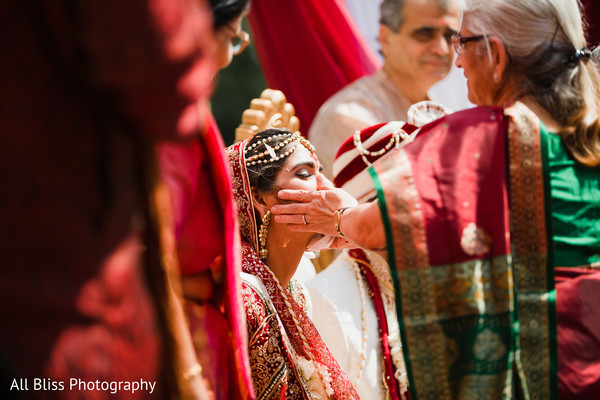 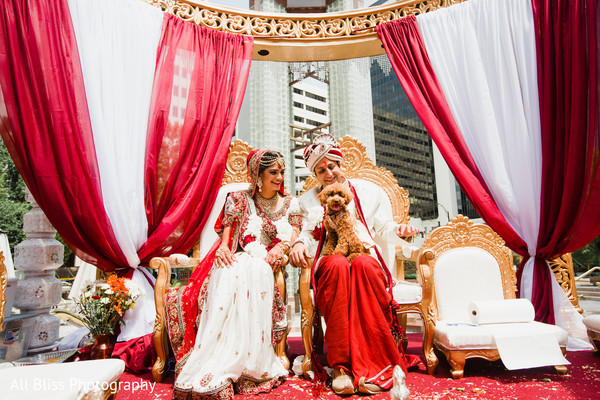 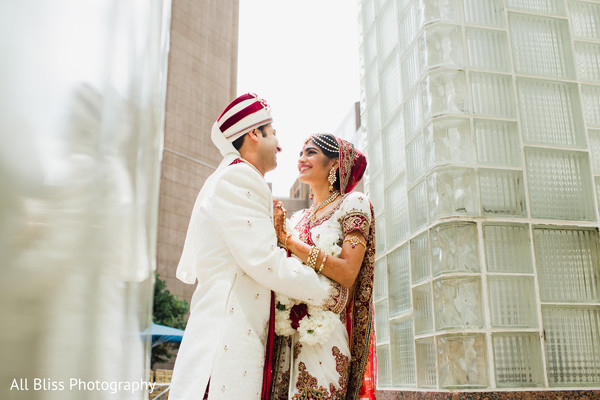 Maharani Vaishali, on how she met the Raja of her dreams, Sultan:

"During my sophomore year of college, I met Sultan while on a trip to Atlanta. At the time, I thought he was a crazy kid obsessed with basketball and eating large amounts of food. However, after our initial meeting, we kept running into each other at the gym, or while out with friends. One day, I decided to just say hello to him, so I ran up to him as he was leaving the gym, and said, "hey! How are you?"... and so it began. Sultan and I would go to Rita's on occasion, mostly because it was the closest thing to ice cream I could eat. This became more frequent each week... until we went to Six Flags one weekend. This Six Flags trip was just the first to an entire novel of one-day vacations we would make. We somehow snagged a deal on a season pass, that lasted for two seasons instead of one, and we just couldn't stay away from the park! So on our first Six Flags adventure, we basically, just, well.. fell in love! We had so much fun together, we talked about everything under the sun, and even with a major mishap (my camera got lost on a rollercoaster!), found that we couldn't think of anything except each other. It was two days later that Sultan asked me to "go out with him" with a precious wooden plaque that he painted and a recycled soft teddy named "bluenose".. and so started our everlasting relationship on October 14, 2009."

On her Raja's unforgettable proposal:

"To make a long story short, Salt created an entire day of scavenger hunting around Fall Creek Falls, a park that we visited annually since October 2009 (when we first got together). This special day began on July 14, 2012, which was our 33rd month anniversary. For anyone that knows Salt, there wasn't a more perfect day than this one, 33 is his all time favorite number. The scavenger hunt included laminated clue cards, photos of us on our previous trips to Fall Creek Falls as hints to find the next clue cards, measuring tape, a shovel and gloves, waterproof boxes he had buried under the ground two weeks prior, a video camera that he recorded the entire adventure on, and a safe he had me decode before he popped the question! It was an absolutely perfect surprise!"

On shopping for her dream wedding lenghas:

"I spent hours upon hours on pinterest, as I'm sure many other brides would say. Although this was very helpful for finding what style I wanted to go with, what colors would go well together, I ultimately found my outfits while shopping with my family in India. One of the first stores we went to in Ahemdabad, one of the first saris I tried on, I was in love. It was the perfect outfit, white and maroon, with beautiful hand embroidery, I knew it was the one. My mom told me to keep looking since we had only just started, so we did, for 2 more days, and we ended up right back at the same store, hoping that no one else had bought that one of a kind piece. Luckily, I had come back in time, and I had my dream sari for my wedding! The lenghas for the garba and reception were also one of a kind pieces that I found in Ahemdabad and Mumbai. It was a very special experience to shop with my family in India for these outfits, I know I could not have found exquisite glam that I found in India, anywhere else."

On her hair and makeup:

"I browsed various hair and makeup looks online to come up with some ideas of what I would like with my outfits. I showed these to my stylist (Meliha from The Beauty Fairy), and told her that I really wanted looks similar to the ones I had found. She did such an amazing job recreating the looks that best suited me, my outfits, and my own personal style. I was beyond thrilled with all of my looks! I literally felt like a princess thanks to her."

Meet me back here later today for some sensational post-ceremony moments from Vaishali and Sutan's reception!