The Beauty of Henna Art for Indian Weddings

Henna is one of the first things many westerners visualize when they think of Indian culture. The reason for it is simple - henna tattoos are beautiful creations that are ephemeral. After they darken, these works of art slowly fade away until only the natural skin tone remains.

The application of henna tattoos on the bride and her closest friends and relatives is one of the most popular ceremonies in traditional Indian weddings. Here is what you need to know if you have been invited to participate in a Mehndi ceremony.

What Does it Involve?

Henna tattoos are usually applied freehanded, though it is increasingly common for pre-drawn images to be used instead. Regardless, a special paste is applied to the skin and allowed to soak for a predetermined length of time.

The longer it is allowed to soak, the darker the resulting “tattoo.” It is considered a sign of good luck/fortune for the bride to have exceptionally dark henna tattoos on her wedding day, so expect this process to take some time!

Unlike permanent tattoos, it is very easy to fix mistakes before they impact the entire design. All you have to do is use a cotton swap and petroleum jelly to wipe away the mistake. Just make certain you do it quickly!

It is customary in many parts of India for the bride to include both her and her groom’s images on her arms. This image includes a marvelous example of the final result when it is done right.

Light is an important element of Indian marriage traditions. The “brighter” the events, the better the resulting marriage. This philosophy extends to the henna tattoos, with sunbursts being a common element of many designs. This image showcases two common threads inherent in many wedding patterns - the light, and symmetry on both arms. 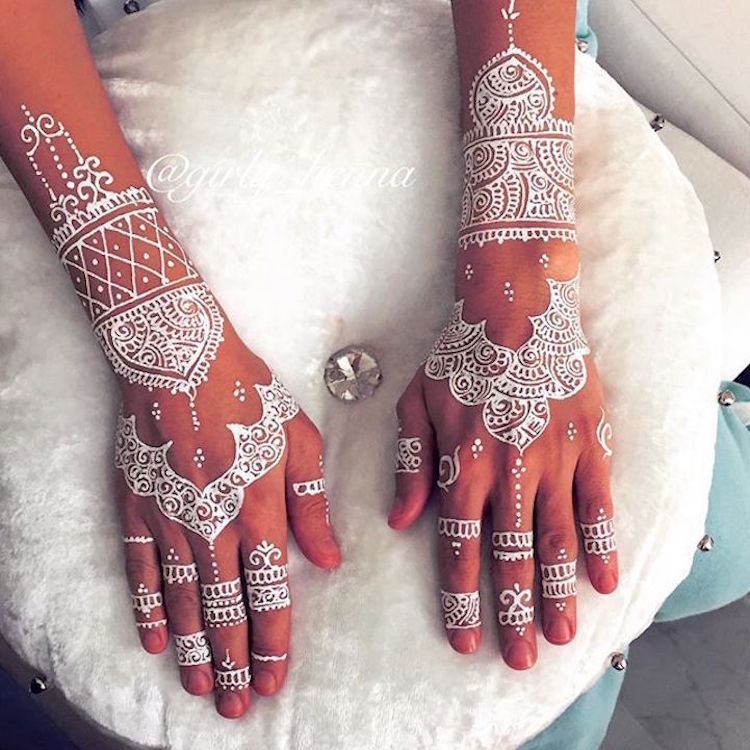 Traditional henna tattoos use dark ink. However, modern ceremonies often change this up by including a variety of colors in the designs. This woman, for example, chose to use white ink to complement her dress. Speak with your henna specialist or wedding planner to see which designs will work best on your special day. This fresh design utilizes traditional elements in a new way to create a truly unique work of art. Specifically, the tattoo is meant to be mistaken for a specially crafted glove and as such may only cover parts of the hands.

The Mehndi ceremony is a beautiful, woman-only event where the bride is covered with the most beautiful henna tattoos possible. It is believed that henna art for Indian weddings symbolizes spirituality, love, and dedication for the bride and all others that receive the tattoos. Beyond weddings, they are unique and easily applied fashion items that can be tied to a specific event, season, or even dress.

Speak with an experienced Indian wedding planner today to see which Henna tattoos will work best with the ceremony you are planning. You may be amazed to see how one design can bring together every other element of your ceremony!