Today's blushing Indian bride called on a couple of the most sought after beauty experts to deliver a flawless look on her big day, and it's time for her to reveal what those talented artists did as she meets the Raja of her dreams for a first look portrait session! Erica Bogart Beauty made sure Maharani Nickita gave great face with a glowing marital mug and soft pink hues, while Gunn Glamour teased and tamed her wedding day hair into a fabulous updo! Garrett Frandsen captured these memorable getting ready moments and bridal details from Nickita's morning, and we're loving up her gold jewelry and salmon-colored lengha to pieces! Her breathtaking mehndi design by Beauty You Deserve is as detailed as it is divine, and we're just itching to share the highlights from her and Shiraz's Indian wedding ceremony with you next! For now, make sure you check out the gallery for more of happy couple's first look portraits and fashionable details before we return with more from their stunning event planned by Envi Event Planning! 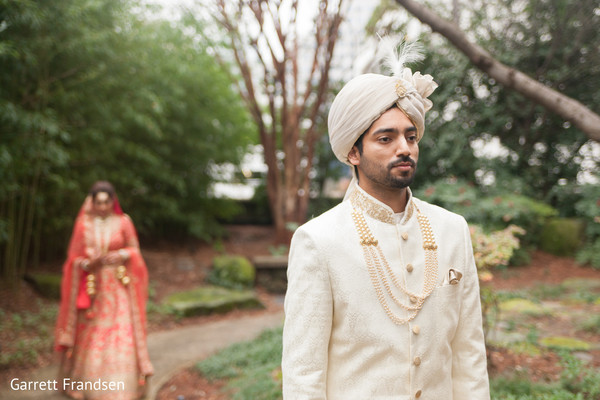 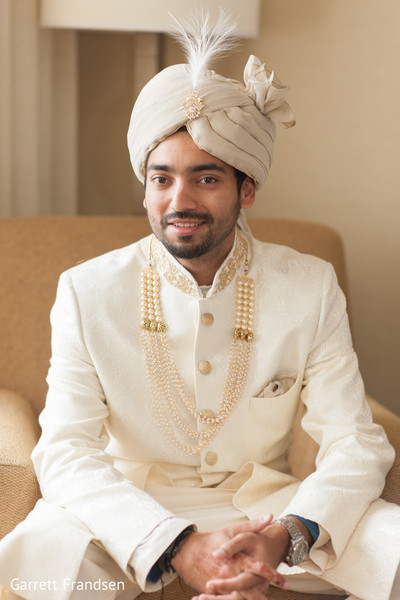 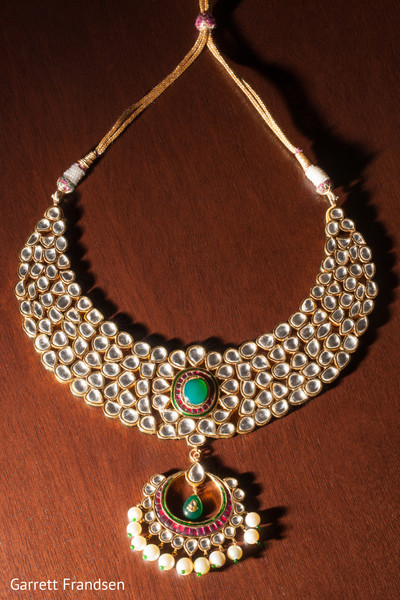 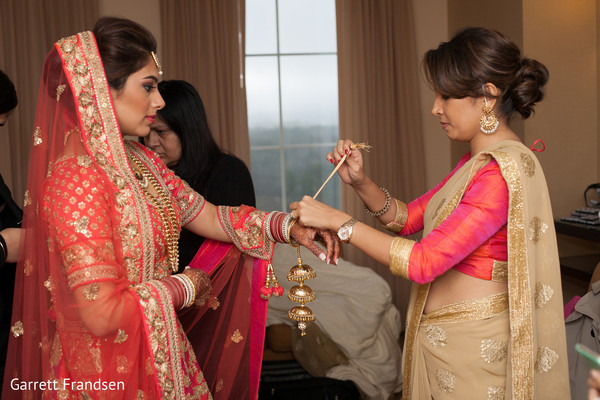 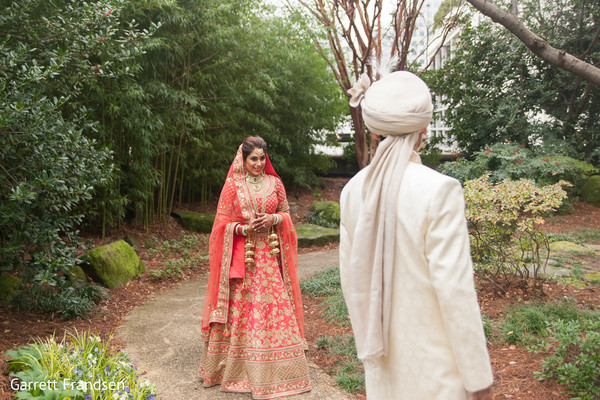 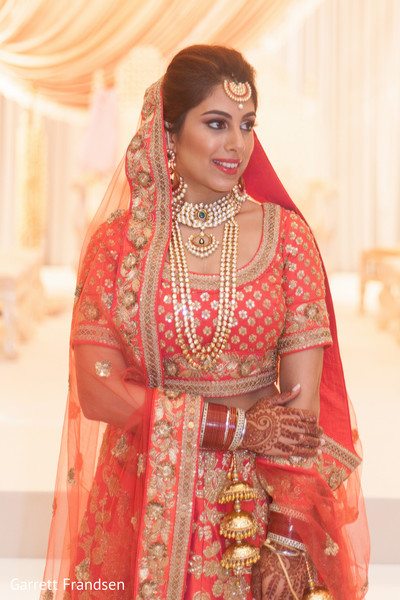 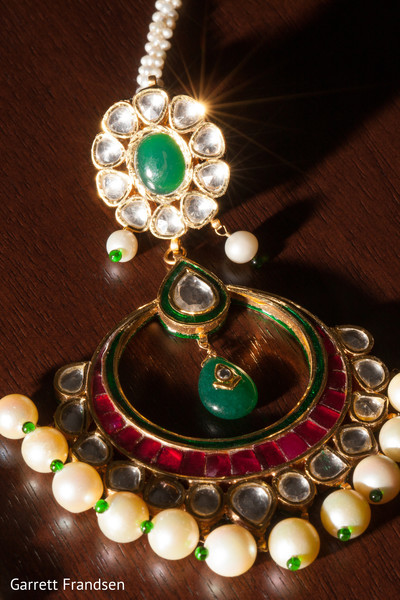 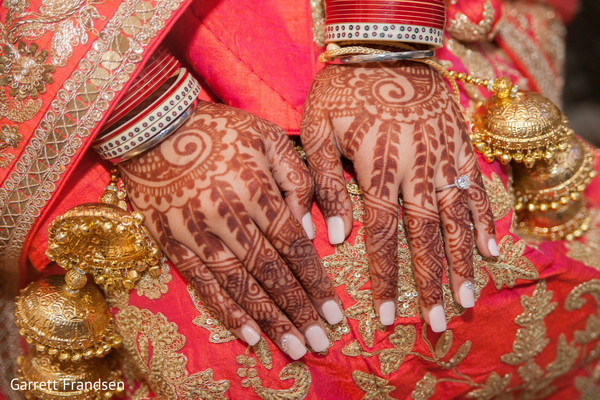 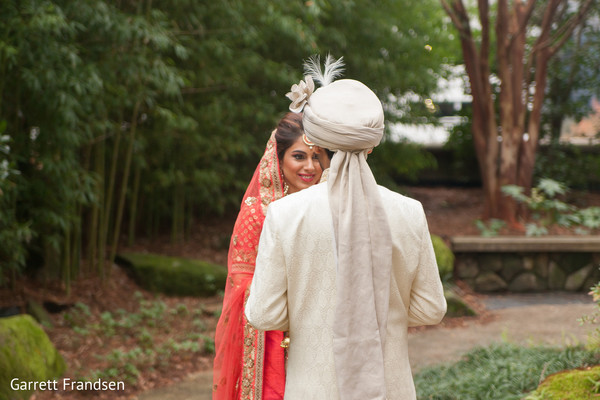 Maharani Nickita, on meeting the Raja of her dreams, Shiraz:

"Shiraz and I met through some common friends in March 2010. I had just moved to Georgia in August 2009 for grad school and visited Atlanta a lot to hang out with some friends I knew from Michigan. One night they hosted a pre-game at their place and we all went out as a group after and had a great time! Shiraz and I had an instant connection and were so comfortable around each other it felt like we had known each other forever. Perhaps there was a chemistry that we both didn’t pay attention to at first. I always thought he was really good looking and no-brainer he thought the same, haha just kidding. Several hours and pictures later, Shiraz asked me for my phone number so he could come to a "UGA football game" - low and behold 3.5 years later he has YET to go to a football game!

After that night we parted ways and didn’t meet for a while. We were both in different phases of our lives and continued to be “friends” through Facebook. It wasn’t until a while later that we started talking and hanging out often. With time, we had started to become really good friends and it felt like I had met someone that truly understood and cared about me with wanting nothing in return. Our friendship was refreshing and unconditional. Not sure if it was our personalities, love for food or similar morals and outlook on life that brought us together but I just knew there was no turning back. Endless phone calls, emails and chats about the most random things made me realize that we belong together (apparently our friends knew this all along!).

Shiraz finally asked me out and took me to our first official date to the Taj Mahal in India. Soon after we started dating he moved to Athens to be closer to me (God bless his soul and patience for driving to and from Atlanta for work, almost everyday), the rest is history."

"My proposal was truly spectacular and was all I could’ve ever dreamed of and more! Although I knew it was coming, it was still unexpected and a complete surprise to me. Now this is huge because usually Shiraz can never keep a secret from me and let's face it, I’m pretty nosy and really love-hate surprises!

It was the day after Christmas and Shiraz insisted we went to Barnsley Resort to check out their Christmas lights, the venue as a potential place we could have our wedding someday and just use it as a get away. This resort is special to us as we celebrated our one-year dating anniversary there as well. As per usual, I didn’t make this easy because I insisted it was too far and found every possible excuse to not go. After a long car ride and stopping several times to go to the bathroom (boy, was he nervous!) we finally made it. When we get to the reception, Shiraz said wanted to go to the bathroom, AGAIN! (I know – I also wondered what his deal was but this time it was actually because he forgot the ring in the car!). We finally are greeted by this wonderful lady who suggests we go straight to the main Governors cabin where they have most of their receptions, but first takes us through the resort on her golf cart to check out how beautiful it was during this time of the year. She was right, it was extremely festive and picturesque! We finally get to the golf course, where she hands us a torch and asks us to walk up just a bit toward the hill, then take a right. I was confused about what kind of tour this is where you don’t even get escorted around the area and started complaining about it. During which, a man hiding behind a tree starts playing the guitar, the very first song Shiraz ever dedicated to me followed by my favorite song at the time (mind you, I was still complaining about the lady not escorting us, and missed almost the first entire song!). As soon as they started singing the song, a 70-foot wide sign on the hill, suddenly lit up saying “Will you marry me?” and of course I missed that as well, because that time I was confused about why a random dude was playing the guitar in the middle of a golf course. Well, I did eventually get the drift and turned around to look at the sign and when I turned back around, Shiraz was on one knee asking me to marry him. Neither of us will ever remember what he said in that moment, but it doesn’t even matter because regardless that memory will live with us forever!

After that, we took some pictures and then the lovely lady (aka the “fairy godmother”) said she wanted to buy us a glass of champagne, so we walk down further and just when I had started to soak it all in. I see an enclosed area covered in rose petals and candles. And the best part? Almost everyone I love standing there, wiping their tears waiting to jump on us to congratulate us after seeing the entire thing. We popped some champagne and had an amazing dinner (thanks, Ria) and celebrated the night with some Bollywood dancing until 5 am!"

Don't miss out on this adorable duo's wedding ceremony, which is just around the corner!