I've got the most breathtaking mid-week Desi delight for you today, my friends. Maharani Manpreet, from Yuba City, California, has shared some of the most stunning portraits from her destination wedding in Switzerland with us, and it's all sorts of ooh and aah-worthy! We fell in love with this spectacular encounter from the blushing Indian bride's first look with the Raja of her dreams, Andrew, photographed by Monica Tarocco Photography. Dressed in a light cream-colored, lace bridal lengha by Sabyasachi, Manpreet added more than a touch of Maharani style to the streets of Bern during her photo shoot. Bollywood love stories pick Switzerland as a backdrop for their unforgettable romances to unfold for a reason, and this gorgeous bride and groom's fairy tale fusion is just as fantastic as any Kareena Kapoor film! Hair and makeup artist, Carmen Roy, flawlessly finished Mani's do and magnificent marital mug, and the gorgeous moments of her getting ready are beyond memorable. We're also head over heels for her incredible mehndi work by Zainab Rangwala, and will be reveling in the rest of her and Raja Andrew's fabulous Indian wedding portraits in the complete gallery! 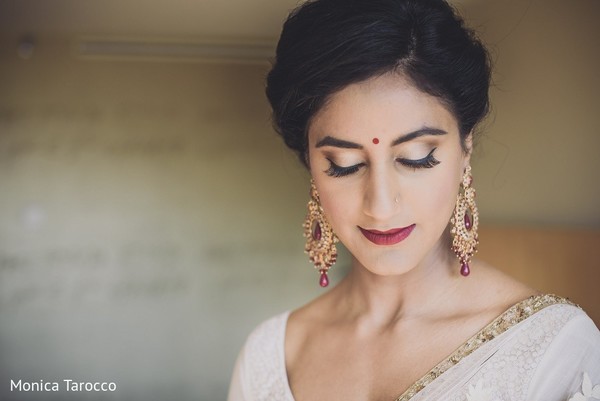 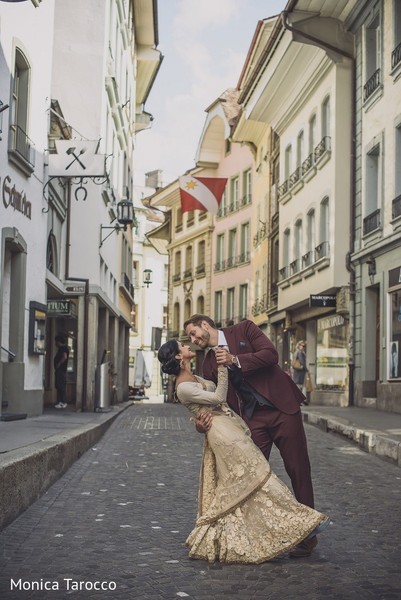 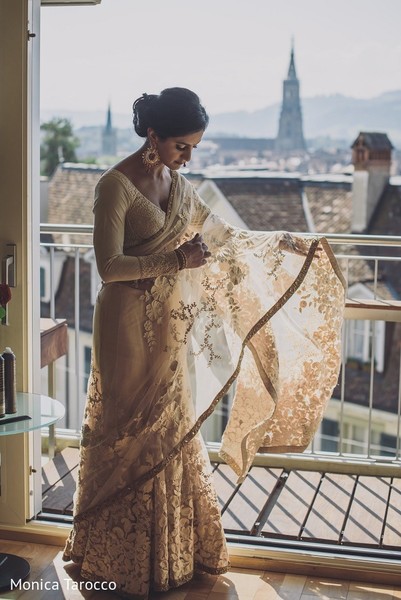 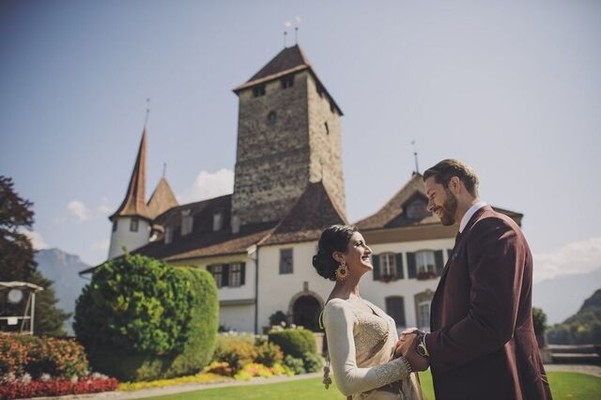 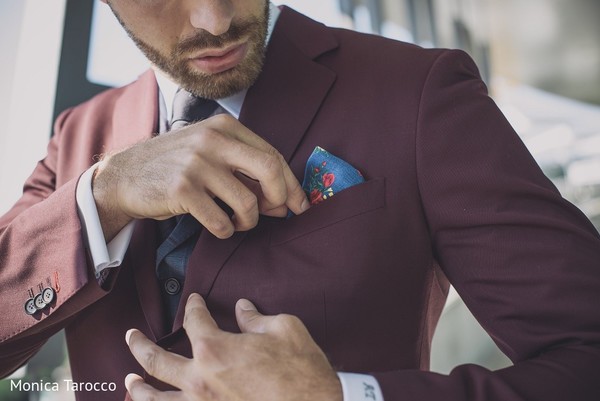 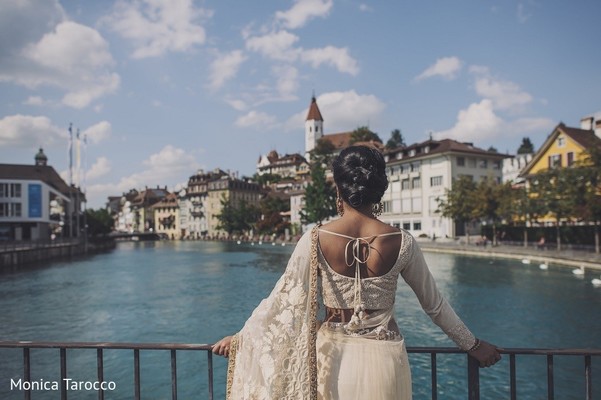 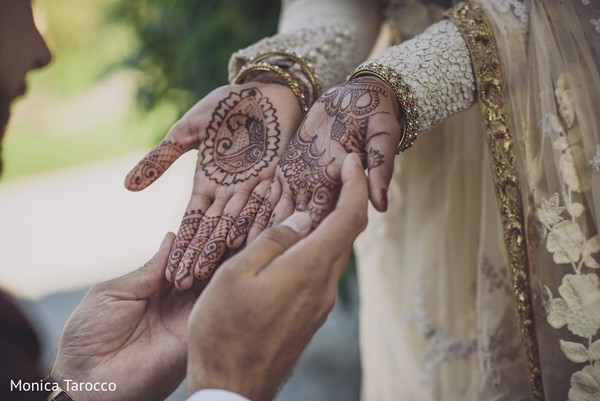 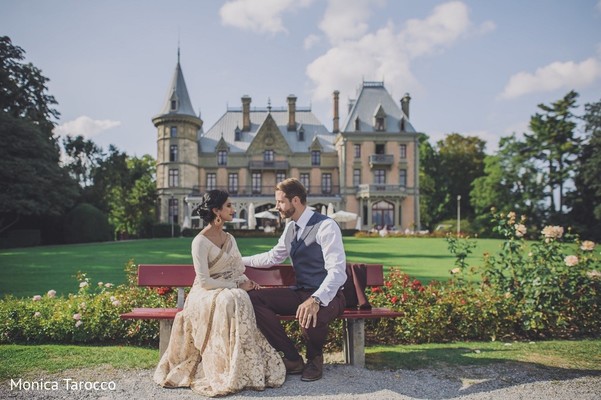 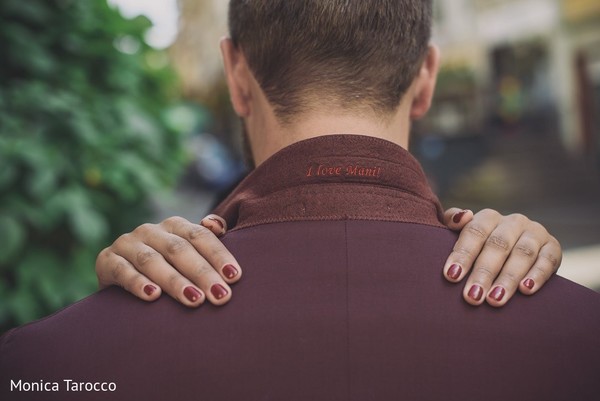 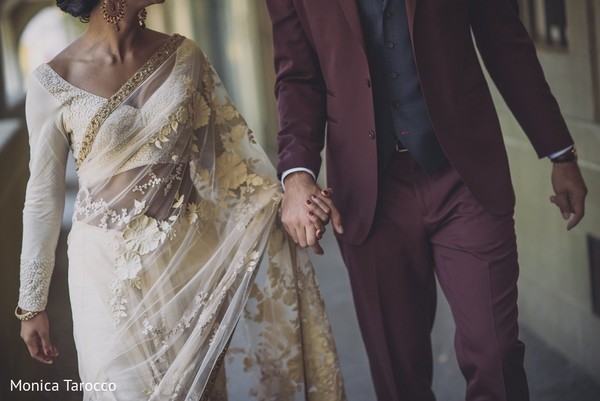 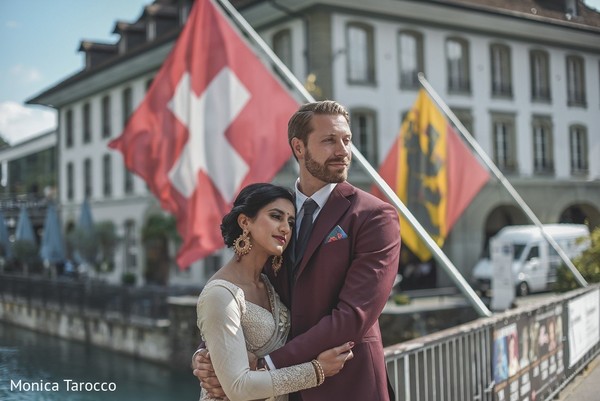 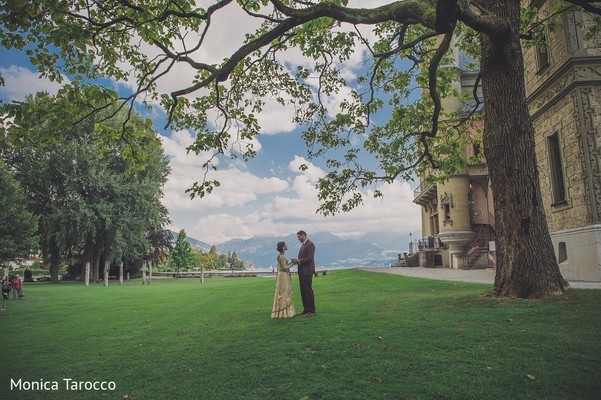 From the bride, Maharani Manpreet:

"Andrew and I could not have come from more different backgrounds. He grew up in the Black Hills of South Dakota, went to school in Nebraska and moved away to Bend, Oregon before he found himself living in Davis, California. I was born in Jallandhar, India, my family immigrated to Yuba City, CA when I was 5 years old, I went to UC Berkeley, and happily moved to Sacramento where I had always wanted to live. Both Andrew and I were happily single, and dating a bunch when we met. We each rarely spent an evening doing nothing at home.

After a couple years in Houston, TX, I was finally able to move back to Sacramento and was also crowned Sacramento's Most Eligible Bachelorette 2014! My best friend, Simi, helped me create a Match profile and also helped manage it. She would weed out the crazies and in the first few days of having the account, on July 2nd, she sent me an e-mail. It's titled"Match" and lists 4 profile names. Next to Andrew's name, she wrote, "(my fave)." So I messaged him, and asked him out for coffee.

At the time, Andrew rarely ever checked his Match because he was already so busy and social. For some reason, he checked it, saw my message and responded! He liked that I cut through the regular lame convo and suggested we meet up instead. We met at Temple Coffee in Midtown. We sat and chatted there on a Friday morning. Although it was definitely not "Love At First Sight" we were both interested in the other. I was very "reserved" he said, and he, in typical Andrew form, was not nervous at all. He asked me direct questions and looked me straight in the eye. That was a little intimidating for me, I must admit. We left deciding we would see each other again and so I messaged him the next week for drinks. This time, the atmosphere was a little more relaxing! We met at Shady Lady — we ordered drinks and we went straight into a fun conversation. Andrew loved that I had introduced him to this great place. From there, we went on to seeing each other very regularly. I showed him around Sacramento and introduced him to some of my all-time favorite places. We went rock-climbing at Pipeworks, we went on hikes in the Foothills, and at the end of August, we went on our first trip together to Lake Tahoe. It was Andrew's first time there. In November, he took me to Bend, and in December, I went back to South Dakota with him for Christmas where I met most of his family!

By January of this year we decided we wanted to live together and began looking for a house. We didn't think it would happen so quickly, but we found our amazing home within weeks and closed escrow the day before we left on vacation to Costa Rica — where Andrew surprised me with a beautiful proposal on our first night there!! We had so much to celebrate — our new home and our engagement!!

After lots of careful consideration, and creative discussions on what our wedding would look like, we decided we would elope! And that turned out to be the best decision for us. We certainly celebrated with our friends and family with dinner and dancing — Andrew went away to San Francisco for a weekend, and my girlfriends took me to Montreal, Canada, for my bachelorette! They knew how much I would miss them on my wedding day, that they surprised me with a wedding gown, they coordinated bridesmaid outfits, and hired a photographer to follow us around the cobblestone streets of downtown Montreal!

Andrew and I wanted the exchanging of our vows to be very private and sacred. And so it was."