This past Friday, we introduced you to Shivani — a Maharani who is near and dear to the Maharani Weddings family — in this stunning Filmy feature by Colorblind Production. Today, we're going to dazzle your wedding-lovin' senses with a breathtaking, photographic journey through her Indian wedding wonder in Overland Park, Kansas, thanks to the ever-adorable and talented Sachi Anand Photography! Who better to show us how a Desi dream wedding is done than one of our former editors? The talented team from Drish Couture Events planned Shivani, and her Raja Niral's, sensational celebration, which consisted of a captivating collection of pre-wedding festivities from a sangeet to a welcome dinner, and we're starting off with the first! Today's Indian bride called on hair and makeup pro, Sonia C, to help her create a flawless pre-wedding look to go with her vibrant hot pink and yellow lengha, and she's looking absolutely fabulous in these picture perfect portraits — even with a bit of rain! Her hubby-to-be complements her style with his own violet and blue ensemble, and even the tiniest guests are rocking matching outfits! Rare Air Films shot the sangeet night highlights, and we're hoping to get a peek at that soon! We'll be unveiling another pre-wedding party in just a bit, but until we do, you can fill up on more of the sangeet in the complete gallery, and maybe take a quick peek at what's ahead — including the ceremony, and a reception featuring Desi Junction DJs! 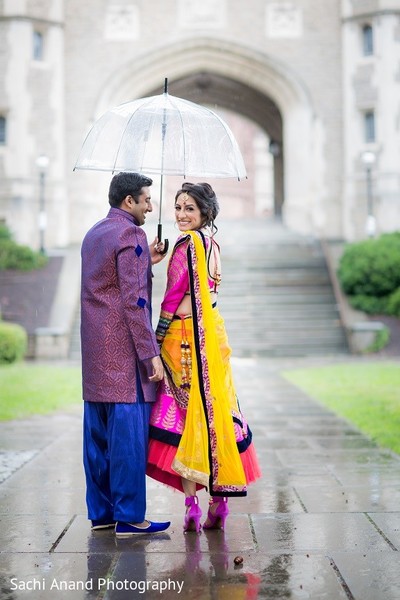 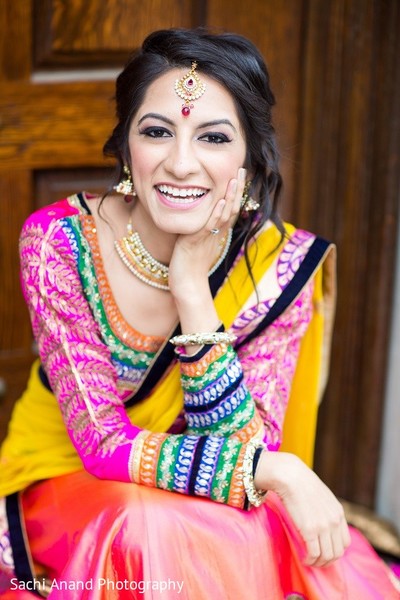 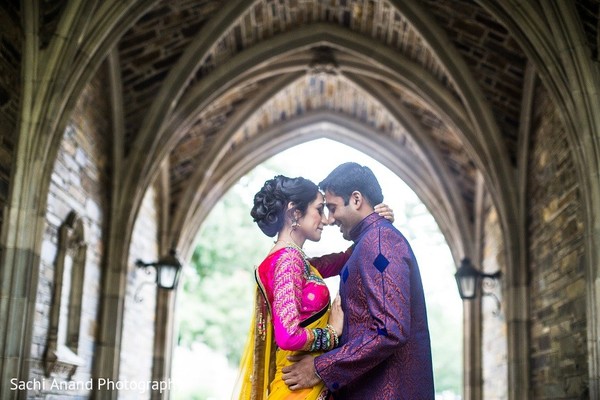 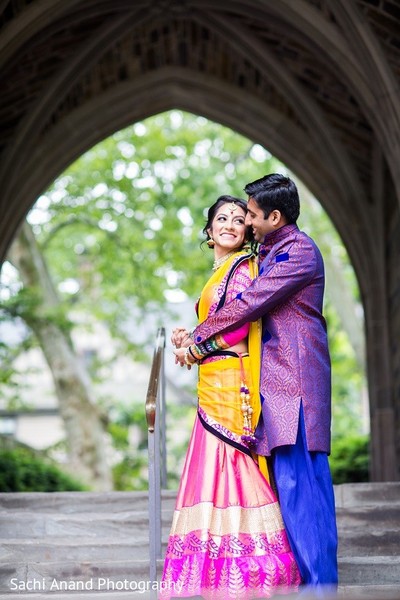 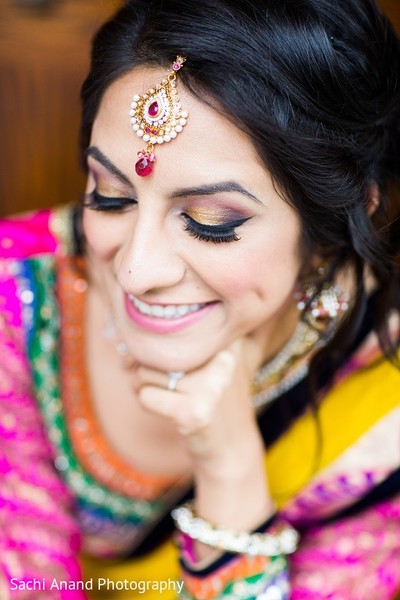 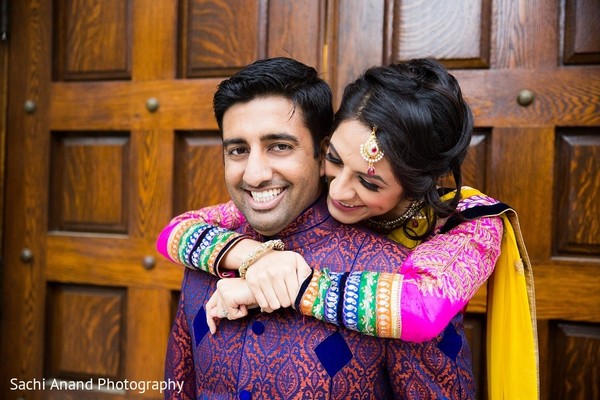 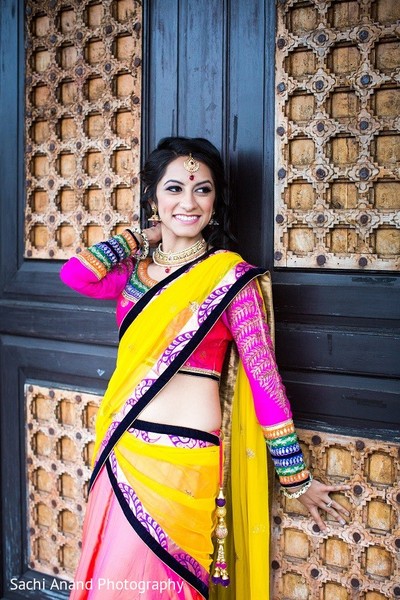 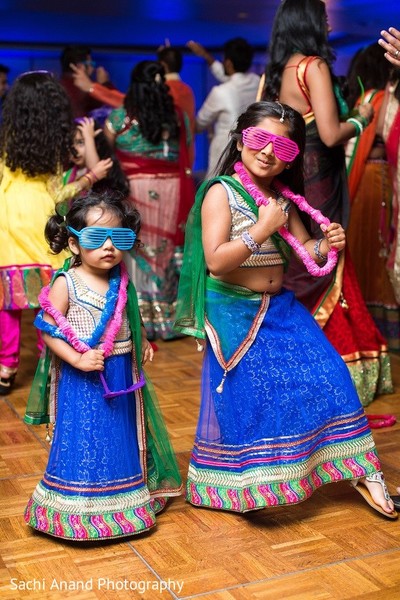 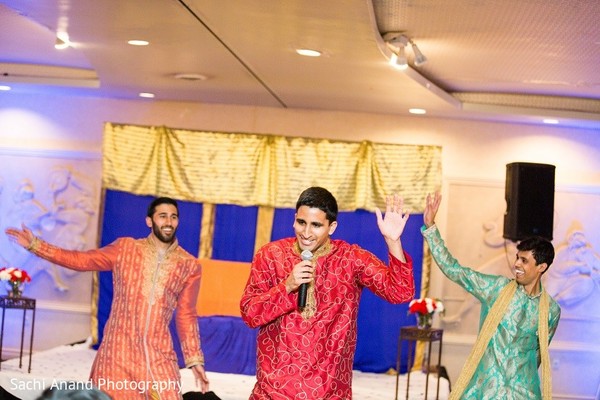 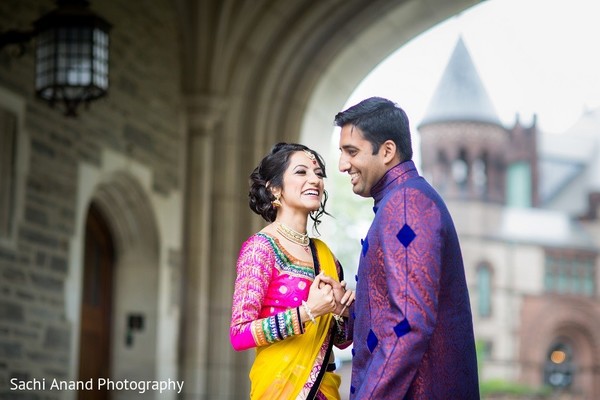 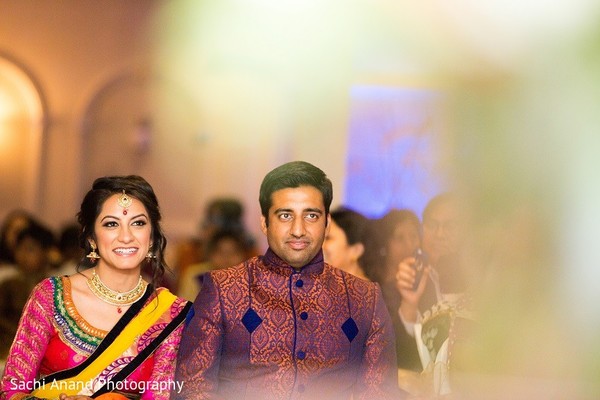 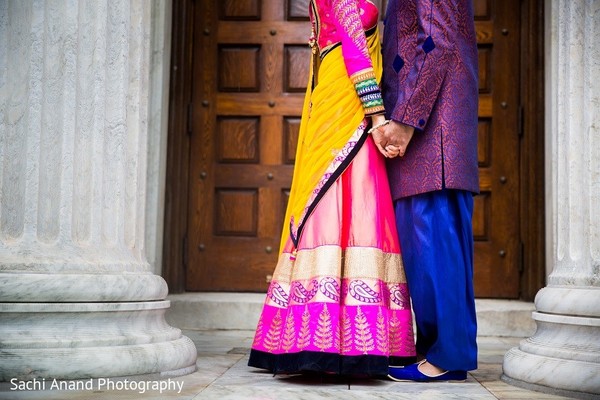 Maharani Shivani, on how she met the Raja of her dreams, Niral:

"Niral and I first began talking in October of 2013. I had just come back from New York City, where along with interviewing for a new job, I'd also had an opportunity to visit some very close family living in New Jersey, who also happened to be Niral's relatives. Their daughter called me after my trip and told me that she had a potential "rishta" in mind for me. I was definitely hesitant with the whole idea, but after learning more about Niral, I decided to give it a shot. I gave my friend the green light to pass my email address on to Niral, not expecting him to hear from him for at least a few days. Less than an hour later though, my email "pinged" and I realized that Niral had already emailed.

I realized he was the one after I made the move to NYC. It's a bit of an adjustment, moving from Kansas to New York City! Niral was my rock those first few months in the city. He supported my decisions, my dreams and always encouraged me to do my absolute best. I realized shortly after we began dating that he was the one I was meant to spend the rest of my life with."

"Since I lived in NYC, and Niral lived in Philly, we would try to see each other at least two weekends out of the month even though we were both really busy working and traveling. We ended planning out our entire month of August in terms of which weekend he would be coming to NYC and which weekend I would be going to Philly in advance, so early on he asked me very sweetly if I would go out on a special date night with him on August 22nd.

I'm actually really annoying when it comes to surprises, so leading up to that day, and during the day itself, I kept bugging him about what we would be doing, where we were going, what we'd be eating, etc. He told me that we had to be ready by 7:30, after which we left his apartment and started walking. At the time, he lived right next to the Philadelphia Art Museum, and we started walking in that direction so I assumed that we were going to a special exhibition at the museum, or some really interesting show. As we walked over, Niral would randomly head in different directions, want to take pictures with a fountain or the Rocky statue, trying to kill time before we had to be at the museum (something I was completely oblivious to). We finally walked up the steps and reached the big fountain in the center of the courtyard in front of the museum, and I noticed a photographer to my right, but because the museum is beautiful, I didn't think anything of it. Niral then pulled out a book he'd had made of our first 15 emails, with pictures of us throughout the book. I noticed he was shaking but again, didn't think anything of it. I began reading through the book, slowly, and Niral was getting really antsy, telling me to hurry up and then finally telling me to skip to the back of the book where there was a photo of us in the shape of a heart and the words "Shivani, will you marry me?" I looked at him and he was down on one knee, telling me he loved me and asking me to marry him! I was completely shocked, totally NOT expecting this, but it was absolutely perfect. He later surprised me at dinner with both of our families at the restaurant, and my best friend surprised me by flying in the next morning!"

On what she enjoyed most about planning her dream Indian wedding:

"Oh gosh. Planning an Indian wedding can be so stressful, but I think my favorite part about the whole process was seeing all of our family and friends come together to make everything run so smoothly for the wedding. From cooking to decorating and everything in between, it was truly our friends and family and our incredible vendors that made the planning process so much easier. We couldn't have done it without them!"

Join me later today for another pre-wedding wonder from Shivani and her hubby-to-to!