The awesome photographer from MaxPhoto NY gives us a wonderful shot of Sarojanie and Kamal's Indian wedding extravaganza, planned by Royal Charms Inc. Moments before there Hindu wedding ceremony takes place inside the brides lovely home in New York Sarojanie gets all dolled up with the help of hair and makeup expert, GlowZee, for her big moment to shine. And speaking of shine, this beauty is sparkling in ruby jewels which is the perfect compliments to her red lengha. She's escorted in to marry the Maharaja of her dreams. The darling pair says their I doe's inside a beautiful mandap, designed by the talented floral and decor gurus from the House of Dipali. Gaze at the gallery for lots of the details on this day! 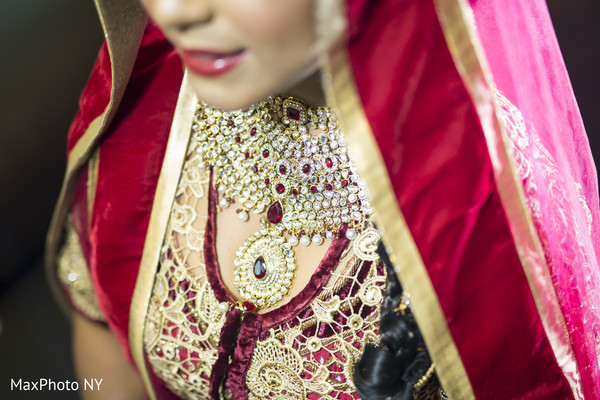 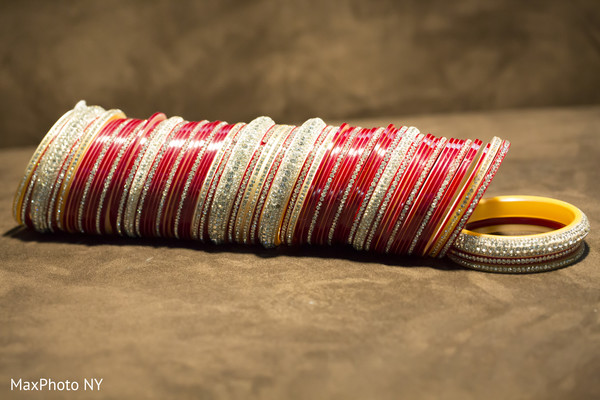 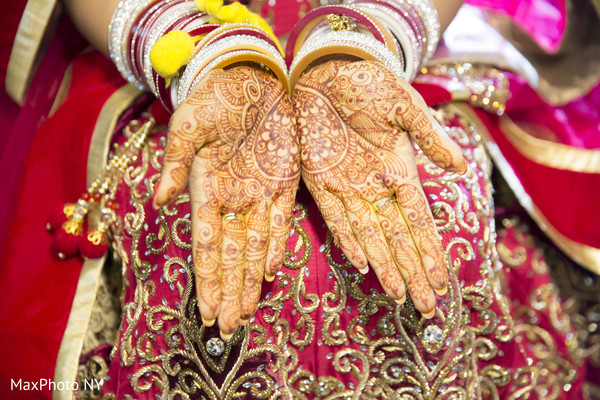 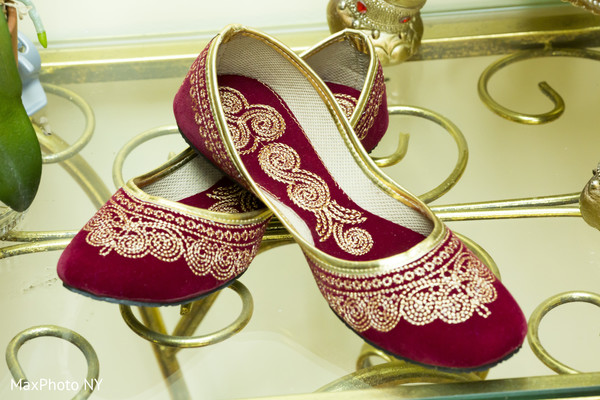 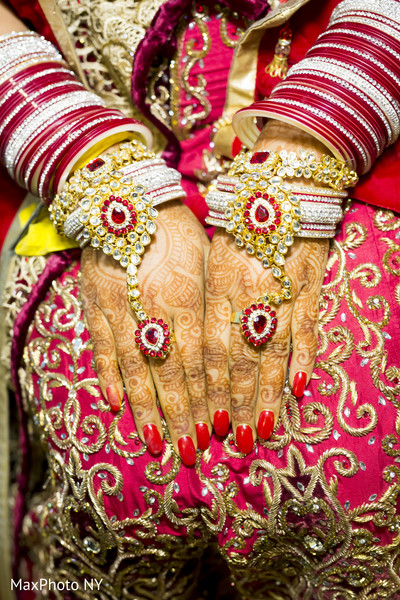 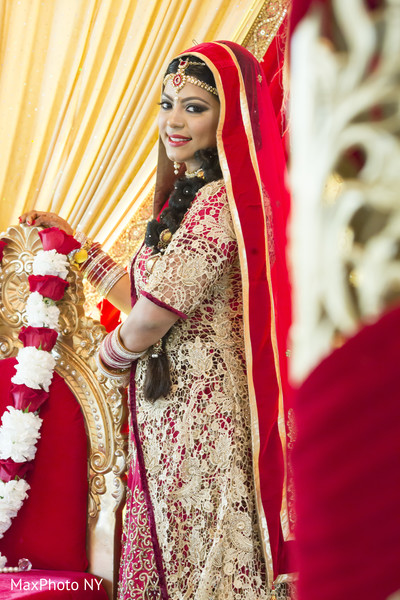 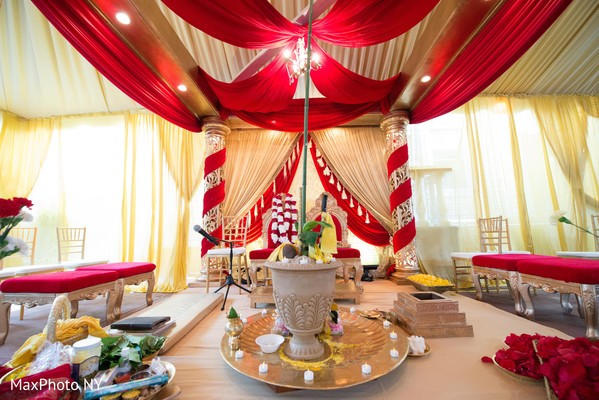 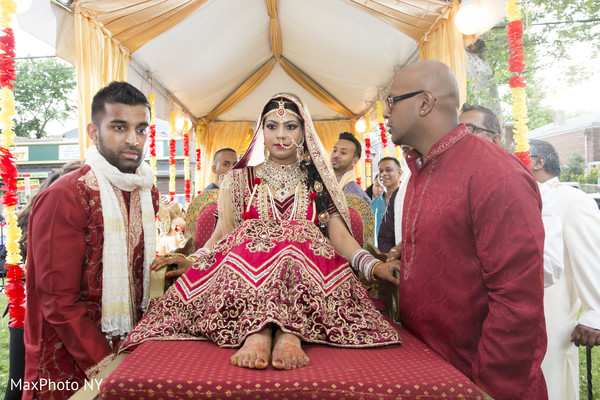 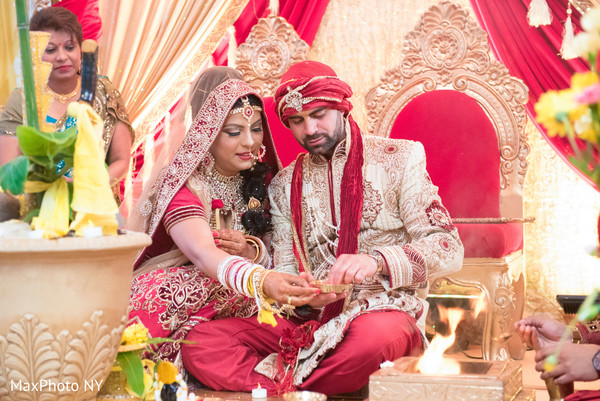 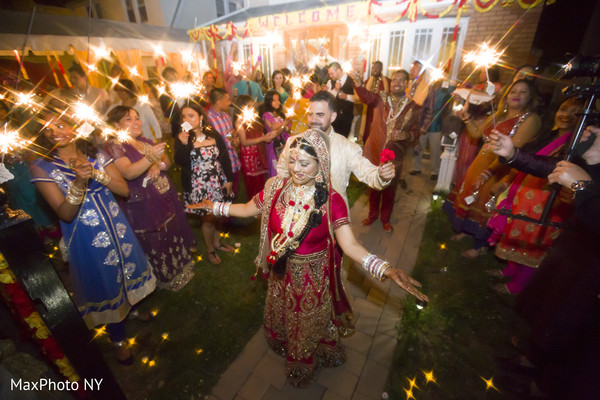 From the bride, on how they met:

"I met my Raja just a few days before Christmas 2007. A friend invited me to the company holiday party. As I spent the entire day trying to find ways to back out of attending because of a late night at work, my friend secured plans and sweetened the pot by promising me a ride home from the city. I attended and had a great time. I danced, ate, and drank to my content. I was after all not an employee and did not have to worry about office gossip the next day. Kamal caught my attention the very moment he walked into the room. I noticed he walked around the parameter of the dance floor. At some point during the evening he was directly in front of me. Not sure if it was a full tummy, the music, liquid courage, or just the holiday spirit, but I became brave enough to step outside of my character/usual behavior and engage in conversation. I noticed that he had a radio in his hand. I took a few steps towards him, swatted the radio antenna and muttered "Do you work here or something?!". He looked at me puzzled, and replied "Yes". Inexperienced and satisfied by my first attempt to strict up a conversation with a guy, I then abruptly turned and walked away. My "game" was very weak for certain. He then approached me later that evening and offered me a drink. I accepted and the rest of the night we were tied in deep conversation. There was one moment that he looked me deep in my eyes and told me that I had the most beautiful eyes in the world. At that very moment, everyone in the room disappeared, time stood still and I had to coax my heart to start beating again. It was at that very moment I knew that there was something different and special about this one."

"Kamal proposed to me on Thanksgiving 2013 in the most perfect way fathomable. We had been dating for almost 6 years at that time. Every thanksgiving since we met, we had a tradition of having brunch with my parents, before having dinner at my Aunt's. In retrospect, everyone was acting quite abnormal this particular day. My mom wanted me to set the table with champagne flutes. Instead of questioning it, I reveled in the fact that my mom, a sober-as-they-come woman, wanted a boozy brunch. I sat down to brunch in my typical Thanksgiving brunch attire, fluffy bathrobe with full hair and makeup. My brother suggested that we go around the table identifying what we were most thankful for. I realized that this was new for brunch this year and typically done at dinner. However, distracted by the champagne, I went with it. My brother went, my mom emotional about being thankful for her family, my dad was thankful for finish landscaping the yard himself, and then they prompted me. Not wanting to pry my attention away from the champagne, I summed it all up with "I am thankful for everyone and everything that has happened in my life". After my brother criticized me for "coping out", I then moved the spotlight to Kamal and asked what he was thankful for. He began by being thankful for his family, graduating and getting a job, he then started to direct his attention and affections towards me. Given that my parents/family are very conservative and rarely show affection, I was extremely caught off guard and started to panic. If I recall correctly, I may have stopped breathing. He then stood up and walked around towards my side of the table, got down on one knee. I can't remember much at this point as my face was in the palm of my hands. My brother nudged me a few times and shouted, "Well you have to answer him!!!". I looked up, saw my Raja, and said yes. It was everything I had ever expected but didn't know it. It was perfection."

On the hair and makeup:

"I definitely had a style in mind for hair and makeup. I searched relentlessly for an artist that would be able to make it all reality. I started to get discouraged until I found Zeeshan. I went with a braid for my Hindu ceremony and an classic updo for my reception day. I wanted very bold eyes for both days with a rich red lip for the Indian ceremony and a softer lip color for the reception."

"I wanted a lengha that was different, yet simple. I wanted it to be tradtional with a mix of old Bollywood and Indian royalty. I did not want a ton of stone work, so I opted to have a traditional red gown, with maroon velvet trims and heavy gold thread work. As a twist, I had the designer create a gold lace robe that I wore over my jacket and skirt for my initial appearance under the mandap. I paired this with a simple red dupatta and pearl jewelry. Finalizing my custom lengha, robe, and jewelry was a nightmare. I thought that getting ahead of designing and ordering my dress in advance would have been simple, especially since my family had used this one designer for years/multiple weddings. They made a mistake with my robe. The lace was not what I wanted, yet they refused to change it without additional costs. Instead of getting my approval prior to making the unique robe, they went ahead an made it with what ever lace they had availble. I later saw a dress in their store with the lace I wanted and when I told them they said I would have to pay the full cost again so that it can be remade. They also altered my design without asking. Instead of getting upset, salvaged the robe and moved on from the incident. I had ordered two dupattas, a red and a gold. I wanted to be able to change between the two parts of the ceremony. They never got my second duppatta order correct. Very last minute (days before my wedding day) I had to take a duppatta from a mannequin in the store that would work. Lastly, my custom jewelry was not what I wordered. They only produced cheap gold jewelry. I was so upset after all the mishaps that I cried in the store. They then walked me down the strip and bought me what ever jewelry I chose that most resembled what I ordered. They then had their jeweler modify pieces to what I wanted. It was the most stressful experience I had throughout the entire process. I will never recommend this designer again."

The couple's portraits are up next!