Today, we're flying off to Massachusetts for an Indian wedding extravaganza—planned by the renowned Alankar Event/Wedding Planners! Thru the watchful lens of Symbol Photography, we get to see the beautiful bride getting ready for her big day! I am totally taken aback by the marvelous mehndi design—courtesy of the highly skilled Henna Cafe! The intricate artwork looks perfect with her red polished nails! Hair and makeup artist, Shreni Patel , gives our Maharani well-defined brows, shimmering eye shadows, a glossy red lip, and a charming updo! Decked out in gorgeous gold jewels, this lady in red is ready to marry the man of her dreams! Stay tuned because we've just begun the ride on this wedding roller coaster! And with vendors like Konditor Meister lending their tasty support, you don't want to miss a thing, but until then, skip over to the gallery for more beauty tips! 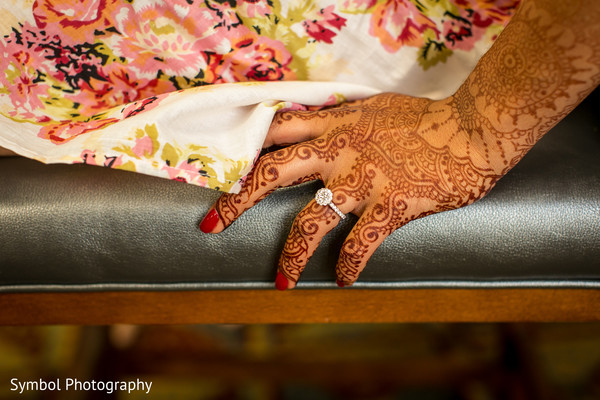 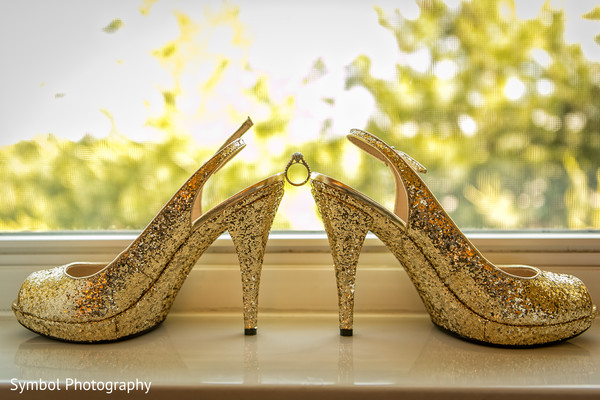 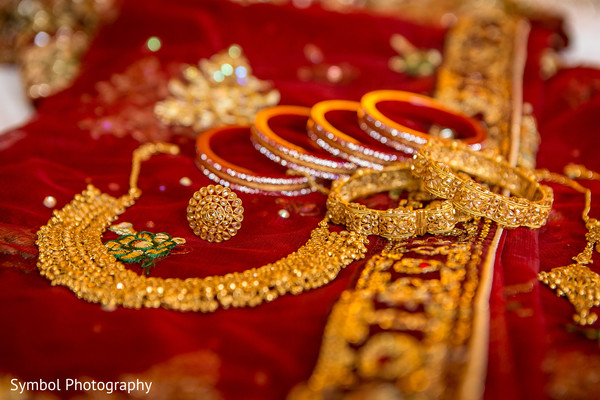 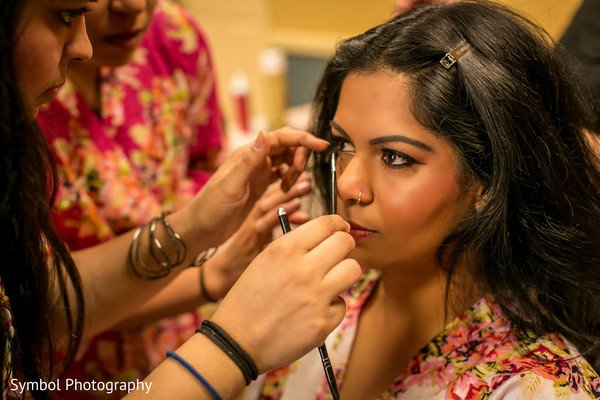 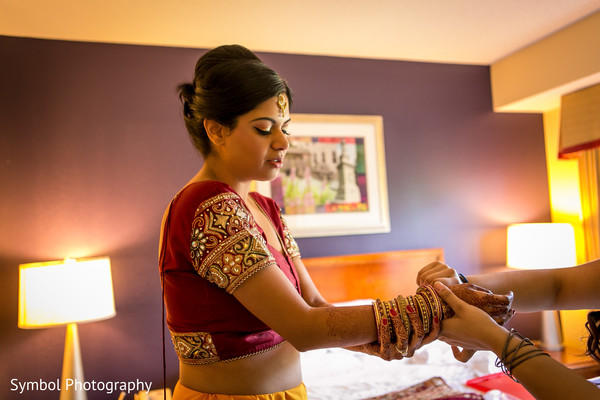 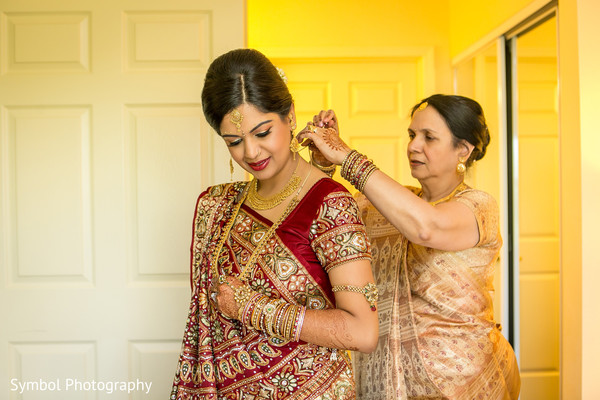 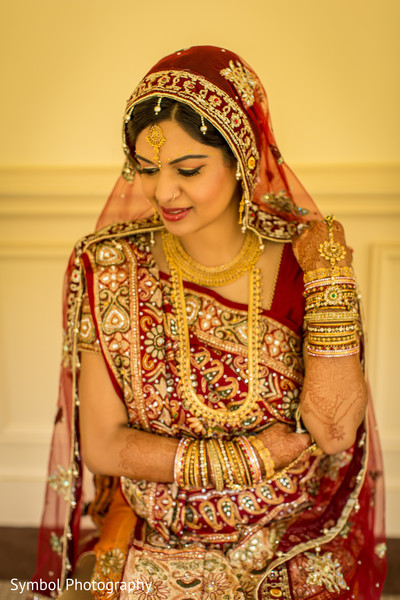 From the bride, on how they met:

"Vishnu and I met online on OKCupid.com. We were both always near each other but it was OKCupid that brought us together. We both went to Undergraduate in Worcester (I at The College of the Holy Cross) and Vishnu at Worcester Polytech Institute), we both lived in Shrewsbury, MA after college and both bought houses in the Metro-west Area. Even our parent's have common friends. But until we met online we did not know each other. Our first date was at a Starbucks in a Barnes and Noble Bookstore in Natick, MA. We ended up closing down the store just sharing stories of our past and what we wanted for our future. We both were really relaxed, casual and there were no games. We just talked about everything! At the end of the night Vishnu walked me to my car and asked if we could meeting again. I instantly said yes. We kept meeting afterwards. As I got to know Vishnu better I finally started believing in Fate. We were both the first to be born outside of India within our family, we were both middle children, we originated from the same part of India, and our names both started with a V. But beyond that, we both had common interests, goals, religious views, political views and family relationships. It was as if I found my soul mate. For weeks I was giddy and just SUPER HAPPY. After dating for a month and a half, Vishnu suggested we "go away." He suggested driving to a place we had both never been to. So we spent the following memorial day in Quebec City, Canada. On our 8 hour drive there, we discussed everything we were both feeling the past couple of months and our future. It is my fondest memory.  When we finally settled at our new destination, we both confessed our love to each other. I am not sure if it was the romantic location, getting away from all the responsibilities back home, or the fact that on our drive up to Canada we both realized we found our soul mate. It was on that trip we both realized we were each other's " the one."

"Vishnu proposed to me at Long Point Lighthouse on October 18, 2013. Long Point Light is an historic lighthouse at the northeast tip of Long Point in Provincetown, Massachusetts.  Provincetown is a New England town located at the extreme tip of Cape Cod. Vishnu and I had visited the lighthouse earlier that summer after a very scary but rewarding 6 mile trek over a rocky jetty and beach. I was very apprehensive to do the walk, but I trusted that Vishnu would "rescue" me if anything went wrong. I expressed my trust along the way. On this walk we had a very intense conversation regarding out future. Where we saw ourselves in 5, 10, 15 years. And then when we finally reached the lighthouse we knew one day we were going to get married. So naturally when Vishnu was thinking of a place to pop the question, he knew he wanted to take me back out to that lighthouse. That day in October was unnaturally warm. It was 70 degrees and sunny. We spent the early afternoon visiting our favorite spots on Commercial Ave in Provincetown, MA. We started walking out to the lighthouse right at the tail end of high tide so we could make it back by low tide. On our walk out, I noticed Vishnu was usually quiet. I didnt think much of it. I was chatting on about everything under the sun, feeling braver than our previous walk as I had done it before. On our way out there, we saw a lot of sea life- including star fish, crabs, and seals. When we finally made it to our destination, a seal popped right out of the water. I started screaming pointing it out to Vishnu but he seemed distracted. He pulled me back closer to the light house and kissed me. He said "these past 7  months have been the best days of my life." And then he slowly pulled a box out of his pocket and got down on one knee. Naturally, I started freaking out scream "Oh My God." There was no one else out there. Just us. He told me he wanted to make me his wife. He wanted to be as happy as he was the past 7 months for the rest of his life. I of course said, YES!!!! Once he put the ring on me and we kissed, some random guy walked by. Im not sure where he was hiding during the entire proposal but he was able to take a picture of that beautiful moment. On our way back to shore, something spectacular happened. The sun started setting over the mile long jetty we just walked over while the full moon was rising over the lighthouse. And at that moment, 40/50 seals popped out of the ocean right by the light house while a sailboat went by. It was a scene out of a fairy tale. Later, I painted that scene  into a panoramic surprise painting for Vishnu as a wedding gift. Our photographer captured the moment when he first saw it our wedding day. Our photographer also went out to Long Point Lighthouse and Provincetown for our engagement photos."

On the hair and makeup:

"Shreni Patel did one of my friend's hair and make up. When I started the wedding plans Shreni was one of the first people I contacted. I loved her style of sophisticated and natural. I dont usually wear too much make up so I didnt want to be caked on with make up the day of my wedding. I wanted neutral tones that went with my dress but still didnt look too over the top. Shreni did a trial with me. I told her I wanted my hair up for both the events but she encouraged me to wear it down for the reception and I am so glad I did. I pulled my hair to the side for the reception and shared a photo I found on pinterest that I liked. I worked with the florist to get some small roses to put in my hair to add a pop of color during the reception since my dress was white. Shreni did a lot of sparkle for my eyes during the reception and I loved it. I really trusted her with it and I really left it to her to tell me what she felt would look best on me. She did my hair and make up for my engagement party, mendhi and sangeet, wedding and reception. She also helped me get ready for all the events. I let the bridesmaids and maid of honor pic what hairstyle they wanted and Shreni's staff helped them with their up-do."

"Though we are from Uttar Pradesh, India, my parents and I went shopping in Ahmedabad, India for the wedding. A bunch of my friends went shopping in that location and I loved their style. I wanted a traditional sari for the ceremony. At first I was looking to buy an orange Saree  but when we went shopping I fell in love with the sari I got. It was a deep traditional red sari that transitioned into rust orange. It had all the orange beading I was looking for. I also wanted a sari dupatta that had little bells that would fall over my face to go along with my sari. I found that in UP."

The ceremony shots are on their way!